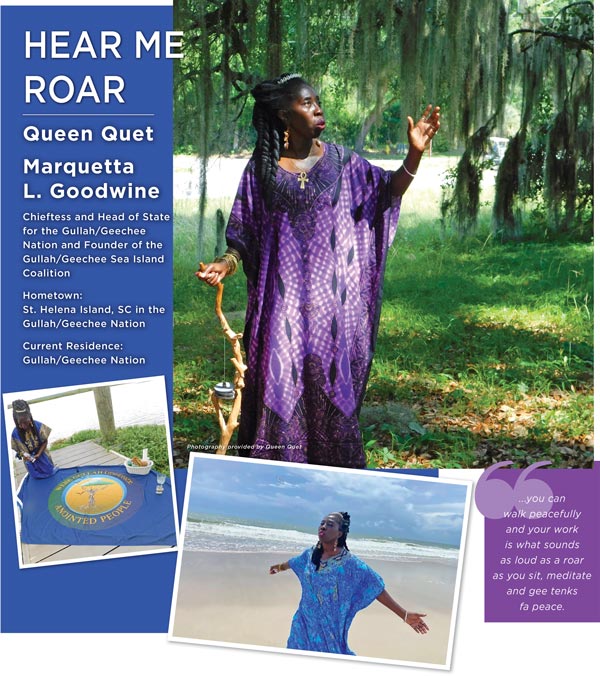 What is the origin of your name and what is your role as Queen Quet? The origin of the second name I have been given in this life originates from my birth name. I was enstooled as a Queen Mother and spiritual leader, as well as political leader, of the Gullah/Geechee Nation on July 2, 2000. At this time I was renamed "Queen Quet" as a part of that historic ceremony at Sullivan's Island, S.C. I am the first Queen Mother for Gullah/Geechees.

You have accomplished so much for the Gullah/Geechee Nation, tell us what you feel has been your most meaningful moment/accomplishment? My most meaningful moment was the day of my enstoolment when Gullah/Geechees from the Carolinas, Georgia and Florida came together to stand on our human right to self-determination, and a year long election confirmed me as the spokesperson and elected leader for the Gullah/Geechee Nation. It showed that my people believed in the work I had already been doing for decades, and that they trusted I would be an effective leader for decades to come. Having the trust of my people has been a tremendous accomplishment!

What are you working on now? There are not enough pages in Pink to write out all of the things I am working on now! So, I will keep it simple. I am working on what GOD has directed me to work on for the past four decades—Gullah/Geechee cultural continuation on the land that we own from Jacksonville, NC to Jacksonville, FL. That work includes ensuring environmental sustainability, resiliency and Gullah/Geechee self-sufficiency.

Tell us about your international missions. My international missions have been vast, and they have truly been blessings! There are many more to come so that the work on the United Nations level will continue and the relinking of the Gullah/Geechee Diaspora is fulfilled. Currently, I am focused on the United Nations Sustainable Development Goals, and I am continuing the international work from my home base due to the pandemic. I am also a part of the Climate Heritage Network, which is an international organization focused on ensuring the continuation of cultural heritage in the face of climate change. The work that I am doing at the international level is now informing the work on the ground in the Gullah/Geechee Nation, as well. I am currently engaged in providing input based on the knowledge and expertise I have gained via my international missions in a number of 30x30s and resiliency planning efforts.

What or who has inspired you to become the force you are? GOD inspires and quickens me daily.

What is a desire deep in your soul you haven't accomplished yet? I deeply desire unity in the Black community, especially in the Gullah/Geechee Nation. This is not something I can simply accomplish, however. This is something that has to become a collective desire for Black people to do, which will require consistent deprogramming, healing, reprogramming and redirection away from negative spiritual energies and assimilation that have many seeking to profit, instead of being prophetic.

Describe yourself in three words, and tell us why these words. Faith-full, Gullah/Geechee, Art-ivist! I am The Gullah/Geechee Art-ivist that is filled with faith in GOD because I have seen what GOD has given me the ability to do and to overcome. I do my activism for my people through the arts and created the title "The Art-ivist" to ensure there was an accurate word for who GOD called me to be. Tenk GAWD e anoint me fa be Gullah/Geechee! I livin disya ting loudly!

If you could share an afternoon and a meal with anyone (living or deceased) who, why, what? I have several folks who come to mind, but I would likely spend my afternoon with Jesus on the top of a mountain, or alongside a body of water to discuss being an African leader and visionary, and how to consistently rise above the ongoing encounters with those feeding from the fruit of the flesh instead of the fruit of the Spirit, in order to fully evolve into GODLY oneness and move on to the next realm of existence.

What are you currently ROARING about? Given that I am not a lion, I do not roar. However, I am standing as a living example of what Gullah/Geechee, GOD-directed leadership is, and how when you live in accordance with the vision and purpose that GOD gives you, you can walk peacefully and your work is what sounds as loud as a roar as you sit, meditate and gee tenks fa peace.