Tired of Waiting for Her Next Adventure 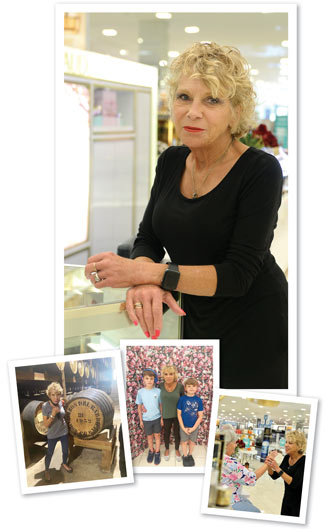 Pat Green Clark grew up in the country near Asheville, NC. “We were really poor,” she said. “I never even had a bike. I worked in the tobacco fields and the garden, and I had no friends. I was so shy.” The most exciting day of her childhood was when her daddy took her to a tiny amusement park where she rode the rides, ate junk food and enjoyed ice cream. “That was a really big deal for us, a big thing,” Pat reminisced.

Pat left Asheville at age 40 to visit a friend in Hilton Head. Less than a year later she moved into a condo on the beach, requested a job transfer to Belk on Hilton Head and carved out a life in the Lowcountry. She is affectionately known as the Estee Lauder lady at Belk, where she has been one of their top salespeople for 35 years. “Belk is family to me,” Pat said. “I’ve been to customers’ weddings, funerals and baby showers. I even get Christmas presents from some. They trust me.”

“I think I’m a late bloomer,” Pat said. Once she joined a group of girlfriends who decided to take a motorcycle class on a track. “I had trouble balancing the motorcycle, probably because I never learned to ride a bike,” she said. The problem was solved with a Voyager kit that turned her new motorcycle into a three-wheeler. Once, after a road trip to Georgia, Pat was crossing the bridges back home to Hilton Head when she hit a metal plate on the road and the motorcycle flipped. She was treated at the ER, but unfortunately, a broken hip was not detected. Pat said her hip was not repaired for almost four years.

In January, 2022, at age 70, Pat traveled to San Juan, Puerto Rico, with a friend who treated her to the trip. They decided to go on a group excursion to the El Yunque National Forest to hike through the rain forest to see the waterfalls. The 6-hour trip covered three miles. The hiking trail is challenging and not recommended for those over age 60, Pat explained. She also had a hip replacement and suffers from scoliosis. None of that stopped her from giving her all to complete this adventure.

The trail is uneven with rocks and fallen trees, very steep slopes and difficult sections with streams and river crossings, and the humidity and rain makes the trail slippery. “On the way up to the falls it was muddy, and I’d slip and slide. I accidentally slid into a gully on my back; it felt like a little grave, “ Pat said. A young man in the group pulled her up the steep embankment. “I think I amazed the others that I could climb. Then we also went out on a sailboat, and I don’t even swim!”

Pat has parasailed in the Bahamas, explored the Amish country in Ohio, flown over the Grand Canyon, gone to the Hoover Dam and visited Las Vegas. Years ago she won a sales contest, winning a cruise to Greece. She is excited to start traveling again and to start a new phase in her life.

“Now is a time of new beginnings because I’m about to be single again. I want to learn more confidence, do things by myself—go places, do things and make good memories with my boys,” she said. Pat has two great grandsons.

Pat can be found sporting around town in a red Toyota Solara convertible, and she now owns an RV that she wants to fix up and hit the road. To build up her confidence, she plans on taking a school bus driving class to learn how to drive such a large vehicle. Then she wants to head West to visit Wyoming, Colorado and Arizona, where a friend lives. “I may even get another motorcycle and pull it behind,” she said. Pat also wants to travel to Maine and New Hampshire.

“I don’t need the Hope diamond or fancy cars. I work out with a personal trainer every week to build strength. And as a single woman, I don’t want to be dependent…but I do want to be able to defend myself,” Pat explained. So she’s looking into self-defense classes, too.

“I’m tired of waiting.
I want my new life filled with adventure.”

Up Close:
Ain’t Life Grand: Pat has two great grandsons—Dominic, 9 and Chance, 11. She loves to take them to dinner and go to the game store for new video games. “Sometimes their mama, Ashley, doesn’t approve of more video games, but it’s my job to spoil them!”

Work is Life: Pat’s job at Belk is also her social life! She loves it.

Nailed it: Getting manicures and pedicures is Pat’s favorite guilty pleasure.