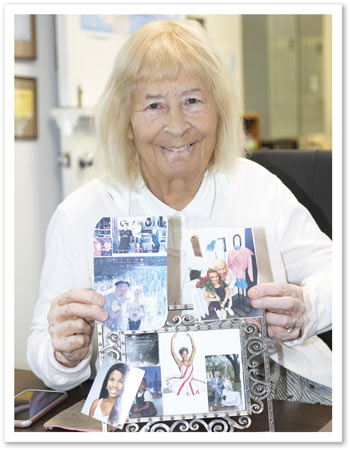 At only 14 years old, Pamela-Joy O’Grady knew exactly what she wanted her life to be. She made a conscious decision to marry a tall man who was rich enough to give her a lifestyle she wanted to become accustomed to. Her goals were to travel extensively, have lots of kids and serve God.

Pamela-Joy was born in England and lived in London. At 19, she landed a job in France and worked there for a few years. “Then at 21 years of age,” she said, “I made my list. You know, a wish list, everything I wanted in a husband. He had to be tall, handsome, he had to have attended the same type of school as I went to, and he had to have brothers and sisters, because if he was an only child, I felt he would be spoiled.” She quit her job and returned to England to find him.

Ironically, that same year she trekked down to Malta with a girlfriend, and one night they went to a dance club. All the girls were swooning when a particular young man appeared. He was tall, handsome and well-heeled. So while her friends were chatting about what a great catch he was, she set her sights on him. Five weeks later they were engaged, and 18 months later, Pamela-Joy married Will O’Grady.

Pamela-Joy said it all worked out, and her dreams were realized. After her marriage to Will, they lived on several continents—South Africa, Australia, England, Switzerland, and eventually, America.

And yes, she had lots of kids—three biological, one adopted—and this Mama Bear fostered 27 newborn infants, too.

Her son, Tristan O’Grady, said, “My Mum has dedicated her life to her family and also making the world a better place by spreading the Gospel of Jesus Christ. From opening her home to biker gangs in the midlands of England, to fostering many, many children here in Beaufort County, Mum has been a true giver in every sense. Her love of Christ and of her family have been her priority, and never has she made a decision that put herself first. I’ve had a very blessed upbringing and it’s always nice to hear from local people, who I often run into around town, speak so highly of her and my dad for their outward kindness and love in the community.”

Pamela-Joy and Will have two sons: Kieron, age 47, and Tristan, 46. Their daughter, Rebecca Jane is 34 and lives in France where she and her husband are both teachers. Sarah, who was adopted after Pamela-Joy took her in as her very first foster baby, is the youngest. She is now 22, a graduate of the University of South Carolina, living in Miami.

“When I got her, Sarah was only three pounds and four days old. We quickly found that we wanted to adopt her, but we were told we ‘were the wrong color.’ It was rather racist, but that’s how it was in those days. David Beasley was the governor of South Carolina, and I was friendly with his wife, so I made an inquiry. I think he may have interceded in some way, but I really can’t say. But eventually we were able to adopt Sarah.”

Pamela-Joy said when the O’Grady’s moved to America it took about two years to really get settled. Once the children were enrolled in school and the family was acclimated, as an Evangelical Christian, she knew she had to find a way to help others in a significant way.

“So I prayed,” she said. “Lord, what am I to do? The next day I was talking to another mom at the school gate. I asked her which child was hers. She said, ‘That one, that one, that one and that one.’ She pointed out several children who all looked to be about the same age, so I asked how that was possible. ‘I foster them,’ she said. At that moment, I knew that’s what we were meant to do. God had answered my prayer.”

“My husband wasn’t all that anxious to foster kids, but he always turned into the amazing dad that he is. Even when we had to feed babies every two hours,” Pamela-Joy said.

She explained that nearly all the newborns she fostered were “crack cocaine babies.” “They are very tiny and feeding is the hardest part. It takes about two hours to get two ounces down them. They need so much sleep. And I held them always in order to bond. You have to hold them because they shudder.” Pamela-Joy explained that she felt that fostering these infants would also help social services having someone available to take care of them.

She has advice for anyone who might be interested in fostering children. “Do not get a foster baby until your teenagers are grown because you have to watch the baby all the time.” And her best advice for all mothers with school-age children is to have a snack ready when they come home from school. “That’s when you get all the news…while it’s fresh. If you wait ‘til supper, it’s gone.” Snack and listen!

Up Close:
Brush with The Beatles: Pamela-Joy was kissed on the cheek by George Harrison of the Beatles. When she was 12 years old and living in London, The Beatles rented a house around the corner from her home. “We saw their Rolls Royces and bodyguards, but we never saw any of them. Then one day I saw George Harrison being chased by a bunch of girls. I was just opening my door, and I told him, “Quick, in here! We went up the elevator to our apartment, and I told him if he climbed down our fire escape he would be able to turn the corner to Green Street and get where he needed to be. I asked for a kiss on the cheek. I should have asked him to have tea!”

Still Loves to Dance: Pamela-Joy enjoys visiting the Big Bamboo Café, both for the music and because her sons, Kieron and Tristan, are the owners!

Keeping it in the Family: Her husband and sons all work in the real estate industry. Will markets business properties, Tristan is a realtor and Kieron is a mortgage broker.