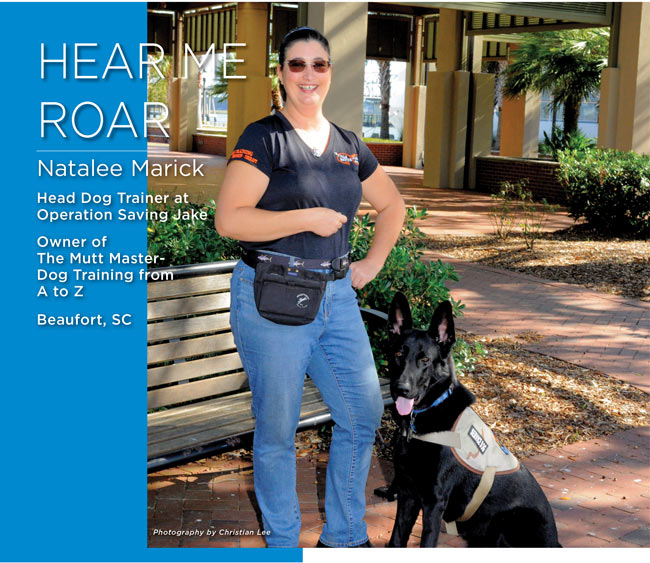 Why did you join the US Marines?
There are quite a few reasons why I joined the United States Marine Corps. My mother passed away when I was 17 years old. 13 months later, my grandfather passed away. When my mom died my family was thrown into a whirlwind of chaos. I have a twin brother named Dustin. He and I found ourselves with nowhere to live. Friends and their families helped us along for a while. I had dropped out of school to take care of my mom while she fought the good fight against cancer. After she died, I went back to the principal to find out what I had to do to graduate. We were not on very good terms because I was unruly and unpredictable. I’m not sure what else you should expect from a teenager who has just lost everything she knows. I know now that the principal and the teachers cared deeply for me, but back then I was filled with despair and anger, so I was blind and did not understand what was happening and why. I struck a deal with the principal, though. Guaranteeing the best behavior I was capable of offering, I went back into the classroom, attended TCL (Technical College of the Lowcountry), attended adult ed, which is a program for pregnant teens, and rode a special-needs bus home as a school bus monitor. I was able to make up the year I lost and complete the year I was attending and graduate with my class on time. After graduation I became a couch surfer and bounced around to any open door that would have me. The three main people I remember being most instrumental during this time are the families of Laura Drane, Karen Brenenstuhl, and a teacher named Miss Joan Thompson. If any of you are reading this article, I thank you from the bottom of my heart for being instrumental in saving my life. I ended up moving in with my grandmother right around the time that my grandfather died. I told her I wanted to go into the Marine Corps, and she forbid me. Naturally, I signed up the next day.

How did you go from being a Marine to a dog-trainer?
I grew up on the beaches of Hilton Head Island. Back then there were no leash laws, and there were always dogs running loose. My parents had poor husbandry skills, and our dog was always looking for love in all the wrong places; it seems like she had puppies all the time. I learned from her interaction with the other Island dogs how they communicated to each other. I nurtured these skills with my own dogs and was routinely giving people advice on how to fix their pets’ behavior problems. I was medically discharged from the Marine Corps in 2000 and used the Montgomery G.I. Bill and vocational rehab to get my bachelors in education degree. Since, I’ve always had an uncanny gift for teaching animals and people. After graduating, I got hired by a local elementary school in Beaufort. At the end of my first year, I was eager to start my next year teaching, but it just didn’t happen. Beaufort County was rezoning their schools/district, and I did not have enough time in the system. Teachers with years of experience had first priority, and I was passed over. I had been training dogs on my own for almost 13 years at this point as side work on a part-time status. One day, while I was in PetSmart getting nutritional supplements for my Doberman Pincher “Sexy Red,” I explained to the manager I was a dog trainer. They needed a trainer and I needed a job. I trained with them for almost three years and loved every minute of it. It was during this job when I hooked up with Justine Crowell in “Operation Saving Jake.” I had made the decision to commit full-time to dog training and invest 100 percent into growing my business, as well as investing full-time in training service dogs for combat veterans. I have never looked back, and though I still miss investing in the lives of our youth, I enjoy investing in my fellow disabled US veterans.

What inspired you to train dogs for Veterans?
Funny story! I was the lead trainer at the Petsmart here in Beaufort. This Woman named Justine Crowell got hired as a second trainer. The first day I met her, I introduced myself as Natalee, and then squirted half a bottle of disappearing ink onto her brand new tan pants. Needless to say we were instant best friends! Not long after our exciting introduction, Justine came to me with this unbelievably crazy idea. She wanted to start a 501(c)(3) nonprofit that would take dogs from shelters and rescues, and train them to be service dogs for combat veterans, and she asked me if I wanted in. I am a disabled Marine, and what she was proposing was near and dear to my heart. So without a shred of doubt or hesitation in my mind, I said yes and jumped right in to “Operation Saving Jake.” Jake was a veteran who died of a heart attack during one of his PTSD episodes. 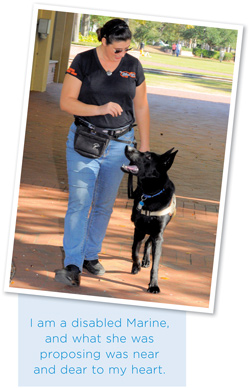 Tell us about your journey and goal with Chinook.
My journey with Chinook, a black German shepherd, is one of great joy and sorrow. I met him when he was two days old. He was donated to me by Lace Cruze, a local dog breeder, to be trained as a service dog for a combat veteran. I waited for him until he was three months old. During that time Lace was able to invest an unbelievable amount of time and energy desensitizing the entire of litter of 12 to just about every stimulus and distraction you can think of. She did such a good job, Chinook slept right through Hurricane Irma. From the time Chinook stepped foot in my red Jeep with green paw prints, he has been in a training environment. We have spent time training in almost every public venue in Beaufort, and many places in Charleston. Many of our training sessions have been at the Beaufort Naval Hospital and Ralph H. Johnson VA Medical Center. He has also been into group marriage counseling, family counseling, congregations of over 1000 people for extended periods of time (2-3 hours) and the Charleston International Airport. We’ve been practicing for an upcoming flight to Las Vegas in December. The TSA agents gave us a private tour of security so Chinook would be familiar with the metal detectors and procedures of passing through security checkpoint. We also spent a great deal of time at baggage claim and the ticket counter. He was a big hit with TSA! My goal is to have him trained as a PTSD/mobility/TBI (Traumatic brain injury) service dog at the end of 18 months of training. We have about a year left. When a suitable candidate is found for Chinook, at the end of his training, that individual will go through extensive training on how to handle and command Chinook properly, as well as how to transition to owning a service dog—not a pet. The disabled veteran who receives Chinook will then go through several months of training on a weekly basis to ensure they are both providing the best care for each other. Just like any other “medical device,” Chinook will come with an instruction manual. I still have him for another 13 months, and I already tear up when I think about giving him to someone else. I love him! But what he’s going to do for somebody else is greater than the heartache I’ll feel when he’s not with me.

How Can People Help?
Chinook and I are traveling to Las Vegas in the second week of December. We are getting an upgrade in training! Justine, the founder of "Operation Saving Jake" just completed a weeklong session with Cesar Millan, The Dog Whisperer. We can definitely use some sponsors to help us get there. Right now everything is out of pocket for Justine and me, so I’m traveling on a Ooodles of Noodles budget. Tax-deductible donations can be made directly to me or to "Operation Saving Jake." Contributions made to Chinook will only be used for Chinook. Visit our website at savingjake.org and click on donate or volunteer.

What is the most challenging thing to train a dog to do?
The truth is, the hardest thing to train is the owner. Dogs will give you what you asked for; they are programmed to please. People, however, have to make lifestyle changes in order for their dogs to have lasting changes. People ask me all the time if I’ve ever had dogs that failed. I say no, but I have had owners who were not in a position where they were mentally, physically, or financially prepared to make the changes necessary to change the behavior of their dog. It takes an entire household to train a dog.

What are you currently “ROARING” about?
I am conflicted. On one hand “Hear Me Roar” means to make my own way in this world, standing up for what I believe in, and fighting for what I want, wearing my armor into battle. I often say when dealing with a difficult situation, “I will win; I may come out full of holes, but I will still win.” On the other hand, I am watching our society disintegrate in real time. There is such a lack of respect for other people in every venue. Everybody’s coming out “full of holes!” People are rude on the road, in the checkout line at the grocery store, on TV, in the movies, at sporting events and at home. I think some people are doing a little bit too much roaring for all the wrong reasons. It is one thing to have a conviction and belief and stand by it. It is another thing to unravel the fabric of society just for the sake of battle without even knowing why. It seems these days people want to jump on any bandwagon that seems to be moving forward, and they don’t even bother to educate themselves on what they’re fighting for, or what the end goal of that fight is. I do honestly believe a true show of strength is showing self-control. Of course, it took me 40 years to figure that out. If there is anything right now I am roaring for, it would be the success of Chinook and the life he’s going to change.