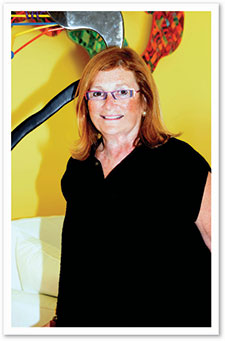 June begins hurricane season. Already, there’s a force of nature swirling across the Lowcountry stirring things up.  Her name is Myla Lerner. If you’ve entered her force field, you’ll never forget it.

She ushered me into her kitchen, in the midst of directing the landscaping crew, giving instructions to her painter and mildly scolding the contractor—responsible for renovating the house—whose workman left a back door lock broken and unsecured overnight. She’s a whirlwind whose magnetism is immediate; the people at her command appear devoted to her.

Both Myla and her house are originals that beg my attention. She is a natural storyteller, talking in a stream of anecdotes and descriptions peppered by her signature phrase, “happy as a clam.” She is simultaneously delighted by and devoted to her wide-ranging circle of friends and interests. She is short in stature and larger than life. She is wearing a funky Lucite bracelet that complements the Lucite barstools in her kitchen. They suggest a transparency that extends through much of Myla’s life.

Her living room walls are “hot yellow” and the backs of the bookshelves are bright purple.  She said, “When I told Carlos [her painter] what I wanted, he just looked at me and said, ‘do you know where you live?’” Couple the intense colors with her eclectic and ultra non-duplicable art collection and one begins to realize how unique Myla is.

Born in Akron, Ohio and educated at Syracuse University, Myla worked in Washington DC after graduation before moving to San Francisco. There she reconnected with a former male friend from Syracuse, who was then editor of the San Francisco Examiner. That friend, who she calls Kramer, is now her husband of 36 years and publisher of USA Today. They married and moved to the idyllic Northern California town of Tiburon and raised their son and daughter.

“It was the most perfect community to raise children. Plus it was easy to be involved in the community.” She started a business that specialized in major event planning. One California client asked her to re-create Central Park for a “Black and White Ball”, where Tony Bennett was performing. Myla had the creativity, the guts and a $180,000 budget (decades ago) to make it happen. She’s the prototype for the “can do” woman.

The phone rings and, after a brief interruption, Myla returned laughing and said, “You know, I’d never even been to South Carolina. I’d rarely even thought about South Carolina. No one could’ve convinced me I’d actually live here someday.” In 2014, Myla and Kramer were invited to the opening of the Hilton Head Zipline. Myla’s close college friend and sorority sister, Pamela Freedman, is co-owner of Zipline Hilton Head.

“We met some wonderful people here during that visit.”

Several weeks after the opening, through a confluence of chance and connections, Myla was back in Hilton Head looking at a house that was for sale. She recalls, “I liked the bones of the house. It was close to the beach, but not on the beach, which I also liked.  When I saw my first alligator by the lagoon I thought, ‘we’re not in Kansas anymore.’ Then I bought it.”

While raising her children and before she moved to Hilton Head, Myla led a life that will one day thrill her biographer. Included among the highlights, is her career as a successful Broadway producer. Her first play was the wildly successful 2011 remake of Hair. Her credits include the critically acclaimed Finian’s Rainbow, Pippin and The Heidi Chronicles, among other productions. Myla acknowledges, “I’m a wonderful fund-raiser and marketer. It’s what I’ve always been good at.”

That skill greatly benefited Hilton Head’s newest theater group, the Lean Ensemble Theater, when she joined their board this year. Myla enthused, “There is so much talent on this Island. There’s no limit to the things I’m discovering and want to be involved with.”

So far she’s invested her time and talent in the Art League, The World Affairs Council, SCAD and The Boys and Girls Club. She was in town for the Women in Philanthropy annual luncheon and she is interested in promoting the Hilton Head Symphony, The Jazz Corner and CODA (Coalition Against Domestic Abuse).

“I’m very happy to be here and I’m optimistic about what can happen here. I’m building a network of friends and I’m meeting women who make things happen. I’m firmly dedicated to women promoting women.” The phone rings and Myla jumps up, insisting, “I only care if it’s Kramer.”