The Heart and Soul of the Funeral Industry 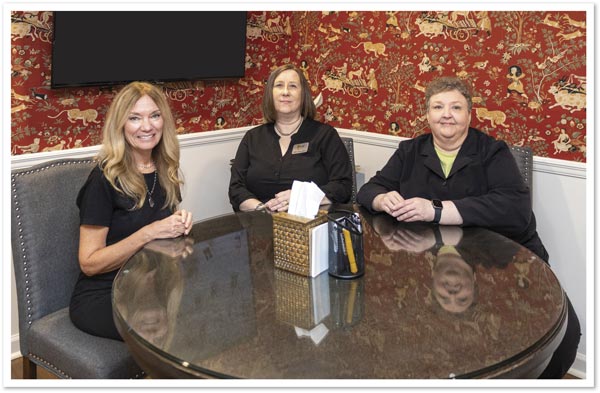 Missy Brown, Valerie Mayer and Lesley Babington have each found their niche at Island Funeral Home in a previously male-dominated industry. Missy and Valerie are funeral directors and Lesley is the director of the crematorium. For each of them it’s not a job, a career, or even a vocation…it’s a calling.

Times have changed from when Valerie went to mortuary school in Syracuse, NY, in 1982, when there were only four women in a class of 25.

Valerie said she felt her work was a calling, like being called to the clergy. She was always interested in death, even as a little girl. “We are here to help people through the worst time of their lives,” she said. “We take people under our wing with care and compassion.” In her first job as a funeral director, she and her husband lived on the third floor of a funeral home. She said it was never weird or spooky, and it had the advantage of being able to walk downstairs to go to work—no commute! Valerie has five children and one grandchild (with another on the way), and feels that her children are very proud of the work she does. 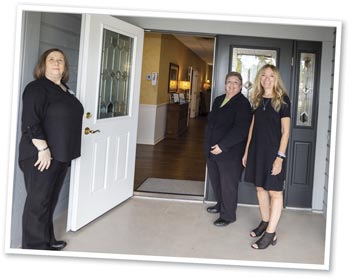 Missy was inspired to become a funeral director after the death of her grandfather. “Seeing how our family was cared for, how our questions were answered, and how we were guided through the process with such care and compassion inspired me. I was working as a respiratory therapist at the time, but I never felt that it was my passion,” Missy explained. So she completed her training and internship in Virginia, and in 1999 she began her life’s work guiding people through their most difficult times when they don’t know what to do or where to begin. As a child, Missy never wanted to go to a funeral. Her mother says her new vocation is a “morbid curiosity,” but Missy recognizes the importance of her job. “My voice is soft, and I have the ability to put people at ease,” she said. “This is the first time for many families, so we don’t treat it like a business meeting. We guide them, anticipate their questions and care for them with attention to detail.” Missy grew up on a dairy farm, and this down-to-earth upbringing has served her well in connecting and caring for families.

Lesley was born in Scotland, and in her youth she was fascinated by the funerals in the United Kingdom. “I wanted to be in the business, but in Scotland it was too male-dominated,” she said. Perhaps some of her inspiration came from frequent phone calls to her family’s home. Their phone number was only one digit off from the number for the local funeral home, so there were lots of interesting wrong-number calls. “The funerals in Scotland were very formal, and everyone wore black. The funeral directors and staff wore black suits and top coats, as well as top hats. They walked ahead of the hearse in the procession,” Lesley explained.

Lesley and her husband took advantage of a job opportunity and moved to America, first to Seattle, then to Fort Worth, TX, and finally to Hilton Head Island eleven years ago. She has been the director of the crematorium for four years. “It’s important to put yourself in their shoes. I also do the transfers from the home or hospital. When someone dies suddenly, it’s the hardest. I can tell when someone needs a hug, and I show them that I care. I tell them, ‘I will have your loved one in my care until I return him to you.’ Sometimes my accent takes their mind off the situation for a minute,” she added. “My husband asks me when I’ll retire, and I say, ‘I have to retire?’ I want to do my job ‘til I die.” Lesley has two children, and her 18-year-old daughter works with her part-time doing data entry.

These three angels of mercy work together as a team in service to their clients. They rotate taking lead roles, but assist each other to ensure families receive the best personalized service with care and compassion. As Valerie commented, “Most people search their whole lives for a job they love. I feel so lucky.” Missy and Lesley feel
the same way.