Extraordinary Adventures All Over the World 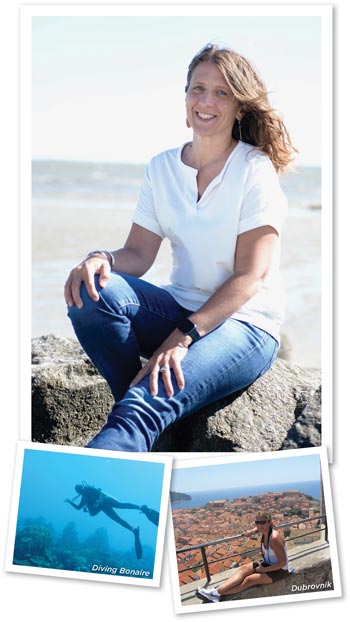 Diving with manta rays in Fiji. Scaling glaciers in New Zealand. Crewing tall sailing ships around the Caribbean. Skiing in British Columbia or exploring the back alleys of Dubrovnik. From Hawaii to Hungary, Montenegro to Micronesia—Marija Bumgarner has acquired an impressive travel register. Exploration for her is no mere phase, but a lifelong love that she keeps alive and shares with others.

“I was always the curious kid wanting to run off and learn new things,” says Marija, who was born in New York but relocated with her family to Croatia at age 9. “I was just always wanting to GO.”

Although they returned to the U.S. when she was 16, those early experiences abroad—as well as the multicultural mashup surrounding her in New York—inspired Marija to absorb all she could of our planet and its many wonders. She planned her college semesters in advance to maximize study abroad; she did a semester at sea, spent time in Australia, Costa Rica and Fiji, then completed an internship in Croatia. Her goal at the time was to become a dolphin trainer, but after majoring in psychology and animal behavior, a specific experience caused her to shift tracks.

It had always been on her bucket-list to dive the Great Barrier Reef. But when the day came she was taken to a part of the reef that was dead, just a barren mass of crumbly white rubble. “I want to travel,” she recalls thinking. “I don’t want to stop traveling. But seeing the negative effects made me want to learn more about melding conservation and travel.”

This led to her getting a masters in sustainable tourism, then taking a job with the National Oceanic and Atmospheric Administration (NOAA), which sent her to the U.S. Virgin Islands for two years to develop marketing and tourism plans. While there she met her husband, a boat captain from Charlotte, NC. They moved to Charleston, then Savannah, and eventually Bluffton where they started a family. Somewhere along the way, Marija found that her work had become just a job; but after the birth of her first daughter, she saw the joy with which little Olivia explored the world and realized she wanted to find that same feeling again in herself. She wanted to follow her passions and help others do the same. So in 2019 she started Extraordinary Moments Travel, a boutique company that designs adventures way beyond the ordinary with no detail overlooked, curating experiences for people to feel alive again, while at the same time benefiting communities they visit.

“Conservation means sustaining the environment so that we can visit again,” she says, “but also so that it can continue to feed the locals, fishing or whatever they’re doing, and benefit their economy. And it means preserving the culture so that people can pass down their heritage, instead of sending kids off to the big city because there’s no economy in the town they’re living in.”

She cites the example of Africa, where tourists who come to see lions, elephants and giraffes spend money that goes back into protecting wildlife. On the other hand, a barren economy only supports poaching.

“Wherever you go, people are trying to do good,” she affirms. “Oftentimes it’s just a question of education. It’s knowing who to use—the right suppliers, partners and operators who take the initiative to maintain their equipment, train their guides, hire local and buy local rather than importing. We want to make a positive impact.”

Up Close:
Married to: Captain Brad Bumgarner, owner of Salt Marsh Sailing on HHI
Daughters: 4-year-old Olivia and 2-year-old Leilani
Hobbies: paddleboarding, boating, running, anything outside
One thing she always has with her, whether traveling or not: a light sweater or shawl
Next on her list: Africa, especially Mozambique and diving with great whites in South Africa
For more info: www.extraordinarymomentstravel.com