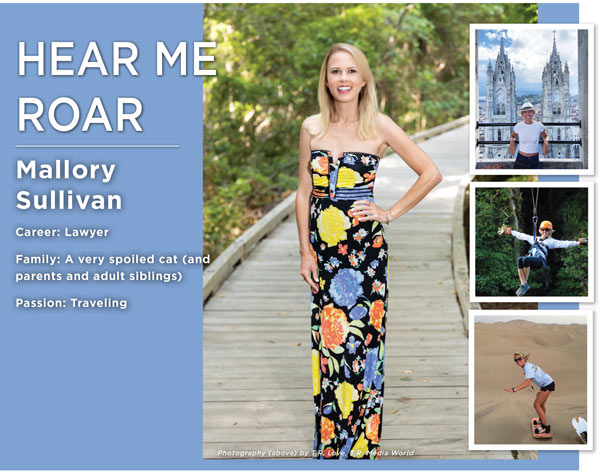 Your life has been one adventure after the other—51 countries, Scuba Divemaster, up for all adventures! What are the top 3 most exhilarating things you’ve ever done?

1) Trekking to Mt. Everest Base Camp (17,598 feet elevation). After flying into one of the most dangerous airports in the world (precariously perched on the side of the mountain, notoriously short runway and frequently blanketed in fog), it takes eight days to ascend to base camp, and four days to hike back down. There are no roads, much less cars, and everything--gear, food, drinking water, etc.—is carried by either you or your sherpa, or, if you’re lucky, by a mule or dzo at the “lower” altitudes, or a yak as you gain elevation. Despite it being a week since you have showered and the increasing cold, the excitement is palpable as you reach base camp.

2) Bungee jumping. I did the highest jump in Central America at 469 feet. With tandem skydiving, which is also an incredible rush, the instructor does the jumping, but when bungee jumping, you have to convince yourself that it makes sense to leap, headfirst—that is hard to talk yourself into! A few seconds into your fall, once you realize you are still alive, it’s exhilarating.

3) Rock climbing/deep water soloing near Cát Bà Island in Halong Bay, Vietnam. The bay is dotted with limestone karsts (tall rock formations that protrude out of the water with vertical sides). Some have small beaches, so you rock climb more traditionally with ropes in place; others directly rise out of the water, so you free climb up, and then jump down (if you don’t slip first). It’s challenging but rewarding.

What is something you would never do? 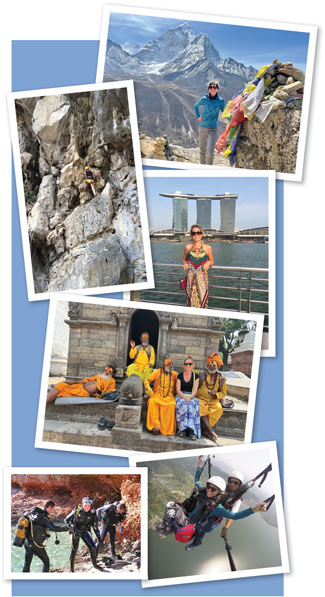 I’ve been thinking, and I can’t come up with anything that I wouldn’t try once! Not sure if that’s a good thing or not.

What, where or when do you think your intense wanderlust was sparked?
I’ve always been an avid reader, and I fell in love with the way a good story could transport you anywhere; I think that set the stage early for a life of travel. What cemented it, though, was one of my earliest trips to visit my aunt and uncle on the west coast. I was maybe 8 years old, and my parents put me on the plane solo. Just before my flight home was supposed to land, I called my parents to let them know I wouldn’t be back in time for school the following morning. They asked if my flight had been delayed or cancelled, and my response was “Maybe, I’m not sure, we’re in Mexico. I’ll let you know when I’m coming home.” It is definitely fair to say they had to get used to my independent streak from a very early age!

Do your parents/family/friends think you’re crazy?
I got a resounding “yes!” from one coworker when I asked her this question, and sometimes my dad just shakes his head when I tell him what is next. But, when I asked my mom, she said: “No, you’re absolutely amazing. I never thought I’d have a child who has had the opportunities you’ve had, and I’d have never been brave enough to try many of the things you’ve done.” Overall, everyone is incredibly supportive of my need to explore the world more fully, and I love that I always have my Hilton Head family and friends to come home to when I’m ready to regroup.

Tell us the Top 3 most magnificent things/views/nature/animals/etc. you have seen.
1) The views in Iceland, literally all of them—from active volcanoes and natural hot springs to erupting geysers and glacier-strewn black sand beaches—are incredible.

2) I don’t even know where to start with the wildlife in Galapagos—giant tortoises, blue footed boobies, marine iguanas, penguins--and that’s just above water. Diving was a whole other world--schools of hammerheads, humongous rays, sea lions that played with your bubbles, mating sea turtles—it was magical underwater.

3) Sometimes I like a break from adventure to simply sip rosé, eat gelato, and enjoy life, and Portofino, Italy, is one of the most picturesque, quaint and colorful places to do that.

Have you had a time when you experienced fear?
I’ve been frustrated or annoyed or inconvenienced when traveling, but never in a situation where I didn’t think I could handle it. I’ve been some places that aren’t necessarily regarded as “friendly” to solo females like Turkey and Morocco

You have accomplished so much at such a young age. What’s next?
In terms of travel/adventure bucket list, it is literally every single country I haven’t visited yet--and honestly, additional trips back to all those I already have!  Seeing the northern lights is pretty high up there, as is an African safari and swimming or diving with whale sharks. Outside of travel, I’d like to get my pilot’s license. Professionally, I want to find a way to incorporate more pro bono work into my career, and eventually, my goal is to combine my passion of travel and volunteerism to found a program for lawyers to use their skills in volunteer capacities abroad, whether to preserve culturally and historically significant sites, advance human rights, or increase protection for wildlife.

You have a soft-spot for animals. Tell us more.
I’ve never met an animal I didn’t instantly love! I convinced my parents to let me adopt my first kitten at age 3. In college, I began fostering cats, which expanded into bottle feeding kittens, and now includes fostering both cats and dogs, as well as helping with flights from the Bahamas that bring over puppies from overflowing island shelters to find their new homes. I also started volunteering with injured animals/handling medical cases. When traveling, I keep pet treats in my purse so I can feed hungry cats and dogs that I encounter. One of my favorite experiences was volunteering at the Costa Rica Animal Rescue Center. The animals at the Center ran the gamut from sloths, monkeys, kinkajou, porcupines, and coatis to deer and raccoons. Being able to work with wildlife was rewarding.

If a gap year (between high school and college) was mandatory for American students, and money was not an issue, what should they be required to do?
Like Mark Twain said, “Travel is fatal to prejudice, bigotry and narrow-mindedness[.]” I cannot think of a better way for young adults to learn that there is a bigger world out there and gain confidence in themselves than by having the opportunity to travel.

What are two impactful life lessons you’ve learned throughout your adventures?
1) As trite as it sounds, I’ve learned a smile is universal. I’ve always been amazed at how kind and helpful most people I’ve encountered in my travels have been.

2) Experiences are more important than things. I’ve never regretted sandboarding in Peru, mountain biking down a glacier-capped volcano in Ecuador, visiting wineries in Chile, kissing the Blarney Stone in Ireland, dancing in streets in Brazil for Carnival, downing giant mugs of beer at Oktoberfest in Munich, diving with sharks in the Bahamas, eating crepes in Paris, or spending weeks surfing in Nicaragua. Those memories last a lot longer than a new outfit! Travel reshapes your priorities and reminds you there is more to life.

What are you currently roaring about…
1) It is possible to take time off and not derail your career trajectory! It is so ingrained in our culture to get into the best schools, have summer internships that are relevant to your career, go straight from college/graduate school to the professional world, and then work diligently towards promotions/making partner/etc. We are led to believe that taking time off for any reason is detrimental to our career, and any gap on your resume is a red flag. When I left my position at a law firm in New York City to travel and work on yachts, I bought into this myth, and was nervous about being able to “get back in” with a law firm, but it was completely unfounded. I had a major client track me down during my time off and recommend me to multiple firms that handle their business, so I was getting calls to interview for jobs before I was ready to return to practicing law.  Every firm I interviewed with found my hiatus fascinating and wanted to discuss my adventures.

2) Before engaging in any animal-related tourism do your research, pay a little more to visit a true rescue, or forego an experience rather than inadvertently help finance an industry that trades on cruelty. When I visited Thailand, I wanted to ride an elephant, but I did research first. It turns out baby elephants are prematurely ripped from their mothers and tortured in order to train them. Even the older/rescue ones with the baskets on their backs suffer diminished spinal health. Riding an elephant is something I can never do in good conscience, but it was just as amazing to visit a sanctuary and splash in the water near an elephant instead. There is almost always an acceptable alternative.