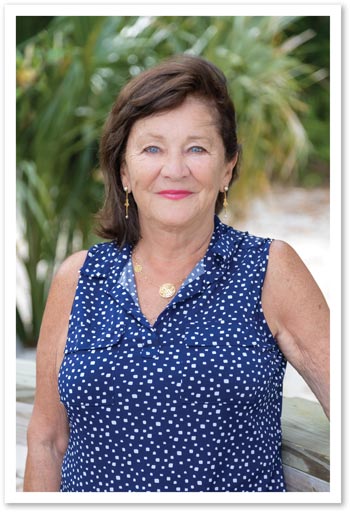 “When I saw the break of day, I wished that I could fly away instead of kneeling in the sand, catching tear-drops in my hand” —Nora Jones

WANDERLUST! You’ve all heard the word and perhaps wondered what it really means, but those with wanderlust don’t necessarily need to go anywhere in particular, they just don’t care to stay in one spot.

For Lucia Franklin Chastain, her wanderlust started out as a trip for reflection. She never considered herself an overly adventurous person, and those who grew up with her would describe her as a creative—a kind, hard-working, caring friend—but it’s not until you hear her whole story that you know Lucia is a brave ADVENTURER!

Epic trips are not only made of towering mountains or grueling treks, you can have an epic trip in your home country, as you embark on a quest to recapture your sense of wonder about the world. At least that’s what Lucia did when she bought her 25-foot Class-C Gulf Stream motor home with two slides in 2005. She decided that a little bit of travel might be good for her soul.
But let’s back up a bit and map out her life story to see how she got to this journey traveling across the US:

Lucia was born in St. Joseph, Missouri, the third child of six, and took her first big adventure in 1963 at the age of 15 when she moved to Decker, Montana, (population 7) to be a nanny on a cattle ranch. She literally packed her bags, jumped on the private plane and found herself working all summer watching kids, riding horses, getting her driver’s license and living life big! Three summers later, she found herself on Mackinac Island in Michigan working at the Grand Hotel and rooming with college kids from across the country. It was safe to say she wouldn’t be sticking around St. Joe, Mo., for too much longer.

The following year in 1967 she met Gary in May, and by July, they were engaged, and by September they were married. And the true adventures began! Lucia’s face lights up as she remembers the “36-year adventure” she had with her beloved. They moved from Nashville back to St. Joe for a year, to Chattanooga, to Signal Mountain, TN, to Southern Pines, NC, and along the way they had four amazing children. But as we all know, when man plans, God laughs, so there were some heartbreaks along the way. When Lucia was 7-months pregnant with Jeni, her second daughter, her 2-year-old daughter, Tralou, was fatally hit by a car. Lucia said her life was a blur during this time, and she’s not sure if she ever really gave herself time to grieve properly. After Jeni arrived, Becki joined the family and several years later, Gary and

Lucia had their son, Chad. Lucia was the epitome of the best mom ever, staying home to raise the kids. However, she is one of those people who can never sit still, so she started a company in 1978, Specialty Brokers, where she was a builder/contractor. She literally rebuilt houses from the ground up! From floors, faucets, electrical, blinds, wallpaper, you name it, she was the connector that made things happen! When the mayor came to their house in Signal Mountain to thank them for renovating the neighborhood, she knew she had found her calling!
When Gary was 46 he had his first heart attack. Life continued but they changed some habits and prayed he would be ok. Eight years later he had a second heart attack that disabled him. Lucia took care of him for the next five years, and found herself grieving yet again in 2003 when Gary lost his battle at the age of 60. She was 55 years old and devastated. One daughter moved in for a bit and then her son, and Lucia began to realize she had never been alone in her entire life. During this time she experienced a few other overwhelming losses that took a toll on her. She was always such a strong woman, but she was beginning to feel exhausted.
In 2004 she took a much needed three-week long girls’ trip to California. She explored San Francisco and drove down the coast to San Diego. Perhaps this adventure is what sealed the deal and brought her wanderlust back to life!

The following year, on September 30, which also happened to be her 58th birthday, she bought the motor home, sold her house, packed her bags, and she and her dachshund, Keily, hit the road.

Five years later she was still on the road! The adventures she had were plentiful. From unknowingly driving Dragon’s Tail in NC, to heading down to Louisiana to help after Hurricane Katrina, to sticking to the Blue Highways visiting friends, friends’ of friends and meeting new friends as she drove from coast to coast not once, not twice, but four times!

Perhaps the most fun was each summer when her grandchildren came to visit what came to be known as “Camp Nana,” where they would explore new campsites in new states and pack the motor home with love, excitement, and joyful laughter. These moments bonded Lucia with her grandkids on a level that she is beyond thankful for.

She also told me the story about naming her RV and how it came to her on an Easter Sunday. As she opened the Sunday morning paper, she saw an article titled “State of Grace,” and she knew that had to be the name of her RV! She painted it on the back tire cover and it was perfect. Everyone always asked her what state she was in now, and in all honestly, this trip put her in a constant “state of grace.”

On average Lucia drove about 300 miles a day with a few days of rest in-between as she settled into a new spot. Overall, she put 60,000 miles on her RV. But upon reflection, this adventure was truly a cathartic journey of the heart. Since this was the first time Lucia had been alone, she found solace and peace. The day she started driving she cried for four hours. She broke down and let the years of sheltered grief come flooding out and she began to heal. Music became her companion, and the lyrics to her favorite songs became her healing tools. These songs defined periods of her journey through life, and she would find herself singing passionately, only to cry out her tucked away feelings. This RV excursion, this music and this alone time became her road to healing, happiness and wholeness.

Lucia’s cross-country journey came to a happy ending in 2010 when she met Don Wilson, the man she now calls husband! She and Don have had exciting adventures of their own, moving from Murfreesboro, TN, to Chattanooga, and retiring to Hilton Head in 2018.

Life often truly comes full circle. Wanderlust pulled Lucia to take this time for herself to heal. Her experience teaches us all to take a risk, live life big, be brave and don’t be afraid to be alone! As Lucia was traveling, she started a journal entitled “My Play List,” and of course, it’s safe to say that the music plays on!