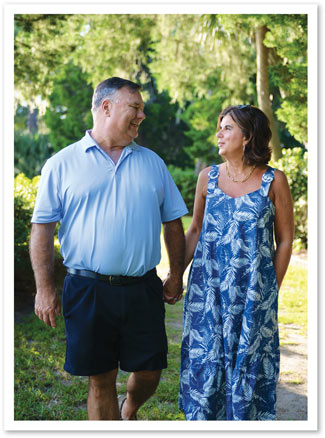 Lori and Scott Martin are still married after 37 years. They’ve always gotten along and have never even thought of divorce. However, it was that “’til death do you part” thing that almost got them…twice.

“I love Scott so much,” Lori said through tears, though she also said laughing, “but sometimes I want to kill him. He says ‘right back at ya!’”

This longtime couple have been through thick and thin. They have raised three wonderful children to adulthood, with the oldest two now married and settled. The youngest, Anni, at age 23, is back living at home studying to be a nurse. She will graduate after next year’s spring semester, and it is by the grace of God that she had moved back home last year when this family’s world was turned upside down.

In fact, this whole story is about the grace of God, and how He put every piece and part in perfect order to keep the Martin family whole. “We had people praying for us all over the world. Africa. Italy. Spain. All over America. I can’t tell you how much every single prayer and every single thing everyone did for us meant—from meals to cards, to calls, to emotional support. We couldn’t have made it without it,” Lori stressed.

What couldn’t they have made it through? Scott’s battle with Covid-19. Both Lori and Scott came down with Covid—Lori on July 30, 2021 and Scott on August 2, 2021. “They both were sick, but I thought Mom was sicker. Dad kept getting up, cooking something to eat. He would feel bad and then say he felt better. Mom just stayed in bed and slept. She looked awful—very pale,” Anni said. However, eight days later, on August 10, it was Scott who was taken to the hospital.

“He came in and said his oxygen was down to 73 and told me he felt terrible,” Lori said. When Anni heard of her dad’s O2 levels, she grabbed the keys and demanded he go to the hospital. Living in Bluffton, their home is about the same distance from Hilton Head Regional as Coastal Carolina. Scott said, “Go to Hilton Head.” That was God’s first wink.

Upon arriving at the hospital, Scott had to enter alone, as this was in the midst of the full blown pandemic. He didn’t mind because he knew he would be home in a day or two. But things didn’t go as planned. After two days in the hospital, Scott went on a ventilator and stayed there for the next 42 days—70 days in all. His chances of survival were dismal and worsened every day. He coded one day, and unfortunately, Anni, whose nurse’s training is at the hospital, walked into the room. The nurse calmly and kindly asked Anni to step out of the room, as she and the doctors brought Scott back to life.

However, the next God wink showed up in the form of two pulmonary specialists, both of whom retired from prominent hospitals that we all consider to be the best. The two had not worked together before, but became somewhat of a team after retiring to the Lowcountry and landing at Hilton Head Regional during the pandemic. These are the professional, experienced hands that Scott’s life became cradled by.
Working in two-week rotations, each doctor would update Lori on a daily basis. In the beginning, and actually for a while, the news was grim. “I prayed, and I was at peace. I couldn’t bear the thought of Scott leaving us, but I know God has a time for us all. He has the right to take us at His perfect time. I knew the children and I would be alright, even though I didn’t know what that would look like,” Lori said.

A call came in one day, and the doctor told Lori that Scott needed to have a tracheotomy to survive. He was not able to expel what needed to come out of his lungs. But he explained it would probably be at least 10 days before the procedure could be done because Scott was too weak to survive the procedure. Lori point blank asked if Scott was going to live.

During the time Scott was hospitalized, Lori personally knew, or knew of, nine other men who didn’t make their Covid fight. She explained how she got through each day: “I would wake up and tell myself I have to make it ’til noon. Once noon hit, I would will myself to stay calm until 3. Then I would make it until 6 for supper. I was still sick, but I was most concerned for Scott and the children. I didn’t want to sit and worry. I knew without a doubt that none of this was in my control. It was all up to God. So I just took it about three hours at a time. Once supper was over, I made it to bedtime. Every night at bedtime, I asked God to hold all the fear, worries and anxiety and allow me to sleep. He did.”

About that question Lori asked the doctor: “Scott can live, but I don’t know if he will.” That is all he could give her.

The next morning, the phone rang. It was the hospital calling to get permission to perform the tracheotomy. Lori lost it. “No, you can’t do that. He’s not strong enough. The doctor said it would be 10 days!” The nurse got the doctor on the phone: “Lori, Scott was a different man when I came in this morning. I couldn’t believe it. He is ready.” This was yet another wink from God.

What I haven’t told you yet is what this family experienced a few years prior. Lori was diagnosed with breast cancer, right after her sister and her brother-in-law had died from cancer. This is not the first life or death situation the Martins have faced. Things were looking up for Scott, but he was not out of the woods.

As Lori’s tears fell throughout our entire time together, it wasn’t until Lori told me about all her children coming home that my tears began to flow, too. Lori explained that she would feebly go sit in a chair on the patio in the backyard. The girls, Kate and Anni, would sit beside her because Anni had been exposed, and Kate had already had it, but Alex would sit in the grass in the middle of the yard and talk with his mom and sisters from there. This image is heart wrenching to think how close Alex, just a young man in his 20s, came to having to step up as the man of the family, and how worried he was for his dad, mom and sisters.

The best news ever is Scott survived and life has returned to a new normal for the Martins. Now, almost a year later, Scott still has ramifications from his long, treacherous bout with Covid, but every day is better than the one before. Alex has gotten married since then, and the family is closer than ever, especially Lori and Scott. They both know that faith—and a series of very fortunate God winks—got them through and kept them whole.