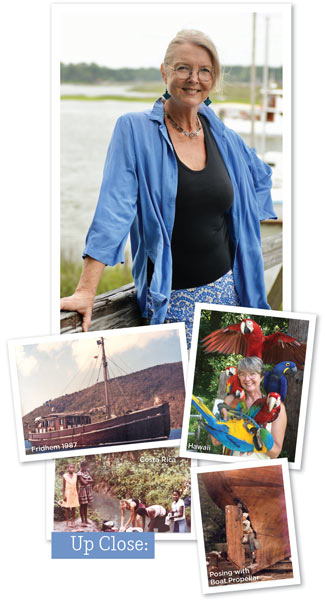 “If you want to have an adventure, I can give you the three key words,” says Lillian Heyward, who lives in Bluffton but spends winters cruising the Caribbean and summers cooling off in Nova Scotia or the mountains of Virginia. “‘Sure, why not?’ Just say those words when someone asks you to do something that others think is insane.”

Lillian grew up an Army brat; her earliest memories are of Hawaii, and by age 10 she was living in Turkey. While attending art school in Maine, she took a job on a Swedish ferry line that ran back and forth to Nova Scotia and ended up falling in love with one of its officers. They married and lived in Sweden for two years, using her art training to work for sign companies. Then they bought a 1932 North Sea Trawler named Fridhem (“peace home” in Swedish) and left to sail around the world: through Europe to the Canaries, across the Atlantic to Barbados, up the Caribbean to Savannah, where they started running out of money, and at last to Hilton Head, where they got jobs as strikers on shrimp boats. It was grueling, but the money Lillian made was enough to open her own sign company at age 27.

Then, an artist chartered the Fridhem for his project to drop 32 granite blocks at specific coordinates all across the Atlantic. The vision? “That was hard to pin down,” Lillian says. “If there was a nuclear holocaust all the art would be lost except his because it would be in the primordial ooze. It was very cool...and narcissistic.” At one point they found themselves in huge swells 100 feet high, which weren’t dangerous but made them queasy. “You’d come up to the top of the ‘mountain’ and see all the other ‘hills’, and it was all just open ocean,” Lillian recalls. On a different Atlantic crossing in the Fridhem, it was so rough they almost went down; Lillian was nauseous and terrified until the moment she thought for sure they were going to die—then suddenly all that disappeared and she felt an incredible peace come over her.

It was a dark year when she divorced, her sign shop burned under mysterious circumstances, and her sister committed suicide. But when Lillian resurfaced it was in the movie business as a sign writer and later a graphic designer. The work suited her. One year she went to Burning Man—a legendary art event held annually in the scorching Nevada desert—and decided she wanted to build a project of her own. She considered what she’d want to bring to the world and landed on a spot in the Abacos Islands called “The Signing Tree,” where travelers carve or paint their names on bits of flotsam and jetsam and drape them over the branches.

Three years later, Lillian created “The Island of Lost Buoys,” an installation made mostly of recycled materials that featured a hammock, treehouse, Burning Man pirate flag, and of course the Signing Tree. The project was a success, but after traveling to the Bahamas in the wake of devastating Hurricane Dorian, Lillian began hatching a new plan. “When a 22-foot wall of water hit Big Abaco, 3,000 Haitian immigrants in low-lying areas went missing,” she says. “So my next idea would be to take the Island of Lost Buoys—my favorite place in the world—and build a huge wave cresting over it that contains all the flotsam and jetsam of people’s lives. I want to bring recognition to climate change and the impact it’s having on our favorite places in the world, including here.”

For now at least, Lillian is safe enough on her porch overlooking the May River, in the historic family home of her husband George Heyward. They have a fleet of funky little boats, and a constant parade of crazy characters and old salts drifting in and out so that every day is an adventure. “I’ve lived a charmed life,” Lillian says. “I’ve had tragedy and disaster, but it always led to something better. People think we’re crazy because we live in this old house without central heat and air, and we run down to the Bahamas in little boats, but man, I wish everybody could do this.”

Why she fell in love with George: “Because he was the buzzard on the garbage truck in the Bluffton Christmas Parade. I don’t do boring very well.”

Her favorite piece on the Signing Tree:
A toilet seat with a name spelled out in sea glass.

Highlight of Burning Man: Seeing a young woman lying in the Island of Lost Buoys hammock with her sketchbook.