Queen for a Year 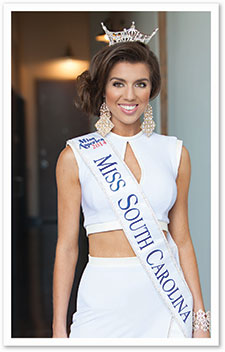 A strikingly beautiful young woman walked alone into the lobby of the Sonesta Resort on Hilton Head Island.  She may or may not have noticed heads turning—it’s simply a fact of her life. She carried a curious looking tortoise shell box with a handle—neither a purse nor a briefcase. Later she explained, “It’s the carrying case for my crown and I’m officially required to take it wherever I go. I knew if I came down the elevator from my room and walked into the lobby actually wearing my crown, I’d never get to our interview because people would’ve continually asked to take their pictures with me.”

This is Lanie Hudson’s public life, since June 28, 2014, when she became Miss South Carolina. “I’m not sure people realize being queen means you take off the year—from work or school—because it’s considered a full-time job. I have a business manager who handles all my bookings.  The weekends fill up first and I don’t have much down time. But, I assure you, it’s a commitment I was very happy to make,” she confessed with a smile.

Lanie is a South Carolina girl through and through. She was born and raised in Spartanburg and followed family tradition by graduating from Clemson University, where her father and grandfather played football. Even before her “year of fame,” both her hometown and alma mater gladly claimed her. Now she has celebrity status.

A quick Google search offers hundreds of articles and photos of the beautiful, public Lanie. In person she is poised, personable and passionate about the platform she has promoted throughout her tenure—The Gift of Life. She is an ambassador for organ and tissue donation, inspired after a close friend was killed in a car accident in 2007, whose family chose to donate her organs to people whose lives depended on this “gift of life.”

Lanie has worked for seven years to promote organ donor awareness across South Carolina. When she began, only 20 percent of South Carolina residents were registered donors. Through her efforts, and in combination with initiatives by Governor Nikki Haley and the SC Department of Motor Vehicles, the number has dramatically increased to 40 percent.

Lanie also advocates for the mission of the Miss America and state affiliated pageants. “It’s not just about beautiful girls up on a stage. The Miss South Carolina and Miss South Carolina Teen are part of the Miss America Scholarship Organization, which is the largest provider of scholarship money to young women in the world. It makes more than 24 million dollars available every year. Through my award money, I will have $38,000 at the end of my tenure, to go back and get my masters degree in marketing. The organization’s goal is to empower women to become their personal and professional best in four separate areas: style; service; scholarship and success.

Lanie is no stranger to success. Since the age of five, she has been performing on stage as a dancer. She was introduced to clogging—which she describes as a combination of Irish dancing and tap dancing—and fell in love with the energy, movement and music. For years she performed competitively and won contests across the region. When she clogged for the talent portion of the Miss South Carolina pageant, the audience was electrified.

She talks about her “small taste of celebrity” with equanimity and humor. “You have to learn how to work with all sorts of people. It’s a matter of being adaptable and manageable…and most people have really been wonderful.” She is grateful for her sponsors and the contacts she has made.  “These are valuable connections that will benefit me throughout my life. I feel really honored and fortunate.”

Lanie was in Hilton Head to address the Women’s Association of Hilton Head Island (WAHHI) as the keynote speaker for their luncheon in April. Besides being beautiful to look at and fun to talk to, she is an inspiring public speaker. Crown on or crown off, Lanie Hudson is everything “fit for a queen.” 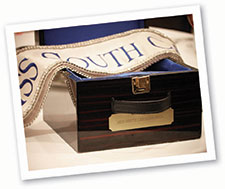 Family Support:  Mom, Dad, younger brother and younger sister (who may follow in her big sister’s footsteps) are her biggest fans. Dad loves re-watching her win the pageant; “Do you think the results are gonna change?”

Trendsetting 2-piece Pageant Gown: Gregory Ellenburg (Greenville S.C.) designed it for me and I loved the leather trim.