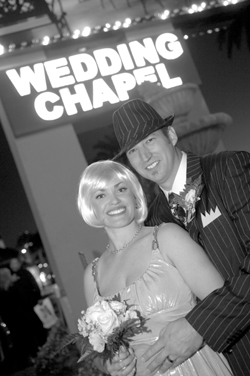 Any woman who's ever planned a big wedding knows how much work it can be. Kerrie Bradford didn't really feel like going through all that, so she and her intended, James Bradford, decided they'd just skip town instead. Their union was about as run-away-to-Vegas as you can get, Elvis and all.

"Neither of us wanted to do a traditional 'pretty' wedding," said Kerrie. "We love Vegas and the idea of a cheesy Elvis wedding appealed to us. It sounded like fun and it suited our personalities."

Kerrie found the Viva Las Vegas Wedding Chapel online, and she and James checked out the variety of off-the-wall wedding packages, finally settling on the Pink Cadillac wedding. The scenario went like this: James and Kerrie riding up the aisle in a Pink Cadillac driven by Elvis, who sings, preaches and delivers the vows with a few trademark hip gyrations while the happy couple just laugh and say I do.

"We're not even Elvis fans," admits Kerrie. "But the Chapel does everything, photo, flowers and all that. You write one check and there's no other planning."

She was surprised at the number of people who showed up-around 35 friends and relatives who probably saw the occasion as a perfect chance to sneak in a little vacation after wishing the bride and groom good luck in life. Every guest became part of the wedding ceremony, and so they had about 15 bridesmaids and 15 best men, all of whom got to shake their hips during the preacher's melodious sermon.

"The ceremony itself was hysterical," said Kerri. "Elvis sang three cheesy songs and we were all up there dancing and having a good time."

The wedding was followed by an informal reception, complete with a cake shaped like a slot machine. Then everybody split ways and enjoyed Vegas according to their own tastes. Kerrie and James, however, decided that another little escape was in order for their honeymoon.

"We kind of wanted to get out of the Vegas shuffle after all of that, so we drove to Utah and did some hiking in Zion National Park," she said. "The landscapes we saw there were all so breathtaking. The rock formations-how massive it all was. I don't really know the words to describe it. And pictures just never really capture it; you have to see it for yourself."

She and James, who is well known around the island as the Bike Doctor, both enjoy getting outdoors and experiencing nature. They met about seven years ago, when Kerrie first came to the island, but they didn't really become good friends until the summer of 2006.

"We saw each other at a concert and that was it. We fell in love," said Kerrie, who is always a little surprised to hear herself talking about James this way. "I never believed in any of the mumbo-jumbo love crap before, but it really was how people tell it: solid, easy and no doubts in my mind. But it's funny because I never thought I'd be so mushy."

Well, at least there was nothing mushy about their wedding.

"We always joke about going back and doing it all over again, just for the hell of it," she says, then laughs. "But right now we're still trying to pay off our debts from all the entertainment and gambling we did."

Born: England Grew up: Lynchburg, VA Fondest childhood memory: rollerskating Profession: Owner of BullzEye Graphics Best thing about being married to the Bike Doctor: "I always have a nice bike." Current model: Specialized Rock Hopper Favorite place to ride: "the loop" around Hilton Head When she's 82 she will be: hiking Want your own Elvis wedding? www.vivalasvegasweddings.com