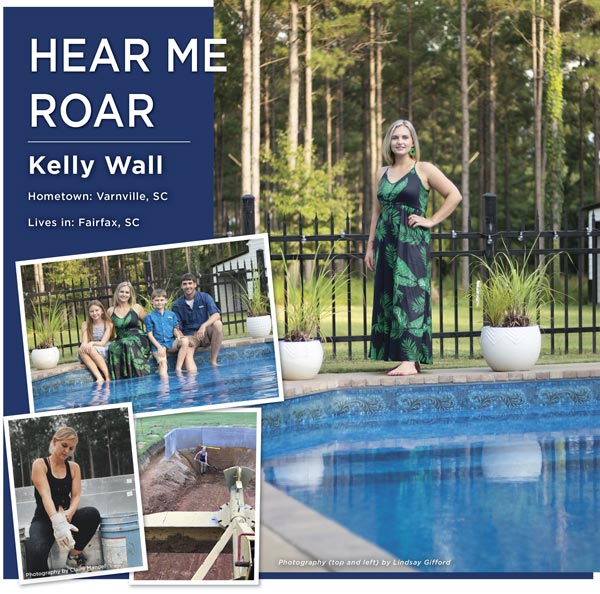 Family: Wife of Josh Wall and mother to Brooke (age 12) and
Ben (age 9). I was adopted and raised by my maternal
grandparents Beverly and Lehmoen Futch.

When it comes to Do-it-Yourself (DIY) projects, Pink Magazine is crowning you queen of all time! Tell us about your most recent DIY.
My husband, Josh, and I were considering putting in a pool and after getting prices and doing some research, I toyed with the idea of installing the pool ourselves. I remember the exact moment I decided to go for it: We were out with some friends and “putting in a pool ourselves,” came up in conversation. A couple of our friends politely said: “You can probably do a lot of things but you CANNOT put in a pool.” Obviously, they made the decision for me; I was determined even though I wasn’t sure I could actually do it. My husband was clear that he could not take on such a project due to work demands, so I knew this would be a solo project.

What in the world made you think you could build a swimming pool by yourself?
My dad always told me I could do anything if I worked hard enough, and I’ve always believed that. I also grew up with a mother who defied the social constructs of traditional gender roles every day with all that she could do and how hard she worked. I lost both of my parents by the time I was 26, so I learned quickly that I was tougher and could do more than I ever realized. When your parents are no longer there to call when you need advice, you find a way to figure things out, and that is what I did with the pool. I spent months doing research; I watched every YouTube video, read every blog and instruction manual I could find on pool installation, plumbing and cement/masonry work. Then I went through it all again. I understood the steps involved and knew each individual step of the process was something I could handle.
What do you do when you have a giant hole in your backyard and begin to doubt yourself? Did you ever feel “over your head” during the project and want to quit? I started the pool installation in early May, so on the weekends I would work on the pool late at night to avoid the heat. There were a few overwhelming moments, in the middle of the night, after hours of isolation, working in an 8-foot-deep hole. I remember feeling like I would never finish and wondering “what was I thinking?” I sat down in the bottom of that hole and cried on more than one occasion, but somehow I would wake up the next day and be ready to get right back to work. My husband always encouraged me, and he offered to hire someone to finish the job a few times, but I was determined to finish it my way. (I have to admit I was comforted in the fact that, if it came down to it, my husband would have found a way to save me and the pool if things went south.)

What was the hardest part? What was the easiest part? What made you laugh the most. What made you curse the most?
The hardest part was the excavation. Even with the majority of dirt removed by heavy equipment, there is still a ton of hand shoveling required to get the detailed slopes and the shape of the pool just right. The easiest part was the plumbing. I’m confident that assembling my daughter’s Barbie Dream House was more difficult than assembling the plumbing for our pool. The best laugh in this process is I got the last laugh! I received tons of unsolicited advice throughout the process, most of which were patronizing remarks disguised as advice. I still smile every time I think about how “I showed them!” That damn orange clay was the bane of my existence and the cause of much swearing. It was as hard as cement, making shoveling nearly impossible (cue pickax and jackhammer), and the orange debris stained everything from my skin, to my shoes, to my house—inside and out. I was an Oompa Loompa for about four months!

What exactly is Step 1 in building your own pool?
After months of research and planning, the first step was to determine the exact location and layout of the pool. I spent a lot of time on this step, I measured and re-measured everything countless times.

A project this enormous surely requires help and support.
Who and what were your sources?
My husband has always been my biggest supporter in all things, and this was no exception. My husband allowed me to dig an enormous hole in our backyard even though neither of us were sure I could actually pull this off. All the while, he knew that if I gave up or botched it, he would have one heck of a mud hole to deal with. How lucky am I to have a partner who has that kind of faith in me, who never stifles my creativity no matter how crazy my projects may seem? My older siblings were also sources of support and encouragement. My brother came to give us a hand when we installed the liner. Also, I hit the “in-law jackpot” when I married Josh. My in-laws bragged about my pool throughout the entire process, even before I was really sure it would turn out, they had more faith in me that I did in myself. My father-in-law helped with excavation, along with my husband. My nephew and one of his friends helped mix cement while I troweled the bottom of the pool; they worked with me for 14 hours straight and learned a little about “girl power” along the way. One step I did not attempt was the wiring to the pool pump. We hired a wonderful electrician, Trey Smiley with Smiley Electrical in Varnville, SC, who I highly recommend.

Confess! How many people thought you were out of your mind?
Tell us what people said to you.
I’m confident that most people thought that I was out of my mind, and I believe some of them still think I’m crazy. One relative seemed to enjoy asking me how it was going and how much water was in that giant hole after an extended rain. Every trip to the home improvement store resulted in someone asking me what I was working on. I found myself explaining how to complete each step, as if I had to prove I was competent. Each conversation would end with them giving me that condescending Southern “bless your heart” smile, and I would go home with that much more motivation. Friends and neighbors began to inquire about my project and each time I would get that familiar condescending smile. Some people would respond with “are you crazy?” I often wondered: “Why is it that when a man wants to put in a pool, people wish him “good luck,” but when a woman sets out to do it, the response is “she must be crazy!” The constant opposition fueled my motivation, and I was determined to prove to my daughter and to
myself that women do not have limits to what they can accomplish.

Well, is it true…If you build it, they will come?
It is true! The pool has been a catalyst for visits and pool days with many of our favorite people who we typically did not get to see often.

If Mom can build a swimming pool, what must your children think of you now? What do you think this achievement has taught your children?
I hope my daughter knows that being a woman is a blessing, not an impairment. I hope she knows she is a man’s equal, and I hope she has the confidence to see herself as an equal partner and not feel inferior to a man. I feel like my son learned women should never be underestimated, and they should be respected and appreciated. My biggest hope is that they both learned that anything is possible if you are willing to put in the hard work. On my birthday following the completion of the pool, my daughter gave me a necklace she picked out herself. The necklace was called “unstoppable,” and it came with a message about determination and drive. That was the best birthday gift I have ever received and one of those magical mom moments when you feel like you might actually be doing something right.

Knowing what you know now, would you do it again?
I would definitely do it all over again. I learned so much about myself during this project, and I was able to teach my children that when someone tells you that you can’t do something, you respond with, “Watch me!”

Is this one for the record books? Will people in your family still be talking about this in 50 years?
My children will one day tell their kids: “You don’t know how easy you have it. Your grandma dug a pool by herself in 100-degree heat.” I’m always surprised at how many people have heard about my pool project. I recently had a new patient come in, someone I had never met, and before he left, he said “Didn’t you put in a pool yourself?”

Who has been your biggest role model in your life?
My mother was the hardest working woman I have ever met. She raised her four children, and then, because we needed her, she adopted and raised three of her grandchildren. Even though I was the youngest of the seven, I was always aware of how amazing she was. She often worked 12-hour shifts, six days a week just so my siblings and I could have everything we needed. There was nothing she couldn’t do and no project beyond her expertise. My mother was both badass and beautiful. She could repair appliances, fix the plumbing and sew you a new dress all in the same day, while her nails, hair and makeup remained pristine. She would do anything for her children like a true lioness; she is who taught me to roar!

So now that you’re done… what are you planning to tackle next? Or are you just going to bask in the pool instead?
All of my energy is focused on work right now. I recently took on the role of Rehab Director at Allendale County Hospital. We have a wonderful rehab team and offer occupational, speech and physical therapies. I want to see our program grow and ensure we meet the needs of the community. Having access to skilled therapy services in our rural area is vital for the overall health of our community.

What are you currently “ROARING” about?
I received many negative reactions when I began this journey, mostly from men. However, I was blown away by the positive and encouraging words I received from women. Women should empower one another, and I think of “roaring” as “cheering” other women on. We should cheer others on when they are successful and be there for them through failures. I hope women who see this feel empowered to take on new challenges and are able to find their inner strength to see it through. I promise it won’t be easy, but it sure is worth it! I cried many tears in the bottom of that 8-foot-deep clay pit and wanted to give up more times than I could count. Somehow, with every new day, came renewed determination.