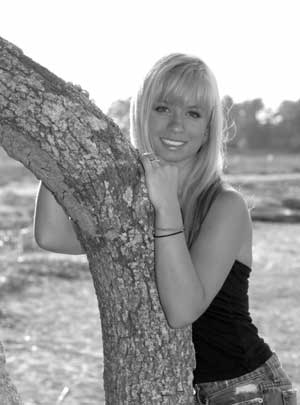 Ever wondered what it would be like to grow up the daughter of a famous rock star?

If you talk to Justice Mellencamp-beautiful blond daughter of all-American rocker John Mellencamp-you might end up with the impression that it's pretty much the same as growing up any other way.
Well, if you count growing up on an idyllic, small-town, sub-tropical island as a "normal" childhood.

"Everything revolved around the beach," said Justice as she fondly recalled her days growing up on Hilton Head Island. "If it was nice, we would immediately meet at the beach or go out in the boats and head to the sandbar. I had a very laidback childhood; we never really worried about anything."

Though she readily admits to having had a "privileged" early life, Justice seems to arrive at this definition by looking at the intangibles rather than the material. Quality of life, beautiful surroundings and parents who cared for her and tried to make sure she had everything she needed were the things that made her so fortunate. Just like small-town kids everywhere, her friends (basically the same ones now as she had in grade school) were all the entertainment she needed.

Justice attended Sea Pines Montessori and graduated from Hilton Head Prep. She went off to college at Indiana University but found it to be "cold and far away," not to mention the culture shock of going from a small private school to a university with 50,000 students. She stuck it out for a year before deciding it wasn't really her thing.

Then life intervened. Justice gave birth to a beautiful baby boy, Trent, now two-and-a-half-years-old. She moved back to the island and went to work for a childhood friend, Dawn, at the Fifth Avenue Hair Salon, where she has been a receptionist and part-time makeup artist for two years.
"I didn't get the four years that most people my age get to figure out what they want to do," admits Justice. "But now that I've had my son, my priorities are his and my number one concern is economic."

With Trent in school and his father, Michael, finishing his last year of college, Justice has become what she calls "the breadwinner of the family." She intends to work hard to provide her son with all the goodness and comfort that her parents gave her. It's a big responsibility to take on at such a young age (Justice is 22 going on 23), but she has no misgivings about the path she chose.

"Yes, I missed out on one chapter," she says, "the one that all my friends graduating from college right now are talking about. But instead I got to have my son. I can't really have regrets when every day I look at someone who brings me so much joy. Five years later, it would have been completely different. It wouldn't have been Trent."

Hobbies: exercising, hanging out with her son, redecorating and reorganizing her house, anything artistic

Fashion tip: unique accessories and a little imagination can turn mediocre clothes into an amazing outfit; "No one has to know it was really $12.99 from Target."

True confession: "I like to be in control of my life; I've had a day planner since I was in the sixth grade."

How she met her soul mate and father of her son: "Michael and I were in the green room together at Montessori. You don't meet someone at age four if you're not supposed to be together."

Inner beauty vs. outer beauty: "Outside beauty will leave you one day. The way you treat people, the way you talk to them, look them in the eye and have a nice conversation with them, that's what really matters."