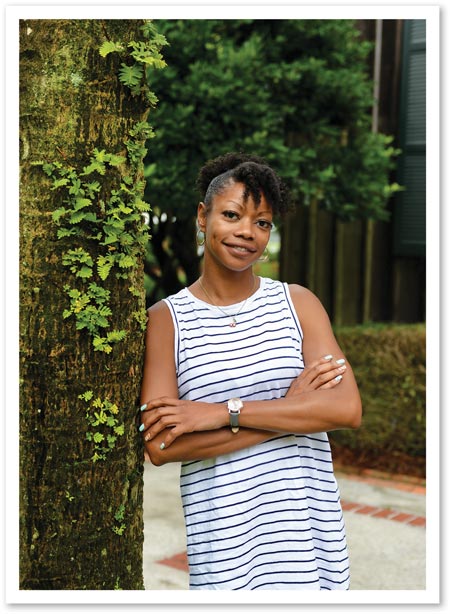 JoAnna McKnight has always loved children. When she was little she wanted to be a teacher and have 12 kids. By the time she got to high school and learned that teachers don’t make any money, she decided to let that dream go. But years later, after her fourth unsuccessful pregnancy—the last being a tragic late-term loss—she circled back to the idea of teaching.

“I enrolled in Technical College of the Lowcountry so I could become a teacher and have children that way,” said JoAnna. “That was my solution. I literally stopped at TCL on my way home from the hospital.”

A year and a half later, she got pregnant with her son Khamari, now 13. Isn’t it funny how when you let go of something, life has a way of bringing it back around?

After finishing her Bachelor’s in early childhood education at University of South Carolina Beaufort, JoAnna began teaching kindergarten at Riverview Charter School in Beaufort. But the problem remained of teachers not earning a living wage, so she also waited tables on the side. Then a friend from college, Megan Linacre, suggested she try working part-time with kids who have autism, simply so she could get home earlier in the evenings. JoAnna was hesitant, as she knew nothing about the disorder, but with Megan’s help, she got trained locally and quickly discovered a new passion.

“I fell in love with the work we were doing,” she said, “helping people who really needed us but didn’t even know we existed.”

Over the following years, as JoAnna relocated with her family to Charleston and then to Maryland, she saw a much more extensive array of schools and programs being offered to children with disabilities. She also began working on a Master’s of Education in Special Ed and Applied Behavioral Analysis from Arizona State University. After returning to Beaufort during the pandemic, she got a job in general education, but all the time she was wondering how to bring everything she had learned back to her hometown. Again, Megan offered a lifeline by introducing her to the director of Boost Behavioral Services in Beaufort, which offers individualized treatment to children with developmental disorders. JoAnna now works there as a registered behavior technician, and she is getting the rest of her supervision hours so she can apply for board certification as an applied behavioral analyst.

“I love this population because it’s so misunderstood,” she said, explaining that Applied Behavioral Analysis is based on the science of behavior and learning, and that it’s typically used to help people with developmental disorders learn to live safer and more fulfilling lives.

“I feel like the work that I’m doing helps give them a voice so they become the people who are telling us about themselves. Everyone deserves to have a meaningful life experience. Just because you have a disability that stops you from working or even talking, that shouldn’t be the end-all-be-all, right? People with disabilities need more support and programs so they can fully have access to all the beauty of life here in the Lowcountry. That’s where I come in. These services may not be well-established here yet, but they’re blooming.”

Roots: Her parents are from Lady’s Island and St. Helena, although they met in New Jersey where JoAnna was born. She grew up back and forth between the two places until her grandmother brought her here in 1990.

Hobbies: going to the beach, hanging with friends, traveling, assistant coaching the Lady’s Island Eagles cheerleading team, and being a 100% sports mom to her athletic son Khamari