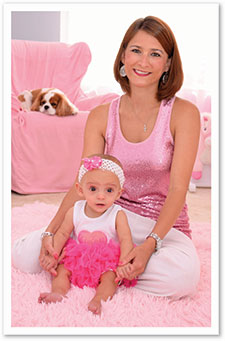 When Jessica and her husband Creg went to the 20-week ultrasound of their first child, they could have never expected the news they would receive and the amazing journey that laid ahead. “At 20 weeks we learned that [Payton] had stopped growing,” began Jessica. “The diagnosis was absent end diastolic flow and basically she was not getting enough nutrients. We knew then she was going to be a preemie.”

As Jessica recalls her story, we are sitting at a coffee shop. Now nine months old, baby Payton lets out a happy squeak and wiggles in her infant car seat causing the circular sign hanging from its handle to rock. I look closer at the sign. It reads “Preemie! That means I’m extra small, extra cute and extra sensitive! No touching! Your germs are too big for me!” and I resist the urge to tickle Payton’s sweet baby thighs. Jessica looks down at Payton and smiles. They have a special and tender bond.

“We were referred to MUSC (Medical University of South Carolina, Charleston, SC) and the goal was to first make it to 28 weeks and then to 32 weeks,” said Jessica. “But at 29 weeks I went for my biweekly check-up and my blood pressure was 190 over 120. It’s funny now, but it wasn’t then. I remember the doctor telling me, ‘You have to go to the hospital because you're about to have a stroke.’”

Jessica called Creg, a UPS driver whose company truck had broken down in St. Helena. “It was a crazy time,” laughed Jessica. As Jessica continues with her story, I am awed by her grace and composure. This Beaufort native is a true ‘steel magnolia’.

It turned out the chest pain she had been feeling the week prior was due to the fact that she had developed HELLP syndrome—a life-threatening pregnancy complication in which the mother suffers from hemolysis, elevated liver enzymes and low platelet count. Doctors were now in a delicate race to save both mother and daughter. After 36 hours of steroids and magnesium injections to give baby Payton a fighting chance, Jessica was wheeled into surgery for a C-section.

“I delivered her at 12:06 p.m.,” explained Jessica. “She weighed one pound, nine ounces and was 12 inches long. When she cried, she sounded like a small kitten.” MUSC specialists let Jessica see her newborn only for a second before they began lifesaving measures to resuscitate and ventilate. It would be five days until Jessica, an at-risk patient herself, would be able to hold Payton. And it would be 66 days in the NICU before she would be able to bring her home.

“While Payton was in the hospital I would get there at nine in the morning and meet with her medical team,” said Jessica. Her team consisted of an attending neonatologist, a resident neonatologist, a pediatrician, pharmacist and attending nurse. She then spent the next 10 to 12 hours sitting beside Payton, who was in a covered incubator to recreate the womb environment. “I could only see her during care time, which was every four hours and she would get one ml of breast milk, her temperature checked and her diaper changed.”

During that time Jessica learned many valuable life lessons. “You don’t think things like this can happen to you, but they can and they do. I wouldn’t change one thing, though. She has taught me so much about strength and faith and her milestones are even more exciting than a full term baby’s. I am so thankful for her.” 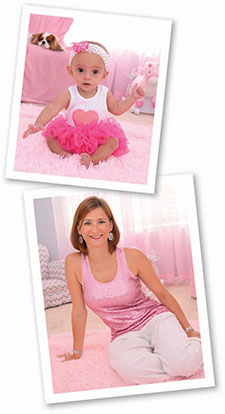 Creg was driving down the road: when he saw a sign with the name Payton. He texted Jessica that should be the baby’s name and she immediately agreed.

Baby Payton: is exceeding her therapists’ expectations. They would like for her to be at a six-month developmental level and she is at a seven-month level!

What does Jessica find herself saying all day long? “Sadie, Payton you two stop that!” Sadie is a King Charles Spaniel and Payton’s best friend.

Jessica still keeps in touch: with a mother whose son was in the NICU beside Payton, as well as some of the MUSC nurses.

Jessica’s advice to any mother: “I learned I am not in control and everything is going to work like it is supposed to.”