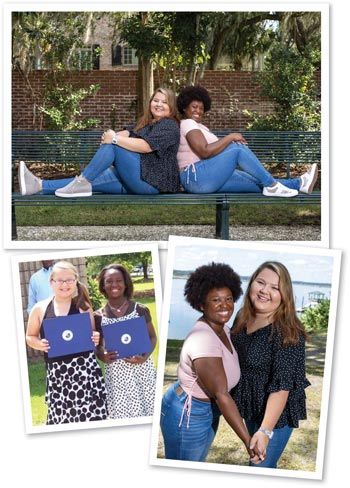 Walking into the first day of kindergarten can seem like one of the scariest moments in a little one’s life. Everything is new, big and unfamiliar. Hooked to mama or daddy’s leg, tiny tears trickle down sweet cheeks to the tune of the desperate cry of “no” over and over again. By day’s end, parents reappear, and the same hesitant child is now hesitant to go home. Why? New friends, of course.

Friends are the biggest factor for anyone to feel comfortable, especially on the first day of anything. Brie Jones and I met on the first day of kindergarten 16 years ago, and the rest is history. Through one of us changing schools, high school blues and two different colleges, our connection seemed to never sever.

Our story beings in the halls of Hilton Head Island IB Elementary School. We met the first day of kindergarten, but not in the way you may think. We were not in the same class, but both went to the Island Rec Center for an after school program where we instantly connected. With our new squad, we began to rule the after school gang and grew our friend group. When first grade came around, we got extremely lucky and were placed in the same classroom with the same teacher—Mrs. Penale. Our friendship grew closer and stronger; we were two peas in a pod. Throughout the rest of elementary school, we weren’t so fortunate to get the same teachers, but after school was our sacred place. The inevitable sleepovers, play dates and birthday parties kept our flame going, but the sad and bitter end to our daily interaction came to a halt when I transferred to Hilton Head Christian Academy for my middle and high school years. Our relationship was strong, but at that point, it wasn’t strong enough to stand against different schools, with no social media and no phones.

But, our friendship never left my heart; I thought of her often. We would run into each other occasionally at a store or a Rec Center festival and always greeted each other with big smiles and tight hugs. As the years passed, I always hoped she was healthy, happy and keeping our friendship in her best memories just like me.

Though we both embarked to separate colleges, it was Christmas break 2018 when serendipity took full effect.

I was at Walmart, of all places, with another friend, buying Christmas decorations, when I had to do a “full turn around and back it up” to realize my childhood bestie was standing down the aisle. With open arms and massive smiles on our faces, we instantly reconnected like we were back in elementary school, a feeling we could never forget. Adding each other’s phone numbers, following each other on social media was the instant reaction, but what came after was so much more. Text after text, hour-long phone calls, it was like we never separated.
After Brie graduated from Newberry College in 2020, she moved back to Hilton Head with her family. While I moved to Bluffton, Brie’s family also relocated to Bluffton and it has been a boon to our friendship.

Something that has kept our relationship so extremely strong over the years is our connection. Some say we go together like peanut butter and jelly, we complement each other so well. As strong, Leo women, we both characterize ourselves as caring, spontaneous, loyal and extremely fun! We both have positive outlooks on life and want to live it to the fullest. We inspire each other and are each other’s number one fan.

Brie Jones is funny, charismatic and one hell of a woman. She cares for others like no one else. Giving spontaneous gifts, having sincere confidential talks, and constantly holding up #1 foam finger, Brie is someone to keep in your corner.

Here’s what she had to say about me: “Jacie is hilarious, optimistic, intelligent, gorgeous and adventurous. My forever friend, soul sister and my number one fan. Our deep talks keep us sane, and our love for each other is stronger than ever. Jacie is loyal, she can have me rolling for hours laughing, and she gives all the best advice. She is my best friend, and I couldn’t do life with out her.”

We both can’t believe our luck to be back together after 10 years of not seeing each other. We will have a bond forever, no matter where we go, or however long it’s been. We are still those same two peas from day one and are so thankful to have each other. Friends like Brie are hard to come by.

I have always said the friends that say goodbye with an “I love you” are the ones you’ll have forever. I guess that’s why it’s called BFF.

Up Close:
#FriendshipGoals: We see each other once a week, sometimes every other week because we both have super busy schedules, but it’s fresh and fun every time!

Almost Twins: Brie and I were born 15 days apart—both August Leo queens! No wonder we get along.

Inside Joke: Brie and I will talk a lot about the past and go back and forth: She will say, “Do you remember so and so?” I always respond: “Wait, they’re alive?” I know good and well they are, it has just been forever since I’ve seen them. LOL

Boy Crazy: Our friendship is built on many things, including lots of boy talk. Our taste in men is different, which is a good thing for friends so close.

Dancing Queens: Dancing, singing and all things music, Brie and I share a playlist with all of our memory songs—new bops, and of course, Rhianna!