Bringing the Arts to Life in Rural South Carolina 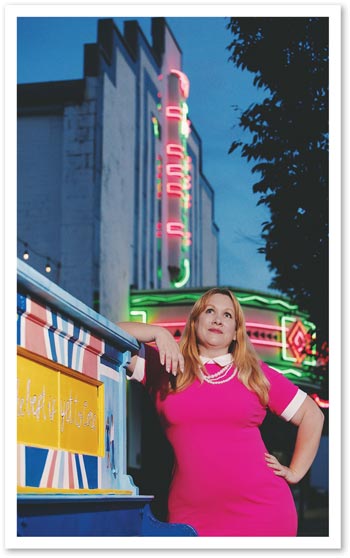 Since moving to Hampton County more than a decade ago, Heather Bruemmer has used her passion for the arts and skills in making things happen to help redefine rural living. Soon after her arrival, the mother of six realized there was a lack of arts programs in the community, and she set out to change that, rallying with other local moms and spearheading her first campaign to bring art to Hampton County. If one wants change, one must change and first on the list was changing the Estill Fall Festival to the Estill Fall Arts Festival.

That was only the beginning of what would become a driving passion over the next 10 years to bring a wide variety of cultural arts programs to Hampton and help to provide the community with what is now a growing and thriving art scene. From those early days in bringing art to her local fall festival, she was invited to become a team member on the South Carolina Arts Commission’s Art of Community: Rural SC initiative. It was during that time, while working on a mural project in Estill, that she met Clay Bishop (who was at that time running for Town Council) at a Town Council meeting. They had a conversation that would go on to not only change her life … but also improve the quality of life in Hampton County for current and future residents.

“Like all candidates, Clay was talking about how to get companies to relocate their businesses here,” Heather recalled. “I told him that he was putting the cart before the horse, and that what needed to happen first was to make Hampton a place where people want to live. I talked to him about the importance of improving the quality of life here first, and then the companies will follow.”

When Clay Bishop won a seat on town council, he remembered that conversation with Heather and turned to her to help fulfill her advice by enhancing cultural arts in the community. He recommended her for the Hampton County Arts Council in 2019, and she was officially named Director of the Hampton County Rural Arts Development Initiative in 2021. As a member of the Hampton Arts Council, she has played an instrumental role in making a huge difference in many ways, including helping to refurbish the Stanley Arts Center, which now serves as a popular, county-run, community arts center, event space and gallery for large exhibitions. Soon after, her passion and success caught the attention of Hampton County Administrator Rose Dobson-Elliott. Rose asked Heather to help restructure the suspended non-profit organization “Hampton Friends of the Arts,” turning to her to “fix” the organization and make it a “functional and trustworthy” organization dedicated to doing what Heather does best: increasing access to world-class art.

Fixing the struggling non-profit is just what Heather did, and is an understatement for the transformation that occurred with the now thriving organization. After working to have its 501(c)3 nonprofit status reinstated, Heather’s next order of business had a dramatic positive impact on the entire Hampton community: The renovation and reopening of the historic Palmetto Theater, which has been a valued landmark in Hampton County for years.

“We knew that the reopening of the Palmetto Theater could play such an important role in helping to bring arts, culture and an overall better quality of life to local residents,” said Heather, who worked closely with “Hampton Friends of the Arts” Board Chairman John Wright to turn this vision into a reality. “In addition, we knew that being able to bring the showing of movies back to Hampton County, where there isn’t another local movie theater within a 60-minute drive, would be something that families throughout the community would value, and we set out to raise the funds to make this happen.”

Once again, Heather (who this year was honored by the Hampton County Chamber of Commerce with its 2021 “Person of the Year” award) made it happen. Working closely with John to bring the community together to help raise $80,000, necessary renovations throughout the theater and major technology upgrades, which included digital projection, surround-sound and a new 28-foot movie screen became a reality. Now, the historic Palmetto Theater shows first-run movies and also offers a wide range of concerts, musical events, theater performances and arts programming! It is a beloved and thriving “hub of activity” in Hampton County.

“Bringing the historic Palmetto Theater back to Hampton County held a great deal of meaning for many residents, and we were so happy to have been able to make this happen for both current and future residents and families of Hampton,” Heather said, noting that she was thrilled to have the theater reopen in conjunction with the celebration of its 75th anniversary in the community, and orchestrated a black-tie gala in honor of the celebratory event.

But Heather is not done! She is continuing her mission and looking to more exciting programming launching in the days, weeks and months ahead. In particular, a new television broadcasting initiative will launch this month called MelonVision. It will offer independently-produced local content and be available on all television apps, as well as available for viewing on the Hampton County Arts Council website.

She also excitedly talks about the upcoming launch of a new summer arts program, funded by the Hampton County School District. Consisting of two separate arts camps, the program will include a “Paint the Town”/Art-in-the-Crosswalk mural painting program where students will learn and engage in mural painting to beautify the area’s blighted and unused spaces.

Beautifying Hampton County. It’s something that has been the driving force behind everything Heather Bruemmer has done and continues to do. She not only is an advocate for redefining the arts in rural South Carolina, she is making it happen. Her work is making Hampton County a beautiful place to live; go see for yourself.

For more information about Hampton Friends of the Arts, and a complete listing of upcoming performances, exhibits, programs and movies at the Palmetto Theater, visit www.hamptoncountyarts.org and www.palmettotheater.org.
Street Piano Pictured Above by Emrie Trent