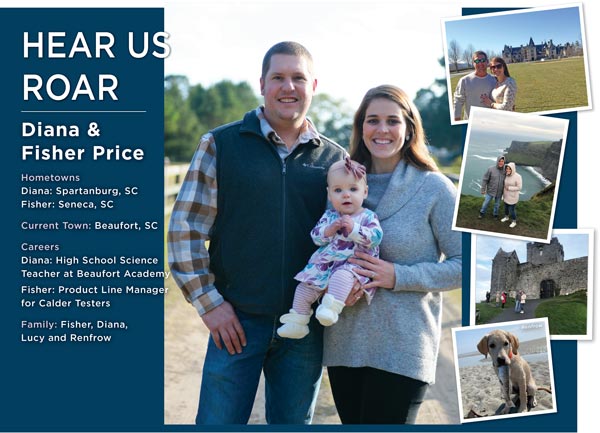 Parents do so much for their children, but, Diana, your dad really went above and beyond! Tell us about it:
My dad met Fisher at a local restaurant in Spartanburg where they both went for “BOGO wing night.” My dad kept telling me about his “cool friend Fisher,” and I would roll my eyes. I finally said to him, “If he is so cool then invite him over for dinner.”

And then what happened?
Long story short, HE DID! He called Fisher and told him he was smoking some BBQ and asked if he wanted to come over. Fisher interpreted this as my dad and his friends, so he said sure. He arrived—how do I put it—not in the nicest of clothes (ripped jeans, stained shirt) and quickly realized his mistake when he came in to see my dad, my mom, my mom’s twin sister, and me in the kitchen. Of course he played it cool, and we hung out all night by a big fire outside. Later he revealed that he had no clue and didn’t realize it was a set up. We, to this day, joke that it was a total set up by my dad.

Tell us about your engagement? Was it a total surprise? Well, when Fisher said, “Let’s go to the Biltmore House” I knew it was the big day! I quickly painted my nails. I kept trying to figure out if there was a ring box in his pocket, so I was kind of frisking him all day hoping to get some confirmation—haha! He asked another couple close by to take our picture and got down on one knee. When we got home my roommates had planned an engagement party for us, and we had a blast celebrating.

What is the most special thing about your spouse?
Diana: He is so calm. Truly, nothing ruffles his feathers. Blow out diaper? No problem for Fisher. Lucy screaming in the car? It’s like he doesn’t even hear it. Many times when I am anxious, he is calm. Truly the ying to my yang.
Fisher: All the love she has for me, the dog, and our child. She loves hard.

What would you say is one thing that keeps your relationship solid, enjoyable and happy?
Fisher: Hard work—both of us are willing to compromise, and we just enjoy being with each other.
Diana: I echo what Fisher said. We truly enjoy being together and love the company of each other. We work hard and play hard. We help each other out in so many ways and never take advantage of one another, or have set expectations for the other person.

What’s the most fun/crazy/amazing adventure y’all have done together, so far? One of our favorite trips was traveling to Ireland. We flew separately (why, I’m not sure). We went to the Savannah airport together but got on different planes and flew through different connecting airports. We managed to both land in Dublin within 45 minutes of each other! Even though we flew through the night and hadn’t slept at ALL, I convinced Fisher we needed to drive straight across the country to the west coast right after landing. I am not sure why I wanted to start our trip over there, but I had in my head we should. We rented a car and although we were exhausted, I promised him I would stay awake and help him drive (on the wrong side of the road). We weren’t in that car for twenty minutes, and I was asleep. I woke up and felt awful, but we laughed and laughed about it. He hasn’t let me forget it. My favorite part of that trip was a big truck honking at him while we were inside of a gas station because he was parked in the way. He realized his mistake and quickly ran out to the car to move it, but got in the wrong side of the car (the passenger side instead of the driver's side since they are opposite). Oh my gosh, I have never laughed so hard. He had to get out of the car and run around to the driver’s side and he was mortified. All in all, we drove all over the country and laughed the entire time and enjoyed each other’s company. We will never forget that trip.

You are new parents of a baby girl! What do you see as each other’s parenting superpower?
Diana: His calm demeanor. When I am stressed about dropping the swaddle, or nap time fails, or whether or not the bath water is too hot, he just has this way of making every situation seem like no big deal.
Fisher: She’s just a super mom—that’s it.

Your friends say you remind them all the time of how beautiful the Lowcountry is. What makes you love this place with all your heart? I just remember when we first moved here I would be in absolute awe going over a bridge because of how beautiful it is. I would shout, "SLOW DOWN," so I could enjoy it more! I promised myself to never take the views in Beaufort for granted.

Life is better when…
Diana: Everyone gets along and is happy!
Fisher: I am offshore.

What antics have come from being named Mr. and Mrs. Fisher Price?
Just a couple of chuckles and laughs and “are you serious?” type responses. Of course we are asked (jokingly) if we own the toy company, and my response is always that I wouldn’t have a job if we did!

What is on your bucket lists for 2022?
Diana: I keep trying to convince Fisher for us to get a camper and drive out west. Not sure that will happen in 2022, but it WILL happen eventually!
Fisher: Work less and have more fun with the family.

What are you currently ROARING about?
Fisher and I are naturally busy and on-the-go people. Since having a child, we have really learned to slow down and find joy in the small moments. Being together as a family is the most important thing to us right now. Lucy is growing up so fast, and we don’t want to miss a single moment of it!

Being humorous
Being patient

Choosing a restaurant
Fishing
Making weekend
plans
Diana's Response
Me
Tie
Fisher, for sure
Me, I apologize too much.
Me
Tie
We can both change
a mean diaper.
Fisher
Fisher

ME!
I think we both remind each
other how blessed we are, and
we are both grateful for our life.
Fisher can have the remote, you'll find me next to him on the couch with a book in my hand!
Fisher
Fisher—I mean just look at his name!
Me, because "making weekend plans" is something Fisher has never even thought of doing!
Fisher's Response
Tie
Me
Me
We both stink at that!
Diana
Diana
Both of us, but if I have to choose, then Diana
Me
Neither of us are patient.
Diana
We are both very grateful.

Me, she stinks at that.
Fishing? Seriously? Me.
Diana