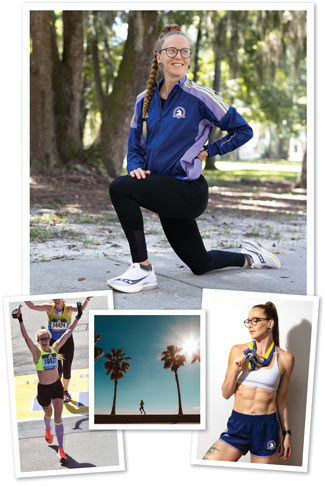 Christina Boughton looks like she could beat frat boys in an arm-wrestling competition, and she’s currently training for the Chicago Marathon. But the journey that brought her to this point started with fast food, partying and a family history of cardiovascular disease.

“Growing up we had a very general knowledge of what healthy eating was,” she says, “but once I turned 18 and moved out, I started following what other teenagers were eating. I definitely did not love the way I looked.”

While she was pregnant with her daughter, Christina gained almost 70 pounds. Then she had a son and her pre-baby weight receded even further. But when her husband, a photographer, had to take pictures at the finish line of the Chilly Bean Race on Lady’s Island, Christina put the babies in a double stroller and ran/walked the 5K. She was crossing the finish line when a thought occurred to her: what if she committed to a 5K every month of 2018? By the end of that year she’d done 14.

“I just wanted to see if I could get fast, lose weight and run three miles without stopping,” recalls Christina, who spent the following year running 10Ks. “And I did all those things, but it didn’t really stick.”

Despite meeting her goals and progressing as a runner, she still wasn’t getting back to her pre-baby weight. Then along came the pandemic, which was a blessing in disguise for Christina and her family. Restaurants shut down, so she had to cook at home, researching healthy recipes and relying on whole foods. She set new goals, started doing weight training and cardio, and most importantly she quit drinking.

“I was a big party girl since age 15,” says Christina, “and it carried over into my adult life with society standards like ‘mommy needs wine.’ I wasn’t really conscious of my alcohol consumption, and that became a slippery slope of loosened inhibitions. After three glasses of wine you sit down and eat a whole pack of Oreos. It got to the point where I was buying big bottles of liquor and sneaking them inside so my husband wouldn’t say, ‘wow, didn’t you just buy one last week?’”

After a year without alcohol, Christina was feeling and running so well that she saw no reason to go back to it. The baby weight that had haunted her for six years finally dropped away, and the freedom from hangovers and intrusive thoughts about alcohol was priceless. She ran two half-marathons in 2020, then the following year she did two full marathons, the second with a time that qualified her for the legendary Boston Marathon.

“You really get to know yourself when you have to spend hours alone,” said Christina. “One of the things that came back to me was an old boyfriend who had said I would never be more than a messy party girl, and I kept thinking about that while I was training for the Boston Marathon. It’s known for this massive hill at mile 20, and as I was cresting it, I released that past self and realized I am SO much more.”

Incidentally, 2022 marks the 50th anniversary of women being allowed to participate in the Boston Marathon; before that it was considered too dangerous for our bodies. Next up for Christina is the Chicago Marathon, which she will run this month with a totally new motivation.

“My why has evolved so many times,” she says, getting a little emotional. “The night before Boston, my sister-in-law told me to run mile 23 for her because she knew that was the point when I struggled before. So I thought of her the whole time, and it was my fastest mile—but I couldn’t think about her without thinking of my niece, my daughter, myself, my mom, my sister, all the women in my family, and those who came before us. Now I run for love. My daughter watches me and knows she can do anything. Women can do anything.”

Current goal: To become one of only about 4,000 “six-star finishers” worldwide, which means completing the six major marathons in Chicago, New York, Boston, London, Tokyo and Berlin.