Hanging on to Faith in the Midst of Grief 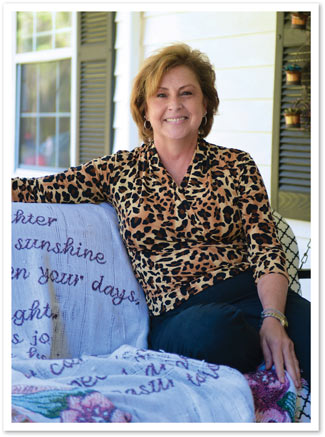 Christie Cregg is quick to laugh, despite the immense burden of sorrow she carries. But behind the brave smile lie tears which, these days, are always close to the surface.

“When I look at old pictures of myself,” she says, “I see that a part of my smile is gone. I don’t think it will ever come back.”

Christie is from Cobbtown, Georgia, where she grew up in a little wooden shack with six brothers and no running water. She started working the tobacco fields at age 6, and by 12 she became an instant mother of six when her mom took on her brother’s children. A life of hardship had left Christie’s parents emotionally shut down, and she was headed the same way. Yet she can recall sitting on the back porch, swinging her legs and talking candidly to a very special “friend”—it wasn’t until the first time she attended church at age 10 that she realized her friend was God. “It was like a lightbulb went off that this person I’d been talking to was real,” she says.

As life went on, Christie faced every sort of challenge imaginable. She knew her family was poor, so she never allowed herself to dream, until one day she saw a lady with nice hair and clean clothes—that’s when she decided she wanted to be a secretary. A teacher helped her get into technical college, but after working her way through school, she endured sexual harassment at nearly every job she ever had. At 19 she gave birth to her first son, but when the marriage fell apart, her mother-in-law mobilized the good ol’ boy network to have 2-year-old James ripped away from her. Only the birth of her second son, Michael, saved her from the grip of a crippling depression.

After several failed relationships, Christie was ready to give up until her hairdresser convinced her to go on a blind date—that’s how she met Keith, her husband of 32 years. Together they had Mitchell and Victoria, but while Christie was still a young mother, she was diagnosed with rheumatoid arthritis. More recently she was diagnosed with breast cancer and had both breasts removed, but the cancer came back in the exact same spot. She beat it just to get deathly ill with Covid.

All this time Christie was talking to God, the friend who had been with her through everything. But on September 6, 2021, she got a phone call that shook the very foundation of her belief. Her beloved son Michael had gone into cardiac arrest and died on the floor. EMTs brought him back, but by then he had been without oxygen so long that the damage to his brain was irreversible. The funny, quick-witted, chaos-loving son she adored was gone.

Doctors wanted to take him off the ventilator and let his life slip away, but Christie insisted they teach her how to care for him. She brought Michael home, put his bed in the living room so he could be part of the family, and for nearly 5 months she saw to his every need. “He was an infant again,” she said. “All day I would feed, change and wash him. But I was growing angry and disillusioned because I could not understand why this friend I had would turn His back on me. I prayed to God to take my life and give Michael his back...but He didn’t do it.”

Eventually Michael’s body began shutting down. On February 16, 2022 he passed away with Christie curled up next to him in bed, one hand in his and the other cradling his head. She could do nothing but wail and wonder if she would ever be able to breathe again. Of all the trials she’s been through, this is the most unbearable; of all the scars she carries, visible and invisible, this one pains her the deepest. And yet, life goes on.

Christie continues to care tirelessly for her family, including the grandson she’s raising. She believes in saying a kind word to the cashier at Walmart to change their frown into a smile, carrying kindness with her everywhere she goes. She has survived so much—by strength, love and the grace of God, and each day that she’s vertical offers a chance to heal.

“I still have my faith,” says Christie, who wants to help with grief counseling at her church because she knows that only those who have truly lived it can understand. “It’s not as strong as it was, but it’s there. And I’m actively working on it daily. There’s a song that says, ‘My heart needs a surgeon, my soul needs a friend, so I’ll run to the Father again and again.’ That is my mantra. No one can fix this hole in my heart except Him.”