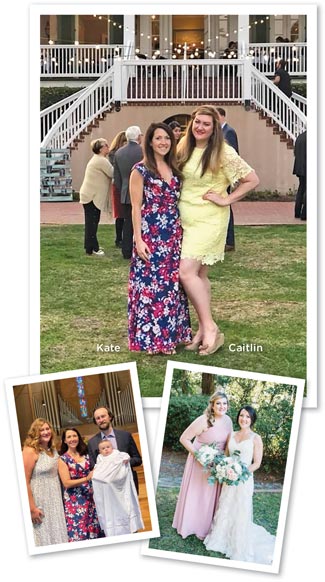 Call it serendipity, kismet, destiny, or a God wink. Two young college graduates each relocate to Hilton Head to start their careers and their lives—alone with no family. A chance meeting at the Black Marlin restaurant resulted in a nine-year friendship (that both women believe will last a lifetime), as well as a marriage.

Dollar Daiquiri Day brought them to the Black Marlin and crazy balloon hats brought them together. After four years, Caitlin Lee had settled in to her new life and made some friends. So on a beautiful autumn afternoon, she and three of her guy friends went to the restaurant to watch college football. There was a man making balloon hats for customers, and Caitlin said she and her friends didn’t have any cash to pay him, so they exchanged shots of Fireball for balloon hats. “We were hootin’ and hollerin’ and the hats got crazier and crazier and more intricate. I kept seeing this girl watching us,” Caitlin said.

It was Kate Cornet. An old friend was coming to visit Kate, so she had asked a work colleague for a suggestion on what they should do for fun since she had just moved to Hilton Head. Kate followed her suggestion, and they went to the Black Marlin. As she watched Caitlin’s group having such fun, she said she felt envious because she had no local friends. “I was having a tough time when I moved here.”

Caitlin said they all started talking. “Back then it was classic 2014 at the Triangle and we told Kate about it, how it was where everyone hung out after dark. That night she showed up.” Kate asked Caitlin for her phone number, and the relationship took off.

Kate and Caitlin bonded and over the years have attended every festival on Hilton Head. They travelled every year to the Tortuga Music Festival in Fort Lauderdale and made other trips to Panama City, Charleston and Savannah. Caitlin said that when you’re in your 20s, making friends can be spontaneous, but it’s harder in your 30s because you grow up and life gets busy.

“I could not have fallen into a better place with friends,” Kate said. “The Universe just brought us together.”

Fast forward: Kate married Drew, and Caitlin was a bridesmaid. “Drew understands the importance of our friendship because Caitlin is the No. 1 person who Drew trusts because of their friendship.” Kate and Drew now have an 18-month old son, Cooper, and another baby on the way. Caitlin said, “I’m as single as can be. Even when Drew and Kate dated, the three of us hung out, and they never made me feel like a third wheel. I’m glad to have Kate on this planet, on this spinning rock. Kate’s the real deal, and I wish everyone could have a friend like her.”

In 2019 Caitlin was hospitalized due to Cauda Equina Syndrome, a rare and serious condition that causes extreme pressure and swelling of the nerves at the end of the spinal cord and is a medical emergency that calls for urgent surgical intervention. Caitlin had surgery on Super Bowl Sunday and then had three months of inpatient rehab. “It was really hard,” she said. I lost everything in a week, and I was out of commission for a year. I don’t know what I would do without Kate. She visited me every day and made sure I had creature comforts.”

“Kate packed my hospital bag for me and on Valentine’s Day, the nurses aide was determined that I would get dressed. The first thing she pulled out of the bag was a pair of black mesh, leopard undies. Kate wanted to dress me sassy. She told me, ‘You never know who you’ll meet in a hospital!’”

Caitlin couldn’t drive, so Kate helped. For six months Kate did her laundry and changed her sheets. “It was traumatic, her Mom wasn’t here, so she leaned on me,” Kate said.

Since then both of their mothers have moved here, and they share their involvement in the Daughters of the American Revolution and their interests in genealogy. Their families now know each other and have been to weddings and parties together.

Kate and Caitlin are committed to their friendship and make sure they are together in the same room at least once a month, and they still enjoy live music, oyster roasts and daiquiris.

Twinsies: Caitlin and Kate share the “same vibe” and without planning it, they often wear the same thing; once they even wore the same swimsuits. Caitlin is six-foot-one and Kate is 5-foot-six with different body types, so they get a kick out of this.

Slightly sarcastic: Once a guy asked them if they were sisters. Caitlin said yes and that their parents named them Kate and Caitlin.