Shrimping, Crabbing and Oystering: A Southern Culture on the Brink of Extinction The Grit Behind the New Exhibit at Port Royal Sound Foundation’s Maritime Center 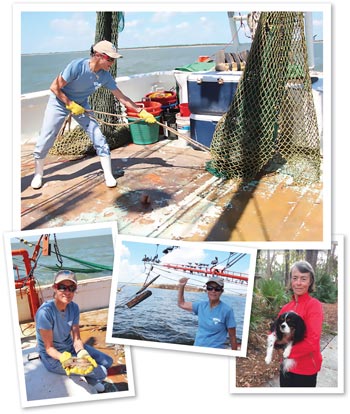 Three blank walls. It was all Beverly Jennings needed to set off on a 10-year odyssey that would immerse her into the rough and gritty world of commercial fishing.

Tasked with creating an exhibit on shrimping, crabbing and oystering for the Port Royal Sound Foundation’s Maritime Center in Okatie, the plucky Hilton Head Island retiree began trolling the briny docks of coastal Carolina to learn everything she could about a Southern culture on the brink of extinction.

In the process, she discovered a microcosm of Beaufort County far removed from her comfortable life in Sea Pines. The rugged, weathered men who work on trawlers spend days and weeks at sea, braving unpredictable and perilous waters in search of a big catch. It’s hard, dirty work with long hours and uncertain outcomes.

And Beverly couldn’t have felt more at home.

A force of nature in her own right, the 5-foot, 6½-inch, 115-pound septuagenarian became fascinated by this tight-knit community of fishermen who keep to themselves but always have each other’s back. Initially brushed off by the busy crews, she persevered, slowly gaining their trust and respect.

“Once they realized what I was doing, they were very supportive and incredibly generous with their time,” Beverly said. “They want to preserve their legacy.”

The exhibit she created with photographs, videos, maps, artifacts and tools of the trade fills the old oyster shucking room at the former Lemon Island Marina, transformed by the Port Royal Sound Foundation into the Maritime Center, an interactive museum to educate the public on the vital importance of this ocean channel bordered by St. Helena Island and Beaufort to the north and Hilton Head Island and Bluffton to the south.

“Beverly worked tirelessly to curate this major exhibit for us—all on a volunteer basis,” said Port Royal Sound Foundation Executive Director Jody Hayward. “She has an incredible passion for the Port Royal Sound and the people who make their livings plying its waters.”
Beverly first became involved with the foundation in 2010 after meeting the former director at a South Carolina Master Naturalist class on Spring Island. At the time, the foundation was working to develop the Maritime Center. Beverly offered to help with the project and was invited to join the exhibit committee.

It was a natural fit for Beverly, who grew up fishing from a small, wooden rowboat her father built her in the garage of their Darien, Connecticut, home. She was 6 years old when she manned the “Little Fish” for the first time in their neighbor’s pond. By the time she was 8, she was piloting boat owners to their moorings at the nearby Noroton Yacht Club.

As a member of the Port Royal Sound Foundation’s exhibit committee, Beverly volunteered to curate a permanent exhibit on shrimp, oysters and crabs. With no formal training in the marine sciences, she turned to the area’s fishermen to educate herself. Over the course of five years, she interviewed some 35 shrimpers and learned of their struggle to keep their dwindling commercial enterprises afloat amid rising fuel prices and a tripling of U.S. seafood imports in the last 20 years.

Determined to tell their story, she continued to seek out the few remaining trawler captains still operating along the coast from Savannah to Georgetown. By the time she had completed her quest, she had spoken with more than 65 fishermen. This January, six years after the Maritime Center opened, she published Shrimp Tales: Small Bites of History.

Her admiration and respect for her new-found friends is reflected in her book. Within its 320 pages are 820 photographs, illustrations, seafood recipes, a history of the industry and personal stories from the shrimpers she interviewed.

“You have to love what you do to get up at three in the morning and work until sundown,” Beverly said. “Shrimpers see every day as a gift. When they pull up their net, they never known what will be in it.”

Up Close:
Watersport Hobbies: Kayaking in the tidal creeks of Calibogue Sound.

Landlubber Hobbies: A competitive tennis player and golfer, Beverly was the U.S female winner of the 2012 BMW Golf Cup International, earning a place in the World Finals held in South Africa. She also competed in the Senior Ladies Doubles division at the U.S.-Japan Friendship Cup tennis tournaments in 2010 and 2011.

Buy the Book: Shrimp Tales: Small Bites of History can be purchased on Amazon.com or in some 65 shops throughout the Lowcountry and beyond. Beverly is donating all of the proceeds from book sales to the South Carolina Seafood Alliance.