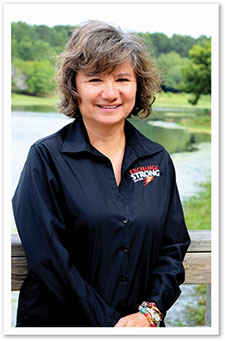 Most people experience adversity in their lives, but some get a much larger dose than others.  Angel Flewelling was born to a Philippino mom and an American dad, who was stationed in the Philippines in the Navy. She was nine months old when her father was transferred to duty in California. The story of Angel’s early life is heartbreaking. She and her siblings suffered years of physical and emotional abuse. Although her mother could sometimes be extremely kind, she was prone to frequent outbursts of rage. Angel never felt safe.

Angel was also the target of sexual abuse by a brother and a neighbor.  Because her father was assigned to duty at sea for several months at a time, the mother was the sole disciplinarian. When he came home in between assignments, Angel’s mother acted rather normal. Angel was afraid to tell her father; there was no other family in the area to confide in and it was too scary to tell her teachers. Other than one close friend she could talk to, Angel felt alone. So she put on her best face every day and went off to school.

Soon after graduating from high school, Angel met and married Brian Flewelling. They spent two more years in California, where he was stationed at Camp Pendleton. Their precious son Matthew soon arrived. In 1986 Brian was transferred to Beaufort, SC. Their son was still a baby and Angel was not ready to return to work. She and Brian soon began volunteering with CAPA (Child Abuse Prevention Association) and provided babysitting services several times a week. This evolved into part-time employment as relief house parents. Along this journey of healing and self-discovery, Angel made a commitment to do everything she could to ensure that others do not have to suffer abuse at the hands of their parents.

She credits Brian with supporting her through the process of forgiveness and helping her grow tremendously as a person. They were both so moved by the stories of the children they were serving at CAPA, they decided to become foster parents.  As young and energetic parents themselves, they were able to offer love and direction to teenagers who desperately needed their support. They now have 12 grown foster children. Many of them still keep in touch.

With an innate servant's heart, Angel was first introduced to the Beaufort chapter of the National Exchange Club in 1995 by Susan Cato, the Director of CAPA.  From its humble beginnings in 1911 in Detroit, Michigan, Exchange has become a progressive national service organization, focused on leadership, service, friendship and fulfillment. There are now more than 700 clubs and 21,000 members in the United States and Puerto Rico. Exchange Clubs sponsor activities under the organization’s Programs of Service–Americanism, Youth Programs and Community Service–as well as its National Project, the prevention of child abuse. Each year, communities benefit from the promotion of pride in our great country, college scholarships, youth mentoring, service to the underprivileged and other services tailored to the needs of its citizens. Angel's local club works each day to make Beaufort a better and safer place to live. They work closely with many organizations to carry out their mission, including CAPA. They organize quarterly trash cleanup days at the Broad River Boat Landing boat ramp. The club recently sponsored a golf tournament to raise funds for a paramobile for Kelli Bright, a beautiful young paraplegic woman who was injured in a car accident in 2009. This sophisticated equipment allows her to exercise and gain muscle strength. Kelli was recently seen driving a car!

I asked Angel what the Exchange club does for her. Her answer: “Exchange is my personal vehicle for helping me to become the best version of myself in order to serve God and my community.” She joined the Hilton Head Island Fastrackers Toastmasters Club about three years ago in order to improve her skills and confidence when speaking and making presentations about Exchange. On June 6, 2015, Angel Flewelling will be sworn in as the District President of the National Exchange for the State of South Carolina. This leadership position will allow Angel to use her strength and courage to impact so many others with her life-changing work. 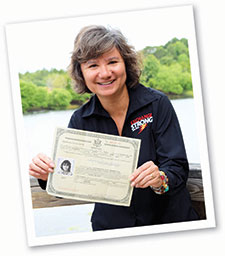 Words to Live By:  “Be ashamed to die until you have won some victory for humanity” -Horace Mann

A Hilton Head/ Bluffton Chapter of the Exchange Club will soon be formed. The first meeting is planned for July at the Bluffton Fire Department. Call Angel Flewelling at 843-525-0102 for details.