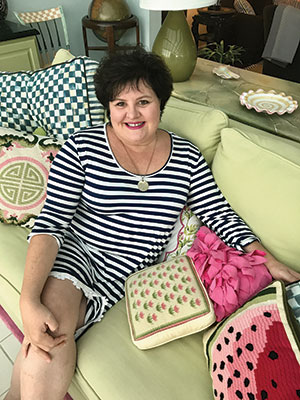 "Somewhere along the way, we must learn that there is nothing greater than to do something for others."
— Martin Luther King Jr.

Last year about this time, I was one broken human being. On New Year’s Eve, I gladly kissed 2016 goodbye. Like most Americans, who want their mysteries solved in an hour and pains vanished with a pill, I wanted the ruins of my life to magically be restored with the stroke of midnight. But, my fairy godmother did not show up, and 2017 was worse than 2016. However, for this Christmas season, I want to share some of the most amazing moments, which came to me in the form of people showing up exactly when they were needed the most.

First of all, I have to thank my staff member, Laurie McCall, for completely showing up for me on the worst day of my life. Laurie had a front row seat to the moment hope left my body. She drove home to Bluffton, packed her suitcase and stayed with me for two days and nights. Sometimes you just shouldn’t be alone, and she instinctively knew this was one of those times. She and her family sacrificed for her to be with me. She helped me process what happened. She told me stories about her vulnerability and times when she was hurt, lost and broken. It was an act of deep compassion I will never forget.

One of the material casualties from the destruction of Hurricane Matthew was the Christmas décor stored in the attic. Every single holiday decoration was crushed to pieces, covered in debris and soaked with rain. Twenty-five years of ornaments, including both of my children’s “baby’s first Christmas” ornaments and all the sweet little hand-made things they had brought home from school over the years, were simply a pile of trash. Two magical things happened:

1. Mary Gwen Boyette, a Facebook friend who I had maybe met once, invited me to come to her attic and “shop!” She had already put up her decorations and said she needed to downsize her collection. When I arrived, there was a couple already in the attic “shopping.” They, too, had lost their home, and Christmas decorations, in the storm. Mary Gwen’s attic was large, the kind that has a door, not a hide-away staircase. It was bubbling with Christmas joy—beautiful garlands, silk florals, small, themed trees and ornaments galore. She opened her attic to us that day, but more than that, she opened her heart. She will never fully know the difference she made in my life, and I look forward again to putting out my beautiful decorations she gave me. The Lesson: Authentic generosity is the main ingredient of Christmas. I was blessed by an angel right here on earth, and she has inspired me to do the same every chance I get.

2. After getting the Christmas goodies from Mary Gwen, I still had a problem. I had no holiday spirit. I was emotionally checked-out and had moved three times in less than 6-weeks. My friend Stephanie Rawlinson, from Florence, SC, and her daughter, Mary Catherine, arrived on a Friday night, and when they left on Sunday, my rental house was filled with holiday décor, both inside and out. Stephanie just took control, dragged me along and filled my temporary home with the beautiful sights and sounds of Christmas. It was an act of love at a time when I felt love had abandoned me. The lesson: Sometimes just showing up is more important than anything else. In fact, showing up is everything.

There are others who showed up with offerings of concern, care and compassion, as well. Maureen Houston gave me a barely-used, king-size Tempur-Pedic mattress. One of her friends, Holly Neal, who doesn’t even know me, gave me a wonderful sofa. And another friend, Andy Ballew, let me store them in his garage for over a year. And Conie and Joey Lankowski hauled the sofa and mattress to the garage for me. Charles Sampson made sure I was OK on a weekly basis. Sue and Mark Groesbeck opened their home to me, as did Janis Farr and Ken Farr. Jay Ramowski made me laugh a lot even through tears. My mother cared for my dogs in her home for four months. Marcus Mullis took me sailing often to escape and was a wonderful handyman. When he was lying on the floor with his head under the dryer, he said, “I like doing this kind of stuff for people.”

Just two weeks ago, a huge surprise showed up. Mrs. Iva Welton gifted me a baby-grand piano. The conversation I had with Iva was a lesson in itself. When she told me she wanted to give me the piano, I was speechless and moved to tears. I began to stammer and tell her it was too much, and she asked me poignantly, “Elizabeth, don’t you think you deserve it?” I’m still unsure if I deserve it, but she sure has made me think, and unbeknownst to her, she taught me receiving is as important as giving. She was thrilled I wanted the piano. It made her happy to give it to me, and I play it every day, which makes me happy, too.

All of these people, and so many more, were my life preservers when my boat was sinking. They scooped me up and rained compassion down on me and didn’t expect anything in return. Not. One. Thing. It humbled me to the core to be the recipient of such unconditional love, giving and grace. Humbleness is perhaps the hardest, and most profound, lesson to ever learn.

I finally understand Dickens’ words fully. From the bottom of my heart, thank you to all who made my dark, light; my despair, hope and my worst of times, the best of times. 2017 changed me forever, but because of so many who showed up, my spirit remains whole.
Peace on Earth and Joy to the World!