Hissy Fit - December 2020 - Save the Children... before they all become jackasses

...because everyone needs one every once in awhile 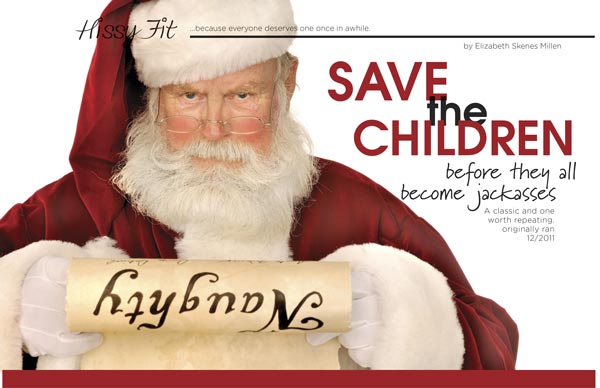 December 2020 Issue
by Elizabeth Skenes Millen
A classic and one worth repeating. originally ran 12/2011

Children are to be seen and not heard.
I can’t tell you how many times I heard that from my father when I was growing up.
I really never bought into it, but you can bet I immediately
shrank into the woodwork when he said it.
I knew, in no uncertain terms, that he meant to be quiet and behave,
and that meant now!
I also knew that if I didn’t, I would be the one on the losing end.

I had the pleasure of going to church with my friends in Florence, S.C. It was a beautiful Episcopal church built in 1864 with a conservative, formal service laced with all the pomp and circumstance. However, the scenery across the isle from me was far from pretty.

Enter a very nice-looking family; the mother, father and two little girls dressed in monogrammed matching “sister” dresses. They looked adorable until the little one’s head spun around a full 360˚. That’s when I reached for my pew seatbelt—you know the one that restrains judgment on others—and settled in for the show. I don’t like horror shows, but this one unfolded right before my eyes.

The first thing that caught my eye was the little girl crawling up under the pew. As we all know, the Episcopalians have kneeling benches and this little girl, who I would guess around age 5, was under, over and through it, back and forth, up and down. Interestingly enough, I observed that she did not go down near her father. She relentlessly wound around and between her mother’s legs like a cat that hadn’t eaten in two days.

Each time, when her mother attempted to grab her, she would go limp like a piece of well-done spaghetti tied to an anchor. When her mother finally got a successful grab, the child hit her and went and stood in the middle of the center isle of this enchanting sanctuary, complete with her hands crossed and a big frown on her face. Did someone write this script? This was classic, bad child movie antics.

At first the mother ignored her, then she grabbed her and pulled her back into the pew, where the small child continued to wreak very large havoc. I began to see a transformation in the faces of the players. They were visibly melting. The finely appointed apparel could no longer stave off the misery that dwelled within. The mother’s face revealed weariness and hopelessness; I actually saw one of her hairs turn gray right there on Sunday morning.

The saga continued but for a moment things settled to a calm. That’s when the older sister, around age 8, reached across her mother and punched the little hellion. Now it wasn’t enough that these two rug rats were armed with a barrage of toys to keep them occupied, happy and stimulated during church, because we all know that just telling them to do so isn’t going to work. (Wait a minute, why not? It worked for my parents.)  Anywho, the toys weren’t near as interesting as having Mommy’s undivided attention the entire time.

Now, may I remind you, these are the same children come Christmas morning, that will be lavished with more toys, more monogrammed dresses, more gifts and more rewards and will never understand the value of a lump of coal. No, “Little Susie” who is crying out for boundaries from her parents through her horrific behavior will not receive any consequences for Christmas this year, even though they are on the top of her list.

Please reinstate the naughty and nice list. I know some may feel it is politically incorrect and may possibly even damage fragile self-esteems, but I can assure you that politics and raising good children having nothing to do with each other. In fact, if the naughty and nice list had been reinstated sooner, we may not be experiencing the bad behavior we see way too often in governmental leadership.
Also, please give parents back their power and will to discipline their children. Remind them of when Pinocchio went away to the Land of Toys and how all the children there turned into jackasses. Pinocchio was scared. He did not want to live without boundaries and responsibilities.
And Santa, I know that you have been so generous, but by giving the children so much, you are taking away their desire to succeed and their feelings of accomplishment. Please remember we all need to have purpose, and earning things and working hard for something is a gift we all need, too.