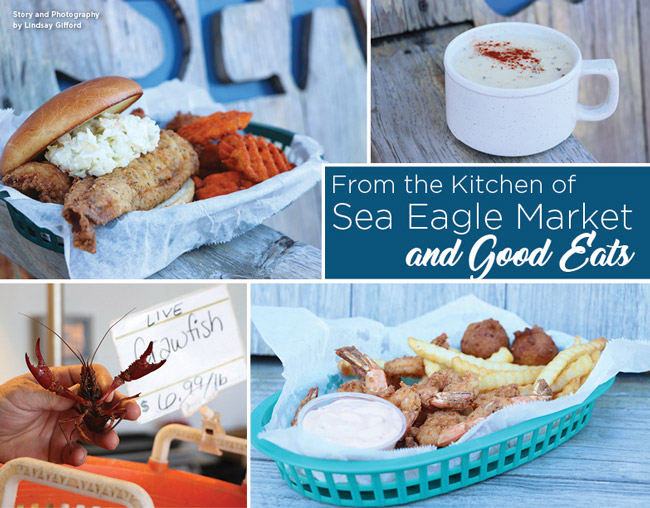 It’s a rare opportunity when you can corner Captain Craig Reaves for a long talk about his family’s business...and even rarer when you get to eat sweet, succulent, fresh SC, wild-caught shrimp at nine in the morning. I do it all for you Pink readers, all for you!

Keepin’ it in the Family
Meet Craig and Jana Reaves, the “captains” behind Sea Eagle Market. The Reaves family knows seafood. It all began in Holden Beach, NC, with Craig’s parents, Laten and Alice. They started what would become a life long passion for the seafood industry in 1970, when the shrimping business was thriving. Born into it, Craig and his siblings inherited the devotion. “It was a humble beginning, we always worked as a family whether it was on the boat, hulling shrimp, or working at the restaurant,” said Craig.

Jana, Craig’s wife, came by it a little less naturally, but it didn’t take long. She and Craig met when she worked at the family restaurant, and the rest is history. In fact, Jana was a huge proponent in creating their wholesale business, often making statewide trips in a day to deliver seafood.
The entire Reaves family uprooted and moved to Beaufort, SC, for it’s central location, and they’ve thrived ever since. While Craig doesn’t get much time on the water anymore, his brother runs the trawler, “Palmetto Pride.” And, they’re passing along the love of the industry by involving their children in the business. Melena and C.J., along with his wife Kim, help run day-to-day operations, and their younger children Molleigh and Samuel pull a few tours of duty, as well.

Good Eats
Sea Eagle Market opened up “Good Eats” restaurant after moving to a new location on Boundary Street. Craig saw the writing on the wall when their previous market location was right in the middle of the long-term revitalization project on Boundary Street. So, they secured their current location, which is just on the other side of the street, offering more space and convenience. With an abundance of space, the Reaves family decided it was the perfect opportunity to cook up some of their favorite recipes with the Lowcountry.

The Bait
If you’ve eaten seafood in the Lowcountry, you’ve likely enjoyed some of Sea Eagle’s fare. They provide many local restaurants with fresh, premium seafood, so it made sense to serve it up with their own family secrets. The menu is overflowing with freshly caught seafood in nearly every style you can imagine, but their flavor profile leans toward “Calabash”—simple, traditional, lightly-breaded and fried.  In the fresh seafood industry seasons matter and if you’re a soft-shell crab fan, you’re in luck! Soft-shell, while offered year round, just came into season and there’s nothing like the delicacy of fresh, soft shell crab. Other favorites on the menu include the calamari appetizer, shrimp basket (which I can vouch for!), Palmetto Pride (named after his brother’s boat) and great po’ boys— all served fresh and fast by a friendly welcoming staff. .

The Secret Sauce
Captain Craig has a few secrets up his sleeve, one being his delectable “Captain Craig Sauce.” He says it came to him in a dream. He woke up, wrote it down, and it’s been tempting taste buds ever sense. A delicious seafood take on yum, yum sauce and rémoulade combined, this sauce is wondrous.

Let’s Party
Sea Eagle Market isn’t just landlocked. They can often be found touting their community support at local festivals, featuring custom menus for each one. They are best known for their fare at the annual Beaufort Shrimp Festival, where the line for Sea Eagle Good Eats grows exponentially.
They also offer a wide variety of catering. In true southern fashion, Craig says, “We offer everything from fatback to caviar.” This includes our regions staples of Lowcountry boil, BBQ, oyster roasts, delicious Southern cuisine. When Sea Eagle’s on site, you know you’re in for good eating, because let’s face it, there are those people who don’t know what they’re missing out on when it comes to seafood.

The Community Supported Fishery
Sea Eagle Market’s Community Supported Fishery (CSF) program is in its fourth season, and there’s nothing else like it around. So, what exactly is it? Sea Eagle Market teams up with local fishermen to bring you the best of the best—freshly caught, premium local seafood—to your family’s table. The program is based on seasons and membership levels, which coincide with the size of your family. Each week you pick up your “share” at one of four Beaufort County drop off locations—Beaufort, Hilton Head, Port Royal, or Bluffton. Your share contains at least two different types of seafood and recipes. It’s a great way to expand your palate and learn to enjoy various types of seafood, all while taking a vested interest in an industry that is vital to your community.