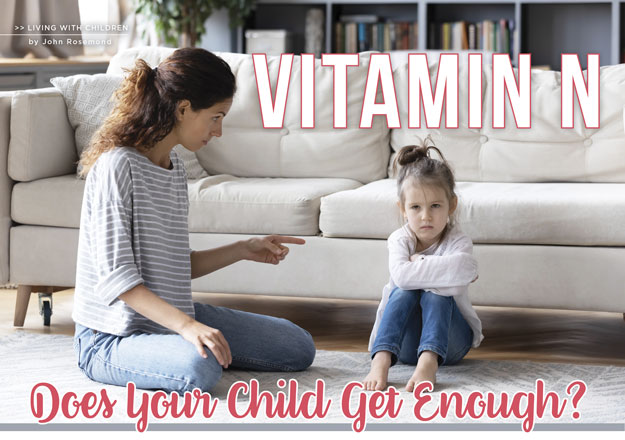 "Living With Children" - August 2020 Issue
Vitamin N: Does Your Child Get Enough?
by John Rosemond

In 1972, a Stanford University psychologist conducted a study in which young children, individually, were offered either a small but immediate reward (a marshmallow or a pretzel) or a doubled reward if they were able to wait for fifteen minutes. In follow-up studies, researchers found that children who were able to postpone gratification experienced better life outcomes as measured by such things as SAT scores, academic achievement, and body mass index.

I have long maintained that well-done research in the so-called social sciences does nothing but confirm common sense, and it certainly seems commonsensical that impulsivity and difficulty delaying gratification have a negative impact on life outcomes. The Stanford Marshmallow Experiment, as it is known, bears significantly on childrearing attitudes and approaches. Simply, teaching a naturally impulse-driven child to exercise restraint greatly increases the child’s chances of success.

In previous columns I have extolled the parenting virtues of “Vitamin N,” referring to the two-letter word (No) that the mental health community began demonizing in the late 1960s, claiming it induced all manner of psychological problems. Supposedly, said vitamin was part and parcel of “shame-based” parenting (which refers to childrearing that activates a child’s conscience).  Even today, despite commonsense and a body of research akin to the Stanford study, I continue to hear of parents and preschools that adhere to a “no no” policy.

I have been so bold and psychologically incorrect to say that children should hear “no” at least five times more than they hear “yes.”

That proportion approximates what they are going to experience post-emancipation as they learn to navigate real world contingencies. The earlier in life a person adjusts his expectations to reality, the better.

Because children are impulsive and instant gratification oriented by nature (as opposed to those traits being the result of chemical imbalances and other pseudo-scientific fictions), learning restraint involves psychic pain, which children express in tantrums and various forms of petulance. Teaching restraint, therefore, requires that parents also be able to tolerate pain. Having raised two children and assisted in the raising of seven grands, I can attest that there are few things more painful to endure than the prolonged shrieking of a young child.

And so, it is ironic to note that those parents who are better able to restrain the impulse to end said shrieking by giving in are more likely to raise children who can tolerate delay of gratification and achieve life success. Endowing restraint requires restraint. Teaching endurance requires endurance.
Take it from an expert on the subject, when all is said and done, life success is not a matter of money, prestige, honors, and the like. It is a matter of personal contentment, a sense of serenity that no outside influence can disturb.

Contentment is life’s brass ring. Enabling a child to eventually, much later in life, grasp it requires daily doses of Vitamin N, the greatest and most painful of gifts.