Get Your Toddler or Preschooler to Cooperate 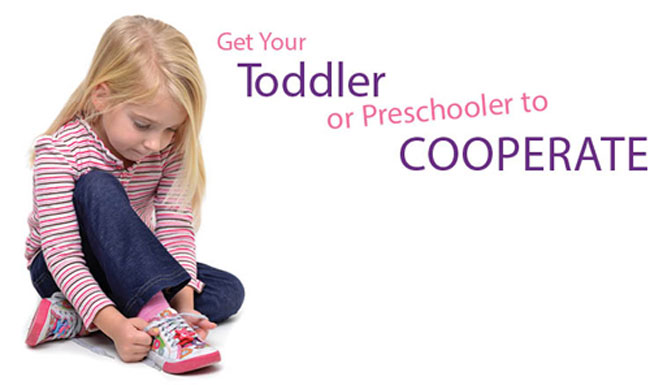 It's no secret that children crave independence—from picking an outfit to choosing a snack—so convincing yourself- appointed ™big kid∫ to cooperate can be a big challenge. Young children are driven by emotion and they live in the moment. Simply explaining what you want doesn't work! However by using a variety of child-friendly methods, you can bring about some happy cooperation.

Allowing your little one to select from several options will give her a feeling of empowerment, increasing the chances she’ll select one and be happy with her decision.

For example, lay out several parent-approved outfits in the morning and have her choose her favorite. Instead of telling your little one to brush her teeth and put on her pajamas, ASK which one she’d rather do first. Instead of instructing him to get in the car, ask if he’d rather hop or dance his way there.

Kids see life as one big game, so take advantage of that! Nearly any task can be turned into a game with little effort. Some games can be a one-time fix, while others can become part of your regular routine.

Instead of the standard “too-serious” parent instructions (that often lead to fussing and tantrums), reword your request in a playful manner.

Don’t command, “Pick up your toys and put them in the box.” Instead, try, “I bet I can pick up all the blue cars before you pick up the red cars!” Instead of saying, “Get dressed now,” make it fun: “Are you fast? Can you finish getting dressed before the timer rings?”

By transforming a mundane task into a game, you’re guaranteed to pique your child’s interest and have fun in the process!

Capitalize on your toddler’s vivid imagination as a way to thwart negative emotions. Pretend to find a trail of caterpillars on the way to the store, hop to the car like a bunny or imagine a carrot gives you magic powers as you eat it.

Kids love to pretend and by entering your child’s world and playing along you can prevent daily skirmishes over chores.

Make bedtime more exciting with a magical talking toothbrush, or “watch” the toys march in a parade to the toy box during clean up time. Open your mind to the endless possibilities and you’ll discover that almost any event can be sweetened with a little imagination.

Even if you can’t carry a tune, a bit of music can get your child moving along with you. Wash your child up to, “This is the way we wash our hands, wash our hands...” Even humming familiar melodies will lift the mood during a yawn-inducing task.

It can be a lifesaver for parents to create a particular song to be used as a cue to certain tasks—such as a “clean up song” to belt out when the toys are picked up and put away (try it in an opera voice!). The joy singing spreads is contagious; don’t be surprised if your spirits are also lifted during a sing-along!

Tales can be used to teach a lesson, ward off boredom or keep your child focused on the task at hand. Share a story with your little one before a big event to let her know what’s about to happen and to prevent any fussing during the event. Tell a tale about a girl who says “please” and “thank you” at her grandparent’s house for dinner and emphasize how proud this makes grandma and grandpa. This is in preparation for an actual visit, of course!

Create a tale about a puppy that goes to the doctor for a checkup, a Tyrannosaurus Rex who visits the dentist, or a penguin’s first day at daycare. Use the story format to teach important lessons about sharing, being kind, being patient or any other life skill you’re attempting to pass on to your child.

Not only does laughter reduce stress, lower blood pressure and boost your immune system, it also makes you feel happy, encourages your child to cooperate with you and ends fussy moods.

Kids don’t require a scripted comedy show for entertainment; any light-hearted banter will do the job. Physical humor, such as pretending to fall, a silly face, exaggerated speech or funny accents, often elicits peals of laughter.

Being silly, like putting your child’s sock on his hand instead of his foot, or putting his shirt over your head instead of his, will make him giggle and give you the cooperation you desire. Plus, acting silly for your child’s benefit will cheer you up as well.

Once you’ve discovered the ease and joy of these many ways to engage your child’s cooperation you can avoid the commands that often bring resistance. You’ll find your days are filled with a bit more happiness and peacefulness. In addition, you’ll be building a positive foundation for the relationship between you for years to come.