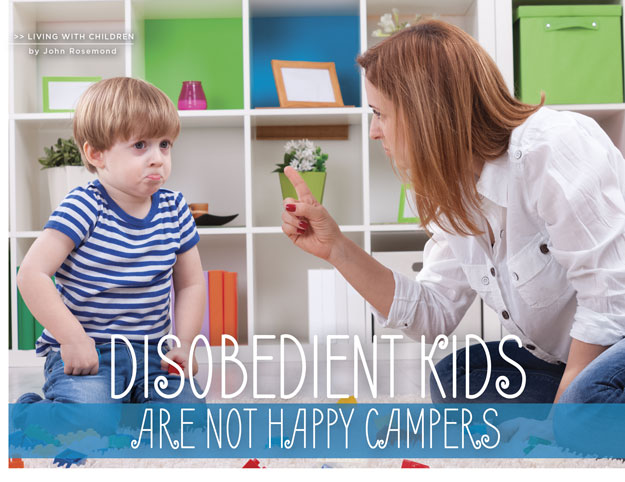 The myth of the first three years has it that whatever habits, traits, dysfunctions and so on that a child develops during this admittedly formative period are going to stay with him for life. That is not necessarily so. For example, Romanian orphans who had suffered severe emotional and physical neglect during infancy and toddlerhood recovered fully after being placed with American families. When put in play groups with American-born kids who were living with biological parents, they could not be identified reliably. The adoption-babblers have a difficult time explaining that, by the way.

Nonetheless, the third birthday is a parenting “hump” of sorts. Pre-1960s parents understood that the so-called “terrible twos” were just that: to wit, an 18-month developmental period (roughly between 18 and 36 months) marked by tantrums, defiance, violent outbursts and other anti-social behaviors. During this same period, it is essential that effective disciplinary precedents be set such that the terrible twos do not become the terrifying threes, frightful fours, fearsome fives, shocking sixes and so on (the nauseating nineteens?).

Behavior problems not resolved by the third birthday (or thereabouts) are going to be increasingly challenging for both parents and child. The parents are now behind the curve concerning the discipline of the child, and the further behind the curve they fall, the more difficult it will be for them to establish their authority. For the child, the further and faster the proverbial snowball of his misbehavior rolls downhill, the more havoc it plays with his emotional health. Good research confirms what common sense verifies: Disobedient kids are not happy campers.

Parents who come to me for help saying, “My kid is driving me crazy” want me to fix the problem for their benefit, to prevent them further emotional toll. But the emotional toll of the problem is being visited primarily upon the child. He’s being denied the right to a happy childhood by parents who love him deeply but don’t understand that—to employ a paraphrase—children do not thrive on love alone. Children need authority. They benefit greatly from having to accept that what their parents tell them to do, they must do, not because of reward or punishment, but simply because the Big People say so.

“Does that mean, John,” a mother recently asked, “that I shouldn’t give my teenager reasons for my decisions and instructions?”

A child’s age does not determine when it’s time for parents to begin explaining themselves. The prerequisite to explanation is obedience. You cannot explain a child into obedience, but once obedience has taken root and is flourishing, you can venture the occasional explanation. I say occasional because obedient children do not generally ask for explanations. They are content without them; besides, they’re usually able to figure them out on their own.

A parent’s love should be BIG and unconditional, but if it isn’t balanced with equally BIG, unambiguous authority, it’s most accurately termed enabling codependence. Likewise, if authority is BIG but love is weak and small, authority isn’t authority at all; it’s abuse of one form or another.

The “trick” of this is letting the monster-in-the-making know, early on, when the monster first makes its appearance, that he will not be allowed to let his dark side rule either himself, or the people he lives with. The formula can be expressed this simply: The child NEVER gets anything even close to what he wants when he misbehaves; rather, when he lets his monster off the leash, he loses things he doesn’t want to lose for memorable stretches of time. A child’s covetous nature can be used to everyone’s advantage.

Some children get it quickly. Others, not so much. Which is why a sense of humor always helps.