Savannah artist Ted Scypinski is known for his lifelike watercolors and oil paintings depicting imagery of historic Savannah, maritime, coastal scenery, and portrayals that make us nostalgic for simpler times. Whether commissioned, or inspired by his own imagination, Scypinski transports the viewer to different times and places in every image and brush stroke.
Ted showed his artistic ability at an early age. "My grandmother cleaned offices in a building in Manhattan and would bring home scraps of paper and bits of pencils that she knew I could make good use of." His technique developed through his career in mechanical engineering, where technical illustrations contributed to the execution of fine art watercolors and oils. Interest in the operating mechanics of things led to a profession in the engineering field. Formal schooling in mechanical drafting and machine design enabled skills which required exactness for the development of two-dimensional engineering drawings. Technical illustrating pushed that exactness to the third dimension. While all of this experience was being acquired in a vocation of applied art, an avocation in fine art was emerging. By trial and error, other techniques that make up successful paintings were mastered. With no formal art training, Ted is self-taught in the ways of composition, unity, balance, color, value and contrast. 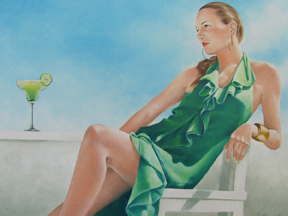 Starting with oils in 1963, Ted painted in that medium until switching to watercolor ten years later. He painted exclusively with watercolor until 2003, when he was lured back to oils. "With the range of subject matter I wanted to paint, watercolor could not provide the mood or drama for all of it," Ted explained. He now paints in both mediums, and being retired from his first profession, he is firmly set in his second. "I have been fortunate enough to produce paintings through the years for the public, who have admired and acquired my work so that I could be encouraged to make my avocation a vocation."

Watercolor is the medium of choice and in its purest form, utilizing only transparent pigments and fine paper. He does not use masking films or gouache, which he considers unnecessary, believing they inhibit the watercolor's luminosity. White is also never used, what appears white in his paintings is the paper itself. One of the most important aspects of his painting process is keeping his palette and water as clean as possible. This he views to be paramount when depending on the paper to be the source of light.

Ted's work, part of private, public and corporate collections throughout the world, has been accepted by numerous juried competitions and received awards in six states. He and his wife Joanne reside within Savannah's historic district. Now retired from engineering, his time is devoted entirely to the arts.

To see more of Ted's work, view his Web site at www.tedscypinski.com. Also, his studio/gallery can be visited by appointment. Please call 912.308.1218.