A Burning Desire to Make a Difference 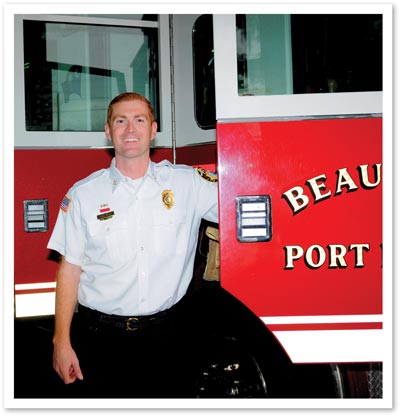 Ross Vezin is a tall, lanky redhead with a big smile and a firm handshake. He greeted me wearing a crisp, ironed uniform, indicating he’s a Captain with the City of Beaufort and Town of Port Royal Fire Departments. He looks a little young to have already attained this rank, but he admits to being 30, has over 10 years of experience with the department, and holds a Master’s degree. He is definitely a young man with lots to give to the community and does he ever deliver!

Ross chose a career in firefighting after his best friend’s father, Captain Jim Dillon of Miramar (Florida) Fire and Rescue was killed in the line of duty in 2006. Dillon’s role model as a selfless public servant of the community inspired Ross to attend the Fire Academy in Florida. After graduation, Ross sent out applications all over the Southeast, and the City of Beaufort invited him for a physical agility test and interview. A few days later they offered him the job, and Ross moved and made Beaufort his hometown.

He loves his job, now as Training/Education Officer for the Beaufort and Port Royal Fire Departments, because he works to improve the quality of emergency response for the two areas. He supervises the training and evaluation of about 80 men and women, and works to resolve the needs of both the firefighters and citizens in the area. Plus, he enjoys that there’s always something different every day. The hard part is that he often meets people on the worst day of their lives, and it’s difficult to witness their suffering.

All firefighters are EMT certified, and that’s why a fire truck is usually the first responder to a 911 call. When EMT and ambulances arrive, they assist any way they can. They handle everything from fires raging after a lightning strike, to an old man stuck in pluff mud, to changing the batteries in a smoke detector for lonely seniors. “I try to always say ‘Hello, How are you doing?’ to try to cheer people up, even in difficult situations,” he says.

When he’s not busy rescuing members of the community, Ross is busy serving Beaufort via volunteerism. He is involved with many local charities and civic organizations. He attended Leadership Beaufort and is now the program chairman for the Leadership Beaufort Alumni Association. He is active in the OneBlood Beaufort Community blood drive and encourages others to volunteer. He is a regional volunteer for the Make-A-Wish Foundation, helping grant wishes to as many as 10 children a year in the Lowcountry area.

The two organizations closest to his heart also involve children. Working with the Medical University of South Carolina’s Burned Children Fund, he raises funds throughout the year to support Camp Can Do located outside of Kiawah Island. Ross is also a counselor at the camp, serving children ages 6-17, all who have experienced a serious burn injury. His counselor duties range from changing wound dressings to supervising amusement park visits to fishing expeditions, and Ross loves every minute of it.

He is also involved with CAPA, the Child Abuse Prevention Abuse Association of Beaufort County. Last year he performed as a dance partner in the organization’s annual “Dancing with Our Stars” event, which raised more than $115,000 for the CAPA shelter. This Christmas, Ross is planning a magical event for the children at the shelter. In a few weeks, while the kids are at school, firemen from his unit will come and decorate the home, including lights and a Christmas tree with more than 2,500 apple ornaments that carry the names of all of the children who have passed through the shelter. “It’s a big surprise for the children,” Ross says, “and the squeals of amazement from the kids are great to hear.”
In addition, when school lets out for the holidays, the Beaufort/Port Royal Fire Departments will host a pizza party at the fire station. After the party, two rented limousines will transport the kids to James Island County Park to see the holiday lights. Christmas morning will be even more magical: The children at the CAPA shelter will be treated to a special home-cooked Christmas breakfast at the station with the firemen on duty.

Ross describes the events he’s got planned for the CAPA kids with both the maturity of a professional and the excitement and thrill of a kid who still loves Christmas. He’s a young man determined to make a difference in the lives of children who’ve had a rough start. “I love my job,” he says earnestly, and it shows.

Personal: Ross’ girlfriend is in the Marine Corps and flies F-18s. He actually put out a lightning strike fire at her house this summer while she was on deployment.

Family: One brother in Philadelphia, and parents in Jupiter, Florida, who have recently retired. His parents love Beaufort and are planning to spend the winter here, renting a house on the Old Point.

Just for Fun: Anything outside—particularly on the water—and working out. Firemen (and women) have to take physical fitness tests every six months. And yes, the girls have the same test as the guys!

Awards and Honors: Too many to fit in this box! He’s most proud of receiving the Lifesaving Award in 2015. He earned the honor for going into a burning house in Mossy Oaks and carrying out an elderly, disoriented man. “I have the best job in the world,” he beams.