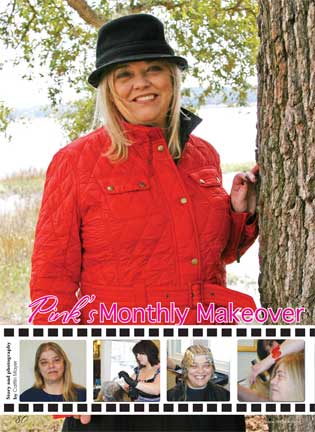 Meet Susan:
Throughout her lifetime, Susan Peck has dealt with quite a bit of hard luck, especially when it comes to her health. At the age of 52 she has had three strokes, congestive heart failure, and for the last ten years has been unable to work due to Fibromyalgia. "Staying home because of my disability used to feel like a vacation all the time, but after ten years it has gotten pretty boring," Susan said. "However, I try not to let it get me down, I have just learned to live with it." In addition to her health issues, Susan has also recently been through a divorce. To make matters worse, her 26 year-old son recently left the area and moved to New Jersey and her furry feline companion is sick too.

When our publisher, Elizabeth Millen, serendipitously met Susan, she had no idea of the struggles in Susan's life. What she saw was a big, warm smile and hair in need of a good color job. "I approached her friend and asked if she thought I would hurt Susan's feelings by asking her if she would like a makeover. She said she would love it, so I proceeded," said Elizabeth. In a world where there truly are no coincidences, needless to say, Susan was in desperate need of a pick-me-up, and was thrilled when offered the chance of a makeover.

The Hair:
We started with her hair. Susan has very fine, light hair that was a mixture of blonde and gray. Although fine hair is always a challenge, Shivhan Sims at Bayside Salon in Beaufort did a wonderful job of coloring and styling to make her hair look thicker, healthy and full. Shivhan began by coloring Susan's hair with Aveda color in light ash blonde to cover the gray, then added a few highlights to brighten up the look. She then cut more than four inches off the bottom and added layers around her face, finishing with Aveda Phomollient styling foam and a little bit of teasing for volume.

The Makeup:
Next it was time for the face. Because Susan spends a lot of time at home, she admits to rarely wearing makeup. After a quick analysis, Melissa Steward from Bayside Salon decided to keep Susan's look natural, yet still create a dramatic change from the ordinary. She began by trimming and waxing her eye brows, something Susan had never had done before. Using all Aveda products in natural earth tones, Melissa started with concealer in Hazelnut, followed by liquid foundation in Pebble, and then pressed powder in Honey. Finally a dust of loose powder in Translucent and it was on to the eyes. Melissa used a multitude of eye shadow colors including Aurora, Aura, Earthen, Opal and Riverbed. She then lined Susan's top eyelid with liner in Cacao, and finished with mascara in Black Forest. For Susan's lips Melissa began with lip color in Fossil, then lined them with liner in Agate, and finally added a little shimmer with a gloss in Golden Prism. Susan was thrilled with the way her new look came out. "I really wanted her to feel pretty, but to still feel like herself," said Melissa. A quick hug from Susan as she left showed Melissa that she had accomplished her goal.

The Clothes:
With Susan looking fabulous and feeling confident, we strolled down the sidewalks of beautiful historic Beaufort over to Baystreet Outfitters to pick out an outfit to go with her new look. Alice Burk assisted us in choosing a smart Flyweight International Quilt Jacket in red to complete Susan's new vivacious look. We then decided to add a classy Tilley Winter Hat in black. Susan adored the jacket and really took it all in having fun posing with the cute hat.

The Result:
After a playful photo shoot near the river, Susan was exhausted but completely satisfied with the experience. "I have been so excited about getting a makeover ever since I found out about it. Everything turned out great- I had a ball!"

Simply Stated:
Special thanks to Shivhan Sims and Melissa Steward from Bayside Salon. Bayside Salon is located at 310 Scott St. in Historic Downtown Beaufort. The salon services include spa packages, massage therapy, skin care treatments, makeup, waxing services, nail salon, hair and scalp treatments as well as hair color, cut and styling. For more information or to book an appointment call 843-522-9095. Thanks also to Alice Burk and the rest of the staff at Baystreet Outfitters, also located in downtown Beaufort at 815 Bay Street. For more information on Baystreet Outfitters or any of their products call 843-542-5250.