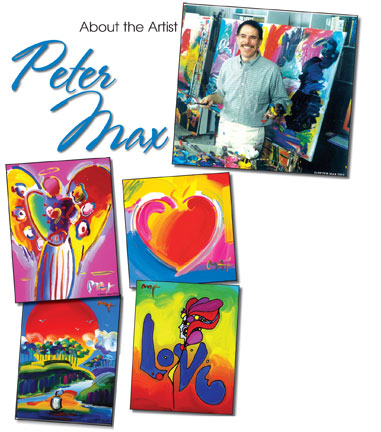 Pink Magazine is thrilled to feature an encore cover from one of the most famous living artists, Peter Max, a pop culture icon known around the world. In this cover piece, created specifically for Pink, notice the bridge is modeled after the McTeer Drawbridge, which connects Ladys Island to Downtown Beaufort. You will also see familiar local images, such as the dolphin and sailboats, intermingling with Max's well-known, psychedelic, iconic images reminiscent of the '60s.  His bold colors, uplifting images, and uncommon artistic diversity have touched almost every phase of American culture and inspired many generations.

His life's adventure began in Germany, and includes time spent in China, Tibet, Israel, and France, before he reached his ultimate destination, America. Max's rise to prominence as an American icon actually began in his childhood home in Shanghai-a pagoda house, where on one side there was a Buddhist monastery, and on the other, a Sikh temple. In the morning he would watch the Buddhist monks painting Chinese characters on vast sheets of rice paper with large bamboo brushes and at night, he would listen to the beautifully sung prayers of the Sikhs.

The splendor of the Orient, however, could not compete with a street vendor's offering-American comic books. Young Peter's imagination raced as he was carried away to fantasies of other worlds and into the future. There, in the ancient land of China, Peter Max became more immersed in contemporary American iconography than most children living in the U.S.A. at the time.

Eventually Peter landed in Paris, where he became captivated with the grand scale and painstaking perfection of Classical art and Realism, particularly the paintings of French artist, Bouguereau. But ultimately, it was New York City, with its growing pop art culture of fashions, automobiles, movie theaters, and the Empire State Building, that catapulted Peter into the future. Max began his formal art studies at the Art Students League in Manhattan under the tutelage of Frank Reilly, a realistic painter.

Just as Max felt the oncoming impact of the '60s underground Cultural Revolution, he also saw the print industry expanding with four-color web presses. To Peter, this print media explosion meant one thing-he could turn his original art works into posters and share them with the youth of America. Soon, Max's posters were hanging in college dorms all across America with several million sold in nine months. His posters were to the '60s what MTV was to the early '80s-radical, revolutionary, and in demand. Capturing the zeitgeist of the era, Max's art was often cited by journalists and art critics as the visual counterpart to the music of The Beatles. Like the Beatles, Max also made his TV debut on the Ed Sullivan Show. He appeared on the Tonight Show with Johnny Carson and made the cover of Life Magazine with an eight-page feature story. Max's art was so much in sync with the times, it was licensed by 72 corporations, and within a three-year period, generated more than $1 billion in retail sales.

Now through the end of August, be sure to stop by the Arts Center of Coastal Carolina to see Painting Peter Max, an art exhibition of 18 paintings by 5th grade students from Hilton Head Island Elementary School for the Creative Arts. The Arts Center provided a grant to see this "self-portrait Peter Max style" art project come to fruition.