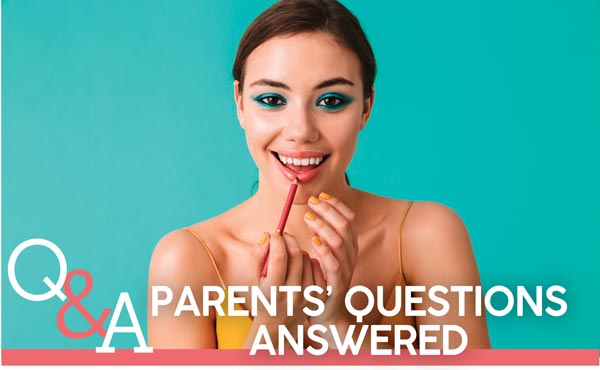 Q: Our 14-year-old daughter is a rising high school sophomore. We let her wear eyeliner this past year, but she is wearing entirely too much. She is well-adjusted (plays sports, good grades) but seems insecure to go out in public without her make-up. When we tell her she looks prettier without it, she becomes defensive. Should we lighten up or insist that she stop trying to look like Miley Cyrus?

A: Your daughter is at an age where peer approval is more important than just about anything else (certainly approval from you) and wearing makeup is a ticket to that approval. That’s unfortunate, but in childrearing as in every other area of life, it is sometimes necessary to make compromises. Parents should always keep in mind that one can win a battle and still lose the war.

So long as all is well otherwise, and it obviously is, I'd back off on the eyeliner issue. Sometimes, giving a child an inch, or even several, will prevent full-blown rebellion. Continue, however, to look for signs that she is on a slippery slope and be prepared to set some boundaries.

To further defuse this potentially explosive issue, I recommend that you arrange an appointment for your daughter with a beauty consultant who can teach her how to use makeup in a sparing, attractive manner.

Q: How can I explain to my kids, ages 6 and 9, that “fair” and “equally” are not the same. They complain constantly that I’m not fair. What they mean is I don’t treat them the same.

A: You’re yelling into a hurricane. Forget it. Below age 12 or 13, children cannot wrap their brains around the difference between these two concepts.

Treating children equally means treating them in the same fashion regardless of any measurable differences between them. Treating children fairly means treating them with consideration of those differences. Take bedtime as regards two siblings, ages 5 and 10. To treat them equally, one would send them to bed at the same time. To treat them fairly, one would let the older one stay up later. Obviously, the younger one wants to be treated equally, while the older one wants to be treated fairly.

The concept of meritocracy is germane to this discussion. Meritocracy means that privilege is conferred objectively. In the previous case, the objective measure is age, but it could also be talent, effort, or expertise. Children do not believe in meritocracy. A child believes—and the younger the child, the stronger the belief—in the “Me-tocracy.” To Ritchie, it is of no consequence that Frankie runs faster and therefore reached the ball first. Ritchie thinks it’s not fair that Frankie has the ball. But then Frankie thinks it’s unfair that because Ritchie made straight A’s through the entire school year, his parents are taking him to Dizzy World. Frankie slacked off during much of the school year. No Dizzy World for him.

Unfortunately, many adults these days seem as confused as children by the difference between fair and equal. That confusion is reflected in the nouveau practice of giving every child on a team an award.

“And the Most Well-Oiled Glove Award goes to Billy Bratnslob! Let’s give him a big hand! Good job Billy!”

Let’s not admit, much less let on to the kids, that one child on the team might be the best player. The problem is that the attempt to treat all children in a certain group equally isn’t fair at all. In this case, fair would be for adults to recognize that some children on the team did, in fact, make a greater contribution than others. But in these odd times, it is widely held that telling a child the truth might dim the glow of his or her supposed entitlement to self-esteem, and entitlement wins.

I am reminded of a story about a family Christmas attended by six grandchildren. Grandma and Grandpa gave the same toy bulldozer to each of the four male grandchildren. They did this, they said, to be “fair.” (Note the confusion of terms.) Nevertheless, within one hour of opening their identical presents wrapped identically, the boys were fighting over who got the best of the six identical bulldozers and whose identical bulldozer was whose and so on.

Q: When I discipline my 7-year-old daughter by, say, taking away a privilege because she disobeys, she sometimes yells, “I hate you!” Should I tolerate her disrespect or punish her for it?

A truly disrespectful remark may deserve punishment, but concerning a child who screams “I hate you!” at a parent, the parent should simply say, “You know, if I was you, I’d probably hate me too right now. That’s fine, but it’s obvious that you need a private moment, so you might want to consider going to your room to calm down. If you need help getting there, I will gladly provide it.” That is an example of what I call “parenting ju-jitsu.”