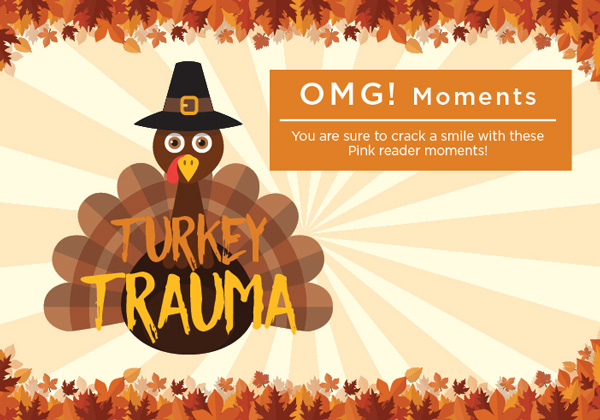 "One time at Thanksgiving Dinner with 15 guests, my seven-year-old grandson changed into his Sunday best and started telling jokes and singing—like real entertainment. His closing line was, “Thank you, thank you, I’ll be here all week!"

"While trying to teach my children a lesson in giving, I took them to help serve food at a homeless shelter. While inside, my van was broken into and our early Christmas shopping presents were stolen!"

"Growing up, my mom, sister and I arm wrestled for each Thanksgiving dinner turkey wing. Mom was so concerned, she started buying an extra wing to cook with the turkey in the oven so all three of us would be happy. She often left the turkey out all night to defrost. Early one Thanksgiving morning we discovered the third turkey wing had been ravished, with most of it gone. Seems our family cat, Bootsie, hankered for turkey wings, as well. So we were back to fighting over two wings and locked up the cat. The following year or so, my mother-in-law insisted on cooking Thanksgiving dinner. I hate cooking and gladly gave up the kitchen to her. When we got ready to eat, both wings were gone! She had used the meat in her gravy, throwing away the rest. I thought about dumpster diving and divorce!"

" Living in Michigan, we had our own sweet cherry tree. So, I made pies for Thanksgiving. Everyone commented on how beautiful they were until they ate a slice. I had forgotten to pit the cherries when I froze them from summertime picking!"

" I was so excited to make a rack of lamb for our dear friends. I prepped all day and was within 15 minutes of taking the lamb out of the oven. I decided to add water to the Pyrex dish to get gravy going and that’s when disaster struck! It shattered, killing our lamb dinner!"

" One year, my elderly mother decided to go Black Friday shopping with my sister and me. We always have a plan of action mapped out for the day. The first store did not open on time—so we went to Shoe Carnival. Between the three of us we bought 19 pairs of shoes, waiting in line over an hour to check out. We were ready to go, but Mom wouldn’t leave because they were having a prize drawing. We reluctantly waited 15 minutes. When the guy called out the number, a little elderly voice yelled out ‘That’s me!’ It was Mom…free shoes for a year!"

" On Black Friday I left a house full of people to go stand in line for coupons. Thinking I would return to my home of peace and quiet —nope—they were still there!"

" On Thanksgiving we invited our six neighbors to dine. While dishing up the food, I had to remove a casserole from the oven. Being rather short I had to stand on my tip toes to retrieve it. As I turned around the dish slipped off the pan and on to the floor. We brushed off the squash and served it!"

" The first time my husband deep-fried a turkey, his timing was off. The turkey burnt and was too tough to eat. It was a turkey-less Thanksgiving!"

"One Thanksgiving our daughter invited a friend who had a pot-bellied pig. She was a small pink pig who took her snout, knocking our dogs out of the way of their food, eating one kibble at a time. When we picked her up, she would squeal and act as if she were dying. It was a lot of fun!"

Up Next Month: Christmas/Office Party
Do you have a hilarious or embarassing Christmas or office party short story? We would love to hear it! Email us at This email address is being protected from spambots. You need JavaScript enabled to view it.