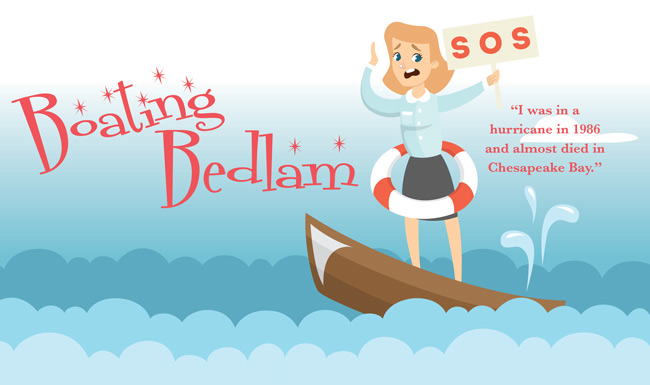 “My dad doesn't believe ladders belong on boats, and one day out on the sandbar we got caught in rough water with a storm approaching. The guys were helping boost us into the boat really quickly, and I gouged my knee severely on the propeller. Needless to say by the time we managed to get back to the landing, I was sporting a blood soaked bandana on my knee and pained expression after a rough ride in.”

“I was at the Hospice Care of the Lowcountry Yacht Hop in Harbour Town and walked into a boat’s bathroom, ripped my toenail off on the step and was bleeding all over the floor of this expensive yacht. The owner bandaged my toe and gave me a shot of tequila!”

“As a young teenager, I finally got invited to go to the lake with girls and boys. I also had my first two-piece bathing suit. The host girl had a small motorboat and water skis. I was pretty brave, agreeing to try water skiing for the first time. All started well—I got up out of the water for a second or two. Then the boat slowed, I fell backwards, but was afraid to let go of the rope. The girls on board were screaming and the boys cheering as I felt my wet bathing suit top around my neck! Then I let go and dove underwater to correct my wardrobe malfunction!”

“I was going sailing on Long Island and my cocker spaniel wanted to come along. I told him he couldn't, but he didn't take 'no' for an answer... he swam out to the boat. At least he's a good swimmer.”

“We were crusing along near our community dock, and I was ready to head back, so I dove in for one last dip and thought I would just climb up on one of the boats tied up to the dock. As soon as I hit the water I remembered they had warned me a nice sized gator had been seen under the dock several times. I rushed to the first boat to climb up...no ladder, next boat...ladder is locked, I finally made it up on the 4th one, and I was thoroughly freaked out and glad a gator hadn't eaten me.”

“I have many, many boat stories, but here’s the scariest one is:  We were at the mouth of the Merrimack River, Mass. and New Hampshire and a bad storm came up. My husband and I had no choice but to go into it.  We were caught between the breaking of the waves in front of it.  I got my life jacket on but could not get his on— just on one arm. I was told to go in the cabin. We finally made it, praying, and praying, and praying. Never again did we travel the Merrimack River.”

“We were on an Alaskan cruise and went to a lumberjack show. I was chosen from the audience to compete with another audience participant to do the “ax throwing” contest­—and I won—I hit the bullseye two out of three times. My husband and I also won the “Not so Newlywed Game” later, on the same cruise!”

“Canoeing the Chattahoochee River one time, our “boat” turned over due to bumping into a rock—(too much to drink). Thank goodness for our floating bags…”

“My family and I were out on the boat and a massive storm hit. My dad decided to drop us off at the landing and take the boat to a dock nearby. He threw me his keys as he took off, and I walked up the landing to realize I had to back a 25-ft. trailer out of our parking spot in rain so thick you could barely see the person next to you. 10 points later I was out!”

“My entire family went on a holiday cruise and our last night was New Years Eve. I had a little too much fun and when I put my bags outside the room, and I forgot to keep clothes out for the next day. So the next morning I woke up with absolutely nothing to wear and had to get off the boat with my boyfriend's boxers and my dad's undershirt. At least I left with a great story to tell.”

“I was on a cruise with my friend Cindy when I got Montezuma’s revenge, so she escorted me to the infirmary. In the exam room with the doctor, Cindy asked if what I had was contagious. Then the doctor replied, what does “contagious” mean? OMG! Someone get us outta here!”

“I was on a business trip with my husband. We went boating as part of an event the company was hosting.  I took a Dramamine so I wouldn’t get seasick. I fell asleep and slept the whole day.”

“I went on a week-long sailing trip, and my husband forgot my suitcase.  I had to wear his shorts and T-shirts for the entire trip.  I was pregnant; they fit perfectly!”

“I was in a hurricane in 1986 and almost died in Chesapeake Bay.”

Poll: Which would you prefer didn’t exist in the Lowcountry?