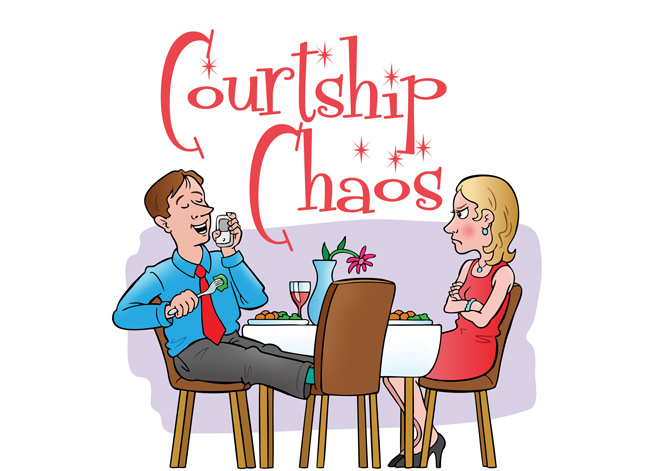 "Seeing as I didn’t drink much, and a great friend needed a date for his awards ceremony, and I wanted to wear my LBD, I said, yes. Short version: Two beers, a joint and a ride in a snow storm, was stressful as heck! Had a nice dinner at the ceremony and remember doing a shot. Next thing I know I’m sitting in the pitch black dark. I felt my way around and realized I was in a bathroom stall, found the exit, only to discover the dinner place empty and set for the next day. So, after being asleep on the toilet for three hours, I was locked in from the outside with no jacket or purse. Somehow, a gentleman from our hotel found me. He picked me up and took me back to my date, who thought I had been taken. So embarrassing. It was a long ride home.”

"A wrong date came to my door, who, as it turned out, should have been going next door."

"I’m a motorcycle chick. My husband and I never dated; we just got married! And we were married 33 years."

"When I was newly divorced, I went on a match.com date and truly forgot my debit card. When my date suggested we go “Dutch” I told him I forgot it. I know he thought I had done it on purpose."

"Back in the 1970s, when curly bushy hair styles were popular, I took up with this guy who had the most handsome hairstyle. One thing led to another and in an intimate moment, I discovered he was wearing a wig! Ugh. It was over!"

"I opened my mouth at an outdoor picnic and a grasshopper jumped in! Iwas too embarrassed to spit it out, so I swallowed it, and it kicked me all the way to my stomach!"

"First date, met at a café. He ordered a full meal and drink, then left me to pay for it all. And, after talking about his video games for two hours, he guilted me into driving him home because he didn't have a way home. Never saw him again."

"1960s at College: No one had asked me for the homecoming dance but all my dorm friends had dates. One of them said, “I know this guy; he doesn’t have a date.” So, she arranged it. I played “Scarlett O’Hara” all day long prepping my bouffant hairdo, heavy eye makeup and I rested. Ooh, I was so pretty! I saw many of my friends escorted out of the dorm with big beautiful corsages, then my “dream boat” showed up with a 20 cents plastic corsage. I was mortified. So, I begged out and left him standing in the parlor of the dance."

"I went on a first date with a co-worker who was a captain for an airline.  I was expecting serious and great conversation over dinner, but instead he had gotten BBQ all over his cheeks. I informed him, but instead of wiping it off, he started painting his face like a warrior. The waitress said, “Oh my!” He then said, “Think I need a napkin?” I about died. She also knew it was our first date. I was so embarrassed.
This is what we did to our friend who went on a blind date via a online dating site: We followed them to a bar without her knowing and sat at the bar and kept watching them. Then we told the bartender her name and asked him to keep calling out to her like she was a regular there. (Of course, she wasn’t.)  We did this to her at two locations!

"I managed a restaurant in Ohio and had a lunch date there one day with an old beau. We had a nice lunch, and as he was leaving, my new beau came in. They must have passed each other on the sidewalk. Well, my new beau was hungry. Our server, (who later became my new beau’s ex-brother-in-law) recommended he try the same lunch item my old beau had just ordered proclaiming, “It’s been a VERY popular menu item today; just like our boss!” (me)"

"I had a blind date in 1963 in California with Don Knotts (Barney Fife from TV)."

"The first date I ever brought home, my Mom insisted on taking pictures of us. As she clicked the camera she said, “Smile, this is for the Wanted Dead or Alive poster.” My date’s face turned as red as possible, and he became very quiet for the rest of the time we were there."

"My husband is five years older than me and when we first started dating, everyone at the bars thought I was the same age. They found out I was only 20 instead of 25. They told my husband he had robbed the cradle."

"On a second date, one time, I went on a boating trip with this guy who pulled ashore, where we were stranded for nine hours! He couldn’t understand why I was so upset."

"I opened the door and my date took one look at my jungle necklace (it was huge) and he didn’t talk to me all night. One and done."

Poll: Which do you think is most important to put first in your life?
53% Yourself
26% Your Children
21% Your Spouse/Significant Other

Up Next Month: Goals—Hit or Miss
Do you have a story about a time when you hit or missed a goal?
We would love to hear it! Email us at This email address is being protected from spambots. You need JavaScript enabled to view it.