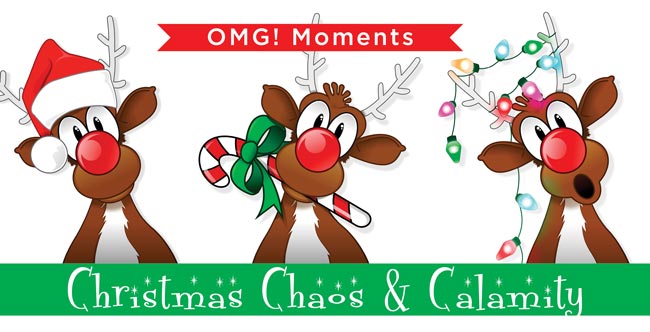 “The doctor I worked for and his wife were coming for a Christmas get-together, and I wanted everything to be perfect. I made two different dishes, covered them with foil, and placed them in the refrigerator in similar oven/fridge safe pans. Minutes before my guests arrived, I put one of the dishes in the oven to cook. When my boss walked in, he pointed out something was burning! I put the wrong dish in the oven; the congealed, strawberry pretzel salad was toast.”

“I gave the wrong present to my old boyfriend; it was supposed to go to my new boyfriend!”

“As children, we always enjoyed the outdoors and went hunting. My parents decided it was finally time to get my brother a nice buck knife (which he had experience handling) for Christmas. He opened the gift and when he replaced it in the thick leather sheath, it sliced all the way through and cut his hand open. Needless to say we ended up in the emergency room on Christmas morning.”

“On Christmas, my mom and brother loaded the trunk of the car with Christmas presents to come to my house. They went back inside to watch Wheel of Fortune, leaving the trunk open. Everything was stolen. Of course, days later, we found my sister’s new underdrawers on the roof of the house at the end of the road.”

“While we were decorating the Christmas tree, an ornament was lying on the floor; my mom sat on it and it popped and scared us to death.”

“My first year as a new bride, I cooked the turkey with the giblets in the bag… inside. I threw the turkey away and bought two Weight Watchers frozen dinners for our meal instead.”

“We had 24 guests one Christmas, the same Christmas my oven died with a turkey, ham and Lasagna in it!”

“My beautiful Christmas tree was all a glow on Christmas Eve, when CRASH! My sweet Bernese dog decided it was time climbing the tree!”

“I went to a sale and bought so much that when my friend and I were loading the trunk a woman walked by and said, ‘Lift with your legs, ladies!’”

“I was married for 15 years and always got the same cleaning or cooking tool for the house. Our last Christmas together, he got me two beautiful gowns and perfume. I trained him for his new wife! Ha!”

“Flashback to 1982 when I was 5-years-old and Cabbage Patch Dolls were the must-have Christmas item. On Christmas morning I tore through all the presents with my name on it. I ended up with a paper cabbage patch doll and a stroller. As I sat there, trying not to look disappointed, I spotted a box hidden under the tree. As I crept closer, my Grandma said, ‘Don’t touch that!’ and everyone burst out laughing. Too young to understand the joke, I got up and started rolling my paper cabbage patch doll around in my new toy stroller. My pitiful face humored everyone. They played with my emotions a few hours until Grandma FINALLY handed me the box; it was David, my long-awaited Cabbage Patch Doll!”

“One year my husband thought it would be funny to wrap up objects from around the house for me. Objects like DVDs we had already had, old, burned out candles, even the tape, scissors and wrapping paper tube.”

“One year Santa brought my brother a go-cart for Christmas. He cleverly finished putting it together in the house so it would be a big surprise in the morning. Getting it out of  the house was a totally different story...especially with an impatient young boy. Once it was finally maneuvered outside he promptly ran me into a tree scratching my face all up and cutting my ear. Thankfully, his driving skills have improved throughout the years.”

“I threw my ex-husband’s new pajamas, box and all, into the fireplace!”

“I made 80 homemade crab cakes for our open house and they all fell apart because of the humidity, but the guests ate them all!”

“One Christmas at age 10, I woke up with the Mumps…on both sides!”

“I was talking politics with my future in-laws and got attacked (verbally) and spent Christmas Eve in the guest room crying my eyes out.”

Who is your favorite movie Santa?
46% Edmund Gwenn from Miracle on 34th Street
30% Tim Allen from The Santa Clause
18% Santa Claus from Rudolph
6% Kris Kringle in Santa Claus is Coming to Town