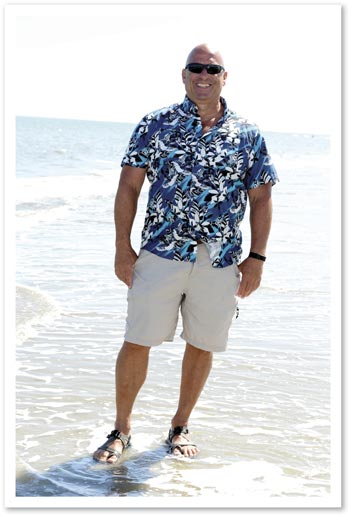 “You can discover more about a person in an hour of play than in a year of conversation.” – Plato

Ken Weisner has worn many hats in his more than 35 years on Hilton Head Island. From bartender to personal trainer to staffing specialist, Ken has never been afraid to take risks and try new things. Still, by the looks of his newest title, this might be one of the most intriguing reinventions yet: Chief Playmaker.

In 2017, Ken founded Beach Play Company of Hilton Head, specializing in beach parties with a purpose. Understanding that today’s consumers are looking for unique, one-of-a-kind experiences, Ken helps people connect with each other through play, creating unique memories that will last a lifetime.
For some gatherings, such as family reunions or wedding parties, the goal may simply be a day of fun at the beach. For this, Ken offers a long list of activities including fishing and crabbing, beach Olympics, water gun games, and scavenger hunts, just to name a few!

Other groups, such as corporate retreats or pre-season athletic teams, may have more specific goals in mind. In this case, Ken uses play to help participants communicate and work together more effectively, skills that employers and coaches are eager to generalize to the larger arena.

Sound like fun? You bet. But how exactly does one become a Chief Playmaker? For Ken, this unique role has been decades in the making, a product of his many experiences on Hilton Head Island.

Originally from Medford Lakes, New Jersey, Ken played soccer for Francis Marion University in Florence, SC. As a student, he bartended for the Holiday Inn, eventually joining the company full time and moving to Hilton Head. He has lived here ever since, working at such landmarks as Robbers Row, Quarterdeck, Crow’s Nest, and the Old Post Office. Even now, you can see him at the Crazy Crab in Harbour Town. Why? “I love the restaurant business,” Ken admits. “It’s in my blood.” Not surprising, considering many of his extended family are in the hotel and restaurant business in Atlantic City.

But that’s only the beginning. During his time on the island, Ken has owned a private gym, which specialized in personal training, gained training in team building, and most recently, discovered a talent for motivational speaking. The last piece of the puzzle fell into place when Ken joined a staffing agency, where he learned the importance of communication in the workplace. “I watched people with all this enthusiasm get fired because they didn’t receive the training or support they needed to succeed,” Ken recalls.

Separately, any one of these experiences could lead to a long and satisfying career. However, combine them, and you have something (or someone) special—an individual who understands what motivates people and has the resources to inspire and engage them, both physically and mentally.

So, what inspires the playmaker? Like everyone, Ken has had his share of ups and downs. Now 57, he has had two hip replacements and survived a divorce, but has come through it all with a deep commitment to faith and family. In addition to his mother and brother, who both live nearby in Bluffton, and his father who lives in Aiken, Ken has two daughters that are clearly his pride and joy. Jean, 27, is a Special Education Teacher in Clover, SC, and the mother of his first granddaughter. Daughter Kate, 23, is a Talent Acquisition Manager in Raleigh in charge of recruiting former college athletes like herself (A former island soccer coach and very involved parent, Ken coached both his girls when they were young). He confides that before his daughters were born, “It was all about me, all about my ego.” Now, he beams as he talks about their achievements. “Because I wasn’t able to finish college,” he said, “my biggest goal was for them to graduate.” They did that and more, both daughters funding their education with full soccer scholarships.

In 2008, Ken became active in St. Luke’s Church of Hilton Head, crediting his renewed faith for giving him a second chance at life. For the last six years, he has volunteered his time with the youth ministry there, a calling he clearly enjoys. “I relate much better with kids than adults,” he jokes. Recently Ken found a photograph in which he and two buddies proudly hold up the fish they’d just caught. In the two years since the photo was taken, one of those buddies has died and the other is paralyzed. It’s a sobering moment for Ken, one in which he realizes how lucky he is. “What makes me happy now is giving people a chance to have fun.”

A second act, filled with family, faith, and a passion to pass on the importance of play—now that’s the definition of a motivational man.

UP CLOSE:
One thing about Ken most people don't know: “I'm a really good cook. My kids and their friends say I can make dirt taste good.”
Ken’s advice to readers: “Trust God’s promises, serve others, and never, ever give up!”
How does Ken have fun?  Philly sports, photography, exercising, swimming, biking and walking.