Run for the Roses ~ A Faithful Spectator’s Mementos 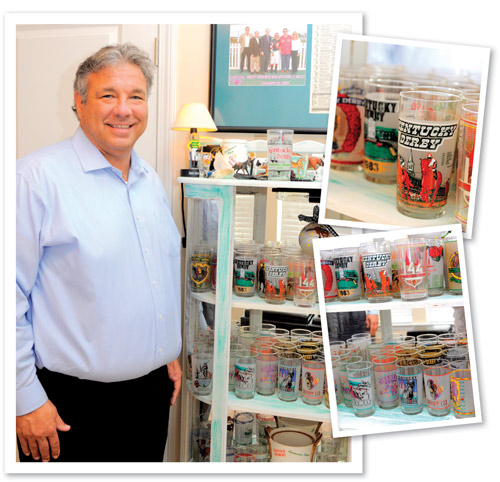 Often hailed “the most exciting two minutes in sports,” the Kentucky Derby has been exciting horse racing enthusiasts since 1875. A mere one-and-one-quarter miles of dirt track, Louisville, Kentucky’s legendary racetrack, Churchill Downs is gearing up for the 144th Run for the Roses on Saturday, May 5 at 6:34 p.m. Geared up is an understatement when describing local resident, Joseph Iaco’s anticipation. His devotion to following this time-honored, thoroughbred spectacle dates back to his youth and continues to this day.

Mr. Iaco’s love for the Derby is seen in an impressive 50-year collection of souvenir Mint Julep drinking glasses. Displayed in a devoted wooden case at his Bluffton home, Joe proudly explains their origin. “My father, Salvatore, gave me my first glass, …and since then, collecting them has become a bit of an obsession for me,” he smiles. In 1938, Churchill Downs noticed some missing water glasses following the race. Apparently, spectators took them home as a memento of the day! A huge marketing opportunity was knocking on their door, and that following year, the commemorative Mint Julep glass tradition was born. Each is beautifully unique, displaying the current race day/month/year, as well as a chronological run-down of all former winners. The U.S. experienced a glass shortage during WWII, so from 1941-44, the Derby glasses were made of a brittle plastic substance called bakelite. Some of these unique keepsakes currently run upwards of $1000 on ebay and other auction sources. Quite a find, indeed! Joe’s collection begins with the 1960 Mint Julep glass, when the winning horse, Venetian Way was crowned victorious.

Joe’s wife, Joanie, loves to shop, and antiquing is one of her favorite pastimes. It has become somewhat of a game for her and Joe to be on the continual lookout for earlier julep glasses. Amazing to note, nearly 120,000 Mint Juleps are served over the two-day period of Kentucky Derby weekend! That’s a lot of mint; 1,000 pounds of freshly harvested mint, to be exact.

Joe’s appreciation of the Kentucky Derby doesn’t stop at collectible glassware. He simply loves the competition! “We’ve always been a big race family,” he says. “My dad did his homework. He was smart and great at puzzles, which kept his brain sharp.” In those days, there was no Internet providing up-to-the-minute data, so reliance was made on newspaper information for determining a horses’ past race performances. Not an easy task. To win the $2 million current purse, a three-year old colt or gelding must first compete in a series of 35 races across the country. The top four are awarded points in each of these races, then the 20 horses with the greatest number of points secure a position at the Kentucky Derby’s starting gate!

“My bucket-list includes going to every racetrack in the country,” smiles Joe. At present, he is at 15 and counting!

The thoroughbred horse itself is an incredibly powerful athlete of tremendous conditioning. Their highest competitive honor is the Triple Crown—a figurative, sparkling crown to adorn these majestic animals—and the culmination of three won races. Those races are often referred to as jewels: No.1 jewel is The Kentucky Derby; followed by jewel No. 2: The Preakness Stakes at Pimlico Race Course, Baltimore, MD; and jewel No. 3: The Belmont Stakes at Belmont Park, Belmont, NY. Flowers, too, are associated with each race, and these adorn the winners…literally. The Kentucky Derby uses Roses, the Preakness, Black-Eyed Susans, and the Belmont, Carnations.

Joe Iaco gives the ultimate compliment to this regal and time-honored racing tradition, collecting mementos and stories of race days that will be handed down for generations.

Up Close:
• Member of local Italian Club for 7 years
• Former President of the Greater Bluffton Republican Club
• Employed by WTOC-TV as a Media/Marketing Consultant
• Has three beautiful children: Randi, Lucas and Britton, and four grandchildren
• He and Joanie love a Mint Julep and they're willing to share their favorite recipe:

Rub mint around the inside of the julep cup, expressing the essential oils. Toss mint into cup. Add remaining ingredients and top with crushed ice. Churn ingredients with a spoon to distribute and meld the flavors. Top with additional crushed ice. Garnish with a bundle of baby’s breath and fresh mint. Sprinkle with dehydrated edible blue cornflowers for an especially photogenic drink. This is hands down a refreshing ringer!