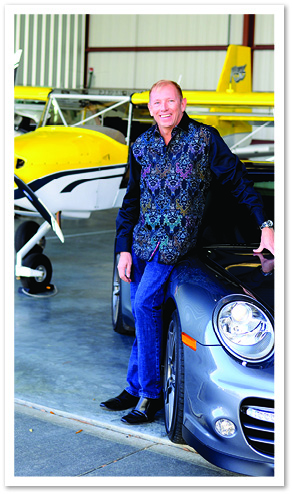 Grady is not one of the kindest men you’ll ever meet. He is THE kindest man you’ll ever meet. His friends agree. “Grady is one of the nicest, hardest-working, down-to-earth guys you’d ever want to meet. He’d do anything for anyone,” his best friend Lance Nickel said, with a whole group of friends beside him nodding their heads in agreement.

A Hilton Head native with a meager beginning, Grady knew college was unlikely because of the family finances. Working as a volunteer firefighter at the Bluffton Fire Department, which provided “lots of love, but no money,” he landed his first job out of high school with the Sea Pines Fire Department at age 18. He was up against many older, more experienced applicants, but the chief saw the potential Grady offered. Part of his potential stems from an unwavering work ethic, the other from an instantly noticeable positive attitude. “I’m a go-getter, not a quitter,” Grady said, which is obvious if you know where he came from and where he is now. (Read on!)

Obtaining a college degree was important to him. He made enough money at the fire department to apply to and attend Coastal Carolina College in Myrtle Beach. There, in addition to earning his four-year business degree, he secured a position as a lifeguard with the beach patrol, where he could bask in the environment he so loved in his childhood. By age 21, he was the manager of the lifeguard company, all while, bartending, waiting tables, DJ’ing and attending school full time. He was making his way doing exactly what he loved to do.

One of the side effects of growing up in a home with little money is the lack of vacations and travel. “I had never been any place, so after I graduated college, me and some buddies traveled through Europe for six months. We slept on a roof in Greece; we stayed in hostels. We had the best time,” Grady said. From there he moved around always following his passions and turning them into jobs: Ski patrolling in Colorado, life guarding in St. Thomas, running all the pool decks (and one gift shop) back in Hilton Head, which led him to start a T-shirt company—Tradewinds—“with $200 and a great idea.” The company “got kind of big,” Grady understated. He had kiosks in malls up and down the east coast, selling a tremendous volume of T-shirts. With entrepreneur as his title, and solid success under his belt, Grady continued to follow his adventurous spirit and fly—literally.

“I always wanted to be a pilot. When I was little, and my mom would ask what I wanted for my birthday, I always wanted to go to the airport and watch the planes take off and land.” In 1995, Grady decided to fulfill that childhood dream and take flight lessons at the Hilton Head airport. He earned his pilot’s license and loved it! Of course he turned it into living.

At first, he gave aerial tours of the Lowcountry and piloted small charters. He then went on to be co-pilot for the Hargray Company jet and then chief pilot for the Malphrus Construction Company. This all came to a halt when construction crashed in 2010 due to the economy tanking. But Grady kept upgrading his pilot’s certifications, wanting to fly bigger, better, faster and beyond. In 2011, with the support of his wife to hold down the home front, Grady invested both significant time and money into earning a Gulfstream G5 series rating. In 2014, he upgraded again to G650 rating, Gulfstream’s largest—up to 19 passengers— and fastest business jet, with a top speed of Mach 0.925, which is more than 700 mph.

Grady now flies the most exclusive planes in the world, carrying the most exclusive people around the world. We’re talking about the uber rich set and Fortune 50 company executives and owners. Since January 1, 2017, Grady has been to Japan twice, New Zealand, Australia, Hawaii, Germany, Austria, Italy, Egypt, England, Spain and all over the United States as the pilot of the incredible 72-million dollar Gulfstream G650. “I enjoy being a pilot. I love to travel. The whole flying thing fits my personality and lifestyle. And, I love flying the G650; I am blessed to be able to fly it,” Grady said.
“I always wanted more. I only want the best,” he said, humbly. In this pursuit, it is obvious Grady is not on this path to impress others, and it’s easy to see it’s not about the money. Somewhere, from a very young age, he figured out that life was worth giving it all you’ve got. He may have come from “nothing,” but that didn’t stop him from becoming who he is today: a loving husband; a dedicated father; a true friend; a successful businessman; a respected, well-known pilot and a happy man. Somehow he found something out of nothing, and it instilled a drive in him that pushed him to soar. 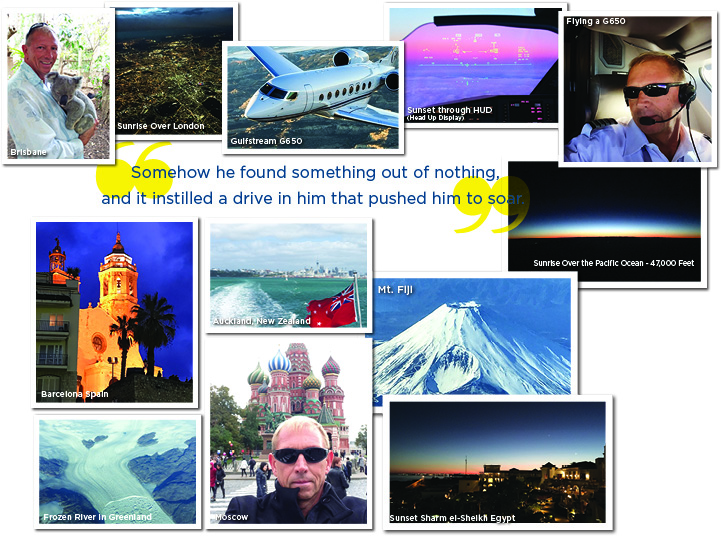 His friends agree: He’s thoughtful, the consummate gentleman and a good-hearted soul.
They told on him: “He’s such a good guy he flosses his teeth and takes his vitamins every single night, even if he’s had a beer or two!”

Flying Favs: “Every flight is a new adventure—weather, conditions, etc. I like a challenge and love to travel.”