Laughter and Love - A Genuine Performance 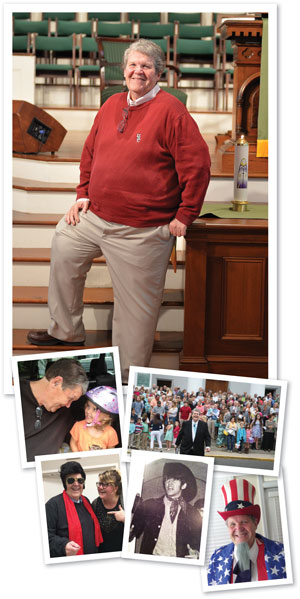 The celebration of joy and love are common threads throughout the Christian Bible. Psalm 126 reads: “Then our mouth was filled with laughter, and our tongue with shouts of joy.” 1Corinthians 16 reads: “Let all that you do be done in love.”

Dr. James Wooten, or Jim, as some of his congregation will address him, moves through life with a healthy dose of both—a deep love for the Lord, his family and congregation, and a jovial heart to match. “Humor is divine,” he smiled. “Don’t take yourself too seriously.”

He is a proud South Carolinian—born and raised! In 2008, he began serving as lead pastor at The Baptist Church of Beaufort, a 21st century church with an 18th century foundation. Rich in history, the building itself was first a Civil War hospital. Soldiers’ signatures and graffiti are still visible on belfry beams and sanctuary walls. The heart-pine wood flooring, glass windows and pristine pews are beautiful and original.

Dr. Wooten holds a Masters degree in Divinity and his Doctorate in Ministry from The Southern Baptist Theological Seminary in Louisville, KY.  When asked for a favorite Bible passage, he recalled his wedding vows, and the witty and wonderful way Philippians 4:8 was read by his soon-to-be wife.  “…whatever is true…honorable…just…lovely…think about these things.”  He laughed telling of his nervousness that day, and how his voice cracked when reciting his vows.

He met his wife of 44 years, Becky, while in drama together at Wade Hampton High School in Greenville. He was playing lead as Starbuck in “The Rainmaker” when they first fell in love. His eyes light up when he tells of how they were each dating someone else before a trip to a drama convention. Upon return, they were dating one another!  Both graduates of the University of South Carolina, their love for acting and hearts for service made them an ideal match. They have two adult children, Lee Ann and Grant, and a beautiful granddaughter, Avery.

Jim will occasionally bring his thespian flare to the pulpit, preaching dramatic monologues and dressing for the part. He has played Jacob in his church’s musical production of Joseph and the Technicolor Dream Coat and worked with the South Carolina Children’s Theater and the Pine Tree Players of the Midlands, to name a few. Rumor has it, Elvis, (a.k.a. Jim, with a wig and a thank-you-very-much scowl) once made an appearance at a Greenville diner, while fans took photos and requested autographs!

It is with this same enthusiasm and commitment that Dr. Wooten serves his congregation. Becky tells of a desk drawer and attic boxes stuffed with notes of gratitude for the difference his ministry has made. One important pastoral responsibility to Jim is funeral preparation. “Words should give honor and power to the unique person who passed,” he said. Perhaps it has something to do with losing his father at the age of 10.

“It is almost poetic,” Becky said, referring to her husbands’ personal and thought-filled funeral sermons. Jim remembers kneeling beside his father at an Episcopal church in Laurens, SC before his passing. It remains one of his fondest memories.

Baptism is also a sacred demonstration of love and renewal. Dr. Wooten smiles, explaining how in Beaufort their baptisms begin with a reverent parade, led by bagpipes, down Charles Street. In white robes, those to be baptized gather at the Beaufort River for a full-body water emersion.

His heart for mission work is evident in his travel to Bulgaria, Slovakia and the Virgin Islands, as well as many destinations closer to home. Laying groundwork for a sports camp ministry, bible school and necessary home repairs are only a few examples of his outreach. He explains a partnership with “Operation In As Much,” a national organization dear to his heart, which encourages every church member to get involved in a ministry for one great day of service!

Dr. Wooten laughed while recalling some wedding love stories. One of the first weddings he officiated was in an 100-year old church on a sweltering hot day. The unscreened windows were lifted for needed ventilation, when suddenly, lit firecrackers came flying in, popping and sparking, bringing the groom to his knees, shrieking!  Another couple knelt side-by-side, their faces toward the alter. From left to right, the grooms shoe bottoms read “HELP ME!” for all the congregation to see. Talk about laughter! Another couple asked Jim for a small wedding, just the two of them and a witness to make it official. When the ceremony was over, Jim was handed what felt like a thick envelope of cash. He laughed when in opening it, he found two, one dollar bills, with 48 bill-shaped pages cut from the Sears Catalog sandwiched in between!

This season of love has nothing on Dr. Jim Wooten. His joyous approach to life is a gift he enjoys giving every day.

Up Close:
Will You Be Mime? He performed as a mime for  Christmas performances in churches all across the state.
Presidential Education: Watched Jimmy Carter teach Sunday School in Plains, GA.
Music Fan: Son Grant plays in a classic rock band, Blackbeard’s Truck. By day, Grant is a successful chemical engineer.
Favorite Lawyer: Daughter Lee Ann is lead attorney for SC Human Affairs Commission.
Star Sighting: He introduced himself to THE “Dr. J”—Julius Irving.