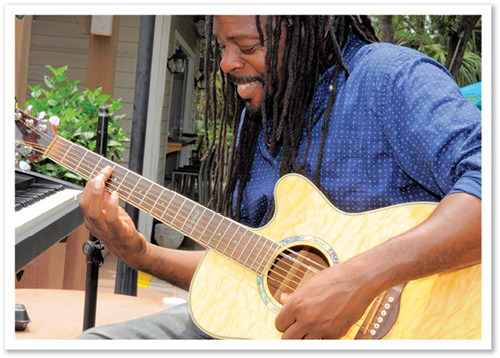 Darryl’s parents both served in the Air Force. Their careers landed them in Beaufort, S.C., where Darryl grew up. His dad was a singer; his mom was a concert base player. The seventh of nine children, Darryl was always surrounded by music.  At the tender age of three he recalls being astutely observant of his siblings playing piano. He began formal lessons at the age of five. One day, in first grade, he jumped out of the lineup for Mrs. Patterson’s music class, headed straight for the grand piano and began to play the Boogie Woogie.  Once he started playing, he realized he might be in big trouble. On the contrary, she encouraged him to keep playing while the rest of the students entered. The following year Darryl met Earl Davis, a legendary musician, who lined up every instrument in the musical spectrum and played each one, from the piccolo down to the tuba. Darryl announced to his classmates that he was going to do the same when he grew up. When his friend said he couldn’t do it, he became even more determined.  “That was the arrow point. That’s when I knew what I was going to do with my life,” he said.

When Darryl was 14 years old, he got a job as a weekend DJ at a local radio station. It was there that he learned to master recording techniques. A year later he had a chance meeting with Bill Pinkney, founder of the Drifters, a popular rock group of the ‘50s and ‘60s. Bill had come to the radio station to be interviewed.  As Darryl shook hands with him, out of his mouth poured, “Can I have a job?”  Bill invited him to come and play a show.  Soon after, the radio station was sold, and Darryl was let go.  Darryl started the eight-mile walk to his home on a cold winter day without a coat, carrying a cardboard box filled with his possessions.  A man named Rick Benson pulled up beside him and said: “You look like you just got fired!”  He offered Darryl a ride home.  As they talked, Rick learned about Darryl’s talents and aspirations.  Instead of taking him directly home, they stopped at Rick’s home, where he introduced Darryl to his wife.  Then he took him outside to a building that looked like a shed.  When Rick opened the door Darryl’s jaw dropped.  This was the finest recording studio he had ever imagined, complete with microphones and a grand piano. They ended up working together for several months to create some material to take to a recording company. Rick accompanied Darryl to Malibu, California, to record a three song demo in the renowned David Foster’s studio. One day they went sight-seeing in L.A. and ran into Wilson Pickett outside the lobby of Motown records.  After a brief introduction, Darryl was astounded to hear himself ask: “Can we write a song together?”  Wilson said, “Sure. Have your people call my people.” A year later, the song “Don’t Turn Away,” written by Darryl and Wilson was included on Wilson’s newest album. During this time Bill Pinkney called Darryl and offered him a contract to perform with the Drifters all over the country.  That became Darryl’s secret weekend and summer life. He toured with them for several years, until family priorities called him home.

Recently Darryl moved to Hilton Head Island from Nashville, where he had been working on writing and recording projects. He has sketched ten songs, which chronicle his life for the past three years and intends to soon record a new album. Darryl has mastered 27 instruments, including the entire string family, brass, woodwinds and percussion.  You can experience his genius music talent for yourself at Coligny Beach Market on Thursdays, Fridays, Sundays and Mondays from 6 p.m. to 9 p.m. He performs songs by a variety of artists, including Prince, Adele, Bruno Mars, and Keith Urban, which appeal to every age, as well as many classic and popular hits. When Darryl is not entertaining visitors and locals, he is busy in his studio creating music for commercials and films. Most recently, he collaborated with Chiwetel Ejiofor (12 Years a Slave) and James Caviezel (The Passion of Christ) in making the soundtrack for the movie Savannah, which can be seen on Netflix.

Darryl believes it is his sacred duty to inspire others the way he has been inspired and to help guide them the way he has been guided. He always finds the hearts and minds that inspire him. He says, “There’s never a finish line in anything you do. You can get run over if you just sit there.  It costs nothing to inspire someone to help themselves.  Inspiration is my longest creative push.  As I am inspiring others, I can see, through them, that I am actually inspiring myself, so my creativity is a wellspring.”