An Inextinguishable Heart for Service 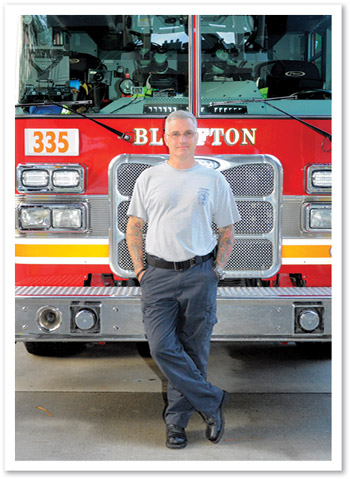 Bumblebee… How Can it Be? Your flight, a sweet surprise.
Such tiny wings, You work and sing. A tiger in disguise.

Recognizing what traits make us unique is the first step toward self-fulfillment. The second step, and more challenging reality, is the strength it takes to act in pursuit of those talents. Sadly, some never get beyond the ‘recognizing’ part, and that is a tragedy of spirit. However, Christopher Garniewicz’s spirit is quite intact, serving up life with passion and purpose. He has unpacked some pretty cool gifts of his own, right here in the Lowcountry. Originally from Worcester, MA, Chris and his wife of 20 years, Larissa (Lara) and daughter Hayden, have been permanent islanders since 1997. He serves proudly as a paid firefighter for the Bluffton Township Fire District, saying he feels fortunate to be part of this awesome team. Chris was introduced to firefighting by a friend’s father in the early ‘90s and was instantly “hooked.” He embraces this field with arms wide open and clearly has a heart for service. “I love doing things for others, and need nothing in return,” he said.

He graduated from Northeastern University with a Bachelor of Science degree in Design and Art History and is currently working on his Masters in Education. Chris admits he likes to talk, which works nicely with his love for acting. He met Lara in the world of theater when she was a student at Emerson College. “She was literally the beautiful girl next door,” he said.

The beauty of honoring ones gifts came early for Chris. Like the time in junior high, when a required home economics class helped him discover he could sew—quite well, in fact!  He earned money in college, offering up his talent to stitch theater costumes for campus productions.

It was in 2003, when Hayden decided she wanted to be a ballerina. Hilton Head Dance Theatre provided her lessons, and was also where Chris attended a tutu masters class, instructed by former ballerina, Claudia Folts. She may have looked at Chris sideways in a class typically filled with women, but was soon impressed after seeing his beautiful work. This month, Hilton Head Dance Theatre will present their production of The Nutcracker, and Hayden will be dancing in a spectacular tutu, custom made by her proud dad!

His sewing prowess extends beyond ballet tutus, as he’s had a hand at making boat sails, and he showed me a photo of an impressive leather riding saddle he made. Lara joked that her husband’s favorite phrase is, “How hard can it be?”  His response: “What would be the worst thing that could happen? You’d learn something about yourself you would not have known before.”

Artistry runs deep in Chris’ life, and he literally wears it well! Colorful and distinct tattoos adorn his arm and hands. His left bicep shows his first tattoo: a pair of mysterious blue eyes. A pretty girl representing Lara, and a tiny ladybug for Hayden, go with him everywhere. Chris and Lara have a phrase on their hands when put together, say, “Hand Made With Love.” It represents their love for each other and for Hayden!

Fearless…
Chris continues to learn about himself through giving his time to several charities across the region. One close to his heart is The National Fallen Firefighter Association in Charlotte, NC. This event includes a 110-story climb, while wearing most of his 60-pounds of fire gear. Firefighters carry the ID of one of the 343 fire fighters who died on 9/11, so they can “finally get to the top.”

“We climb because they climbed” is their motto. “Fight-for-Air Climb” out of Jacksonville, FL, is another fundraiser that benefits The American Lung Association. Chris trains hard for these events. His training space helps his “head-space,” as he calls it, and ZipLine Hilton Head on gorgeous Broad Creek provides him the physical space to work out. On Sunday, December 10, ZipLine is kindly hosting Chris’s upcoming fundraiser from 1 to 4 pm. This event will raise money for the “Fight-for-Air Climb,” and donations can be made online now.

Chris shares his firefighting expertise, lecturing on behalf of the State Fire Academy. He speaks on essential skills in the field, such as rope rescue, truck operation, ladder skills and forcible entry. He will speak at the International Technical Rescue Symposium in Denver, CO, presenting case studies and factual information from the field next month. It is clear giving back is important to him although it keeps him as busy as a bee.

Ahh…back to the bee: Chris loves the symbolism of the tiny-winged insect, whose body-to-wing ratio should mean their wings aren’t strong enough for flight. Why do bumblebees fly? Chris knows. Because no one told them they couldn’t.

Water-Logged: Loves to Scuba Dive with his daughter, Hayden

Tree Hugger: Has saved a total of 3 cats that climbed a bit too high

Head Banger: Listens to some serious rock while working in his sewing studio

American Lung Association’s Fight For Air Climb! Donations can be made at www.americanlungassociation/fightforairclimb—Look for Chris’ name!