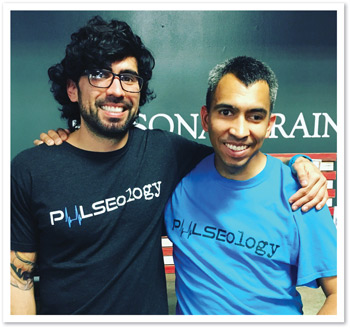 Mike Holmes and John Duberley are not just client and trainer at the Powerhouse Gym in Bluffton. They are friends, and they are a team. Both contribute to the success of the other, and both feel that the other guy is the real hero.

Mike is 39, a Native American from Florida, a Naval Academy grad, and a retired Marine Corps F-18 pilot. Nine years ago, he had quite a different life path in mind until a snowboarding accident in Utah nearly took his life.  Hitting a tree caused a serious traumatic brain injury and paralysis on his left side. He was in a coma for two months, then a wheelchair for two years. Life was bleak, even with his wonderful wife, Meredith, and their little girl, Nora.

John is 30, of Hispanic descent, a Navy veteran, born in California, but raised in Alabama. He completed a degree in electrical engineering in the Navy, but was looking for his niche in another area: fitness and physical training. He was the Command Fitness Leader in his Navy unit and interested in teaching others about the benefits of a healthy lifestyle. After the early death of his father, John was determined to become a physical trainer.

The lives of our October Motivational Men intersected in the Lowcountry two years ago through the Wounded Warriors program. The organization offered Mike the support he needed to contract with a personal trainer to help with his physical therapy. At the same time, John accepted a position with PULSEology, a physical training program, working in the Powerhouse Gym one-on-one with clients. The two men met and it’s been a win/win ever since.

Mike comes to the gym three times a week for hour-long sessions with John, working on strength, balance, and muscle recovery. Not able to drive—and not wanting to burden his wife with the responsibility of getting him to his appointments—Mike uses Uber to get to the gym. “I have to make a plan in order to get there on time each day,” he said. John has some clients who don’t always make their appointments, or who offer excuses for being late, but Mike is never absent and never late.
When I met with Mike and John they had just finished a workout session and were relaxing in the refreshment bar, Mike with a protein smoothie and John with a ground turkey, quinoa, and veggie bowl he had brought from home. Mike looked like anyone who had just finished a tough workout with a personal trainer: a little sweaty and tired, but relaxed and happy.

Mike’s speech was also affected by his brain injury, but he does quite well.  He confessed that he often has the words in his brain, but they just don’t want to come out. John was there to help, but Mike needed only minimal aid while sharing his story with me—one he was very enthusiastic to tell.
The latest adventure in Mike’s life was the birth of a second baby daughter in June. The big surprise was that she came so fast they didn’t have time to get to the hospital, and EMS didn’t make it in time. Mike helped his wife deliver sweet baby Sylvie, and he excitedly re-enacted the frantic calls with EMS. John smiled as Mike finished his story. “That’s another thing he’s done that I haven’t!” he said.
Mike’s recovery has been gradual but miraculous. He has progressed from a coma, cheating death, to being in a wheelchair, to using a walker, and now sometimes he is able to walk using only a cane.
With a great deal of work and concentration, his speech is returning. John is inspired at every workout by Mike’s determination to always give 100 percent and to never give up. “Too many people just aren’t really committed,” John said. “Mike is.”

The two friends have goals they each want to achieve. John does a lot of running in short races, but he wants to complete a full marathon in the near future. “Maybe Boston,” he said and laughed. “Another thing Mike has already done!” Both men are working on learning Spanish and practice speaking it with each other.

Mike’s goals are closer to home. He wants to be able to run with his daughters. John nods, and agrees Mike is going to get there on that goal. In addition to his gym sessions, Mike has other activities scheduled each week. He volunteers at the Bluffton Farmer’s Market with The Grind Roasters, and participates in horseback riding with Heroes on Horseback.

The two friends often meet for lunch at various local restaurants, and enjoy a little Navy vs. Marine rivalry trash-talking.

John admits that he has never had a client with Mike’s disabilities before.  He is learning a lot about traumatic brain injury patients, and how the right attitude toward life and physical goals can produce amazing results. Mike said without John he wouldn’t be making progress at all. John pushes him hard, he said, and he wouldn’t have been able to achieve the results that he’s seeing without John’s guidance. “Due to my brain injury I could never get a quality workout in. So it wasn’t worth going to the gym. Thanks to  PULSEology and the Powerhouse staff, now I can.”

It’s a perfect match for our two October Motivational Men, and one that is inspiring to others. A verse from the Bible Mike holds on to is: “For our light and momentary troubles are achieving for us an eternal glory that far outweighs them all.”  I Corinthians 4:17

Up Close:
John Duberley: can be contacted for PULSEology personal training at Powerhouse Gym, 843-706-9700.

Follow Mike’s blog at: www.holmesxc.blogspot.com where you’ll find lots of great pictures of his wife and two little girls.

Another Bible verses Mike likes to share: “I can do all this through Him who gives me strength.”  Philippians 4:13. Mike said, “This is one of my guiding principles.”