Lena Sotskova was born in Moscow. An only child and a descendent of generations of Russian aristocracy, she benefited from the immersion of art and culture through artists, musicians, and actors who frequently visited her parents' home. With classical music, paintings of old masters, and sculptures surrounding her, Sotskova's artistic and creative instincts gained life. 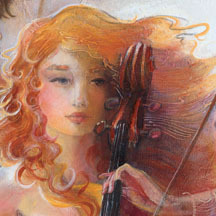 She started painting at the age of four. Studying music and art simultaneously, until the age of 17, Sotskova gravitated to the canvas. Her renderings celebrated her love for the fine arts through the continuous exploration of musicians and dancers as subjects. The painting featured on the cover, entitled "Inspiration 4", is a beautiful example of this. It is part of the "Inspiration" series, which was born in Rome under an influence of contrast between quiet corners of small cafÈs and inspired passion of music from Italian musicians, fast changed sunlight, and beautiful architecture.
Sotskova gained entrance into the most competitive art university in Russia.  She was among a selected few permitted to access archives of the Art Fund of Russia, which is closed to the public. She also gained entrance to the vaults of prestigious institutions such as The Hermitage, The Louvre, and royal palaces and cathedrals of Moscow and St. Petersburg. She was involved in the restoration of rare pieces of art that were damaged during the Moscow fire of 1812 in the war with emperor Napoleon Bonaparte.

After years of formal education, she moved to New York City, where the vibrancy and excitement coursed new life, impulse, and enthusiasm into the veins of her art. Not only did her creativity take flight here, but her career as an artist grew, as well. While there, she and two partners opened Hermitage, an art gallery on Long Island. Almost immediately, the gallery and her work gained intense popularity.

Lena spends anywhere from one to three months on each oil painting, infusing her heart and soul into each work of art. Collectors began buying her paintings faster than she could create them, and six years after opening Hermitage, she sold the gallery to focus her efforts on creating and selling her own works.

Lena presently resides in Miami, Florida. She knows that being in a state of comfort is destructive to the creativity of an artist, so she is constantly at work, in the further development of her unique art style, never repeating herself in her paintings, always evolving to the next, more superior level in every new piece. This drive is evident in all the awards she has won; some of her most treasured are: 2006 - Academician of International Greci-Marino academy, Professor of arts; 2007 - Inclusion in International Encyclopedia of Modern and Contemporary Art; "Leonardo da Vinci Award 2009" For high-level artistic skills, cultural engagement in World Modern Art through national and international publications; and, inclusion in "Gold International Register 2012" and title "Great Master and Honorary member" of Italia in Arte association.

Lena's work is exclusively represented by Green Apple Group, a company owned and headed by her husband, Sergei. Selected collections of Lena's art can be found on Royal Caribbean International cruise ships, Princess cruise line, and others all around the world. For more information about Sotskova's work, please log onto: greenappleartgroup.com and sotskova.com.