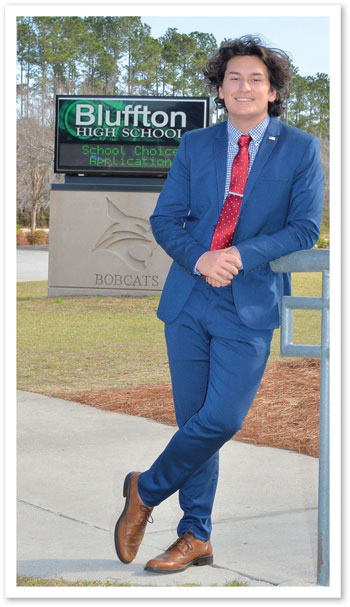 Walking into meet 18-year-old Decker Paulmeier, I had no clue how I would feel interviewing someone closer to my age, but I soon realized, millennial to millennial, I was impressed. Decker sharpened my thoughts, made me think and left me refreshed, knowing I had probably just met the smartest teenager in my life.

Decker, a soon to be Bluffton High School graduate this spring, and I began relating on the subject of high school, and he lit up. “I love high school; I am very involved. I’ve been taking AP courses since freshman year, trying to do my best.” Decker is very involved indeed. He is a part of sports, student government and school clubs. He is the captain of the varsity lacrosse team, as well as a football player. He is involved in youth government, the president of the National Honor Society, on student council, Bluffton’s DECA chapter president, a member of Boys State, won first place at the Sea Island Science fair his freshman and sophomore year, and lastly, participates in quiz bowls for Bluffton High School.

Decker took all these opportunities and strived to be the best in all of them, which has certainly paid off. He is the first student from Bluffton High School to be accepted into and committed to going to Stanford University near San Jose, Ca. According to www.admission.stanford.edu, the numbers for acceptance for the class of 2021 look like this: 44,073 applied; 2,085 accepted; 1,708 enrolled. Stanford was the only college application he filled out.

“Getting in has a fun story attached to it,” Decker said. It was on a field trip, back in December, to the upstate of South Carolina for a challenge to design a car that could endure the race, 24 hours of Le Mans, which he won. Decker knew his acceptance email was coming on this day, on the bus ride back. He was about an hour from being home when the email was received, congratulating Decker on his acceptance to Stanford. Immediately, Decker shared the news with everyone on the bus, including his engineering teacher, who he considers a mentor. He then called his parents and his two sisters, who were filled with instant joy. When he got home, extended family and friends, were waiting anxiously to hear the news. “It made me so humble when I got the acceptance email. I felt so honored. I felt like I was basking in the limelight, and it felt pretty amazing,” he shared.

When asked, “Why Stanford?” He simply replied, “It’s always been my dream. The thing I am most looking forward to is the students. It’s an honor to be considered among the other future Stanford students. I look forward to conferences, where I can express my opinion, and someone challenging me back. The people aren’t just diverse in their looks, but in their backgrounds and thoughts, and it will be interesting to see how we all got here. Also, Stanford offers me opportunities in technology and politics, two of my passions, so I get the best of both worlds. Overall, at Stanford, everyone wants to be the best, and that’s what I want. I want to be the best!”

Growing up, Decker’s parents pushed him and his sisters to strive for excellence. He explained, “To my parents, excellence is the norm. If you’re not doing two sports, five clubs and still getting A’s, then you’re not working hard enough. The role of my mom (most know of Decker’s mother—Orchid Paulmeier, owner of One Hot Mama’s on Hilton Head Island) and my sisters in my life is influential. You think I did a lot? My sister’s resumes are even longer, making me a proud brother. My mom does so much too, they are my motivators. They keep me honest and true to myself. They push me to always do more.”

With Decker’s grandparents being from The Philippines, and his mom, a first generation immigrant, he comes from courageous roots. He explained, “My grandparents bravely moved to America so their children could succeed. They abandoned everything they knew... I was inspired. Now by doing my part, by doing well, getting into Stanford, I am thanking my roots and taking a step towards repaying that debt.

His family aren’t the only ones who have high standards for Decker, he holds himself accountable to achieve his goals. “I set goals for the day, the week, the month, and I’m always pursuing them. My goals keep me honest and make me think every time I am doing something, ‘Is this going to help me get to my goal?’ My peers are living life how they want right now; I just have to live how I want now. Younger people don’t think they can make an impact. You can get to wherever you want to go if you work hard enough. You must work to create opportunities for yourself. It doesn’t matter where you’re from, take risks, pay attention to every detail, it’s your life.”

Weekend Vibes: When Decker has spare time he is catching up on sleep, working out, hanging out with friends and reading, but his most recent project he does on weekends is building a greenhouse.

Current Book: The Road to Serfdom by F.A. Hayek

Favorite Book: None in particular. I love a lot of books.

Describe yourself in 3 words: Bold, Loud and Innovative