The Timeless Expressions of a Wordsmith 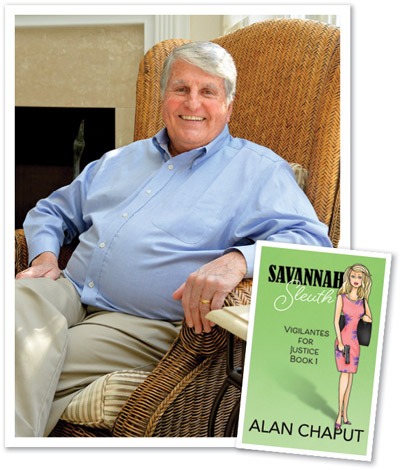 It’s not every day a girl receives a pearl necklace, especially on her first encounter with a new friend. But it’s also not everyday one meets the charming Alan Chaput, a local book author with a real appreciation for the written word.  “I consider myself, first and foremost, a storyteller,” he smiles. Indeed! Our time together confirmed this, as speaking with him gave me a flavor of his writing style; he’s deliberate with his words and moved our conversation comfortably from one subject to the next. Originally from Cleveland Ohio, Alan moved to the Lowcountry in 2001, lured in by the beautiful beaches and warm surroundings.

A voracious reader, Alan has always had a love affair with books and the places they could transport him. Yet it’s only since his retirement 25 years ago that his affection for reading transformed into excitement for writing. Once he began, Alan was hooked.  He sent queries to agents, attended writing conferences and placed his work in a multitude of contests. Alan has ranked nationally as a finalist in several of his entries. The Romance genre is where this author began his book-writing career. The most popular genre to date, the romance novel enthusiast reads an average of 17 books a month! Yet it was a colleague who remarked to him how much mystery and suspense seemed to be common threads in many of his romantic works. He agreed, and transitioned to more mystery and suspense-themed writing.

This new venture was exciting, and led to his current project series, Savannah Sleuth, Vigilantes for Justice. It’s the first of four novels centering on main character and matriarch, Patricia Falcon. She’s a justice-pursuing, pearl-wearing, gun-toting blonde, with a perfect combination of strength and southern charm.

Our Pink Magazine staffer, Lindsay Gifford, had this to say about this fun page-turner, “Alan Chaput knows how to spin a great mystery! With twists and turns…he had me guessing ‘who done it’ until the very end. I can’t wait for Volume 2!” Savannah Secrets, the next book, comes out this month, followed by Savannah Justice in October, and Savannah Passion in 2019.

Patricia is written in the first person. I, of course, felt compelled to ask, “How is it that you can write from a female point of view?” His response made us both smile, “I suppose I just got in touch with my inner woman.” He proceeded to compliment his lovely wife of 22 years, Terri. “She is caring, kind, patient and loving. Women have an understandably different approach to everyday life,” he states. Though he did not model Patricia after Terri, Alan said her female perspective was essential. His love for her and appreciation of women serves him well in this and other works.  Alan then explains that his Mystery genre writings are in a sub-category called ‘Cozy Mysteries’. These are characterized by several elements: An illustrated book cover; no swearing; no sex; and no graphic violence.

Alan Chaput’s art definitely involves a bit of puzzle-play—an unraveling of facts and circumstances that open up to even more intrigue and a desire for resolution. He remembers working in the marketing department at Dow Chemical back in Ohio. When faced with the task of confronting his sales team, Alan would create a moral hypothetical as an indirect way of confrontation. Situations were simply puzzles in need of solving; facts to be parsed, and conclusions to fashion. One could say a mystery, in need of a satisfying solution.

He continued with some sage advice: “Two things a good writer must do,” he said. “Write every day. Every day! Do you need a plot? No. Characters? No. Just start!  Oh, and find a local writer’s organization, too.” Alan is presently involved with Island Writers Network on Hilton Head, greatly enjoying the camaraderie. Their sole purpose is to support, inspire and mentor local writers. Any range in experience is welcome. www.islandwritersnetworkhhi.org

Creativity and dimensionality are not only weaved into his writing, but also presented through his love for social media expression. Yes, he posts daily on Facebook, Twitter, Instagram and even Pinterest.  When people comment on his submissions, Alan beams, “I love it!” He’s created a daily log, with six categories of photos, videos and quotes. The typical Facebook day begins as follows: Sunrise: photo/video; Coffee: sentences of inspiration; Writers Shot: more inspiration; Love Letter: one sentence to Terri;  Savannah: photo;  Sunset: photo. Beautiful!

When you have a love for the written word, as sincerely as Alan Chaput, there is no end to the creativity. He hopes the characters, intrigue and excitement of his words will keep us coming back for more!

Run-Bike-Run: Trained for and completed 25+ Biathlons!